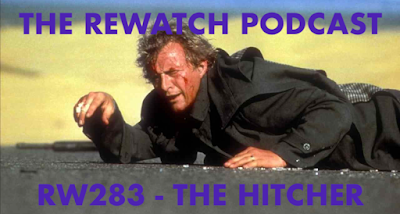 In this episode of The Random Rutger Rewatch, Cory and Nathan pick up the wrong guy at the right time as they discuss "The Hitcher."

In early drafts of the script, John Ryder had been described as skeletal in nature and so actors like David Bowie, Sting, Sam Shepard, Harry Dean Stanton, and Terence Stamp were mentioned.

The original script was long enough to make a three-hour film. Scenes that were never filmed include: Ryder slaughtering an entire family, an eyeball appearing in a hamburger (this was replaced in a finger in a plate of French fries), a graphic sex scene between 'Gal' Galveston (the girl before Nash) and Jim, and a character being decapitated. The film underwent several rewrites which removed the gorier moments.

Eric Red, (writer), said that the film was inspired by The Doors song, "Riders on the Storm".

In Rutger Hauer's book "All Those Moments," Hauer discusses how producer Ed Feldman settled on Sam Elliott for the role of John Ryder. Hauer states that "Apparently, Elliott was so scary when he came in to audition that Edward S. Feldman was afraid to go out to his car afterward." Sam Elliott had a scheduling conflict and had to back out the role.

For the role of Jim Halsey, the producers mentioned Matthew Modine, Tom Cruise, and Emilio Estevez. They agreed on C. Thomas Howell and liked his look. At the time, he was being more selective with the roles he took and heard that the script was a generic thriller. Harmon personally gave Howell a copy of the script. He could not put it down and "couldn't believe the things that happened to my character in the first 12 pages. I knew I wanted to do it". He also wanted to work with Hauer. Unbeknownst to Hauer, Howell found him "frightening, intimidating, and that he was in a constant state of fear, almost as if he really was John Ryder and I really was Jim Halsey".

C. Thomas Howell admitted that he was actually afraid of Rutger Hauer on and off the set because of the actor's general intensity.

C. Thomas Howell considers this movie to be one of his personal favorites.

Rutger Hauer did a lot of the stunt driving throughout the movie which amazed the film crew and even the real stunt drivers.

While performing the last bit of the windshield stunt Rutger Hauer knocked out one of his teeth with the shotgun he held in his hands.

Jennifer Jason Leigh agreed to do the film because she wanted to work with Rutger Hauer again (they co-starred in Flesh + Blood (1985)) and loved the character of Nash because "there was a real person there".

This is one of the few films that Roger Ebert gave zero stars to. When he and Gene Siskel denounced the movie for its violence on Late Night with Johnny Carson, Carson asked them if they were opposed to censorship, and Ebert replied, "Of course! The film should be made, it should be shown, and it should not be attended by anybody.

Entertainment Weekly ranked this as the 19th scariest movie of all time.

A remake of the same name, produced by Michael Bay and directed by Dave Meyers, was released on January 19, 2007, which starred Sean Bean as John Ryder, Zachary Knighton as Jim Halsey, and Neal McDonough as Esteridge. The remake added a female protagonist named Grace Andrews, who was portrayed by Sophia Bush. In the film, Andrews survives, while Halsey suffers Nash's fate. The movie was released to generally negative reviews.

Starting in September (on Friday the 13th), Cory and Nathan will be rewatching the entire "A Nightmare on Elm Street" series of films. We hope you'll join us!

Posted by The Rewatch Podcast at 7:56 AM No comments: