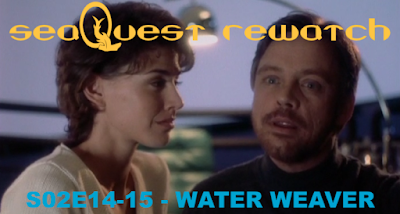 In this weeks episode of The SeaQuest Rewatch, Cory and Tom come face to face with gods and monster as they discuss season 2 episodes 14 & 15, "Watergate" and "Dream weaver."

While investigating a mountain in the ocean in the hopes of drilling into it in order to lessen the weight of it which could cause it to collapse, the SeaQuest picks up a singer on her way to a USO your to entertain the troops. Ortiz becomes infatuated with the singer, Sarah Toenin, while Henderson shows signs of jealousy, at one point forcing a kiss upon him which he rebukes. Later while Sarah performs a short concert, she stops and becomes possessed and begins speaking in tongues with a man's voice, only to suddenly stop and pass out.


Lucas’s research shows that the mountain isn't actually a mountain but rather an ancient pyramid that got covered by years and years of rocks and vegetation, giving it the illusion of a natural mountain.

As the SeaQuest nears the mountain, an apparition of a horse appears and shocks many crew members, least of which is Henderson, who after seeing it, has a vision of herself with snakes in place of her hair just like the ancient Roman goddess Medusa. Luckily, the apparition disappears and leaves behind a pile of sand.

Soon, tremors begin occurring and the SeaQuest warns the mountain inhabitants to evacuate before it collapses into the sea. As the rocks fall, the shaking opens up an ancient tomb and the SeaQuest is sucked inside from the water pressure and come face to affect with an apparition of the god Neptune and a statue that looks amazingly like Sarah.

Sarah comes up to the bridge explaining that Neptune wants her to come home, saying that he thinks she is Minerva and that Henderson is somehow channeling Medusa who thought Ortiz was Neptune, which explains why Henderson was jealous of Sarah when Ortiz showed signs of liking Sarah.  Bridger refuses to accept that they need to go with Neptune and begins heading towards Minerva’s temple, and despite being grabbed at and trapped by the giant apparition, manages to shoot off enough torpedoes to release the spirit of Minerva who approaches and embraces Neptune as the SeaQuest escapes.

Safely out of harm’s way, Sarah performs another concert in which Henderson and Ortiz get a little closer and share a kiss.

The singer in this episode, played by Dawn Robinson, is named Sarah Toenin. According to healthline.com, Serotonin is a chemical nerve cells produce. It sends signals between your nerve cells. Serotonin is found mostly in the digestive system, although it’s also in blood platelets and throughout the central nervous system. Serotonin is made from the essential amino acid tryptophan. This amino acid must enter your body through your diet and is commonly found in foods such as nuts, cheese, and red meat. Tryptophan deficiency can lead to lower serotonin levels. This can result in mood disorders, such as anxiety or depression.


Sarah was played by Dawn Robinson and while she does act from time to time, she is best known as a founding member of the R&B/pop group En Vogue. She recently appeared in an episode of Empire, but before that she hadn’t acted since 2011.

My Lovin (Never Gonna Get It) (more well known #2 hit)

Charles Noel is listed as The Preacher, the hologram character. He’s only had four credits, one of which was a David Bowie movie called The Man Who Fell To Earth in which Noel played the Doctor (albeit uncredited).

The SeaQuest finds itself disabled when a comet crashes in the ocean and seemingly disappears but actually was covering the SeaQuest in a cocoon that enabled an alien to emerge and begin hunting down its prey, a brilliant scientist named Tobias LeConte, a colleague and long time friend of the visiting astronaut Scott Keller.


While the crew attempts to hunt the creature down it does manage to get a few good attacks in against Ortiz, Dagwood, and Henderson, the last of which however was dragged away despite ONeil’s best efforts to save her. Once they get a bead on the alien they are able to flood the tubes and save Henderson, followed by the restoring of the ship’s power.

As they try and determine if the alien is still on board they see security cam footage of Henderson attempting to break through a door into the launch bay however the figure suddenly shapeshifts into the alien revealing a power they didn’t know it had. The alien/Henderson travels to Tobias’s classroom and under the ruse of a romantic interest gets close to him and then shapeshifts and attacks him, as the SeaQuest crew show up and scare it off.  Tobias then reveals that he himself is one of the shape shifting aliens who came to earth long ago as a fugitive who would not participate in his cultures practice of war and domination over all others and as a result, his people are hunting him down.

The alien/Henderson shows up again trying to get to Tobias again but she finds the crew ready for her. Instead of shape shifting, the alien just casts off the body of Henderson as it and Tobias begin a fight which ends up with them both on the roof, and eventually the alien missing his attack on Tobias and falling to its death on the ground below.

Tobias decides to leave earth because his people will continue to search for him and offers Scott Keller the chance to come with him and explore the galaxy to which he readily accepts and they leave to begin their journey.

The Triangulum Galaxy is a spiral galaxy 2.73 million light-years from Earth in the constellation Triangulum. It is catalogued as Messier 33 or NGC 598. The Triangulum Galaxy is the third-largest member of the Local Group of galaxies, behind the Milky Way and the Andromeda Galaxy. It is one of the most distant permanent objects that can be viewed with the naked eye.

Mark Hamill is Luke Skywalker from the Star Wars franchise as well as the arguably best voice of the Joker from the Batman animated series. He has racked up a ton of voice acting work over the years but we’ve seen him before in Flash ‘90 in the two episodes involving The Trickster. More recently he was the voice of Chucky in Child’s Play. He was also producer and director of Comic Book: The Movie.