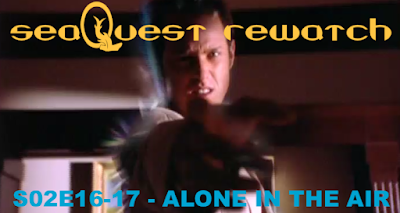 In this weeks episode of The SeaQuest Rewatch, Cory and Tom attack the mind and the soul as they discuss season 2 episodes 16 & 17, "Alone" and "Something in the Air."

Psychic attacks around the world on UEO officials by a man calling himself The Avatar lead to all psychics being rounded up and placed in prison camps. Wendy is spared this fate due to her special security classification and the fact that she sensed the start of the attacks and agreed to help find the man responsible.


While at a UEO safehouse, the Avatar attacks again, this time putting secretary General McGath into a coma. The guards mistake the attack as coming from Wendy and pursue her as she escapes, eventually making her way to a former mentor, Professor Bingham, who gives her a special device he created that will amplify her psychic powers and help her face The Avatar, who again appears to Wendy and gives her the location of where he is, asking her to come join him.
Wendy takes a shuttle to find him with the Seaquest crew following close behind. The colony where the Avatar is located begins attacking due to its automatic defense systems but the SeaQuest is able to fend them off. Wendy, Ortiz, Ford, Henderson, and Lucas find the Avatar's body, along with dozens of others all in comas, however the Avatar, in the facility ever since he was involved in an automobile accident, seems to be repairing and rewriting his damaged neural pathways with his psychic powers.


Wendy decides to confront him but a strong psychic wave appears and extends outward affecting the Seaquest causing it to go haywire leading Wendy deciding to join the Avatar in his mind in order to save her crewmates.

Once inside his mind, she meets the man behind the Avatar, who believes his dreamworld to be the only thing left in existence, fated to be tortured instead of being treated, and attacking his torturers in the dream, not realizing he was affecting the real world outside. Wendy manages to finally get through to him but needs him to rebuild his own neural pathways and allow his physical body to revive due to her physical body dying while her mind has been in his psyche. The man manages to do just that in the nick of time and thus also saves Wendy as her mind returns to her body.

Raphael Sbarge played The Avatar. He’s best known for playing Dr. Hopper on Once Upon A Time and a lead role in Murder in the First. He has had so many guest roles in some hit TV series over the last 20 years, including  24, Hawaii 5-0, Blacklist, The Good Wife, Longmore, NCIS, Law and Order and  Better Call Saul. An interesting fact is that he did the voice of Dr. Zei in the animated series Avatar: The Last Airbender. We've seen him before in the Quantum Leap episode “Animal Frat” as Will, one of frat bros.


Joe Seneca played Prof. Bingham. This role was one of his last but he appeared in various movies and TV shows as a guest, including Malcolm X, The Blob, Mo Better Blues, The Cosby Show, Golden Girls and Doogie Howser. He was formerly a singer with a group called The Three Riffs based in New York.

Michelle T. Carter was in this episode but IMDB is not clear on who she was. She was in two episodes of Seaquest but neither credit give a character name. She has to be either Reporter #1 or Aide. Scanning through the episode I saw no sign of a reporter so she likely was an Aide but had no lines. Looking ahead to her next Seaquest episode which deals with a presidential threat, I am assuming reporters would be involved. She did play reporter Penny Jensen in the Sliders episode “The King Is Back”, in fact, her audition for Sliders is online:

Something in the Air:

The Seaquest sends a team to meet with a group of researchers at an old abandoned research facility in order to study a 6000 year old chest that was recently discovered however when the chest is opened they find it to be seemingly empty. Later that night, one of the researchers is murdered, her body completely drained of blood, while Dr. Sommers translates the markings no the chest leading them to believe they have released an evil power and until they can recapture it, they will stay in the facility.


The crew manages to access camera surveillance of the facility and sees the murder of the researcher, discovering that she was actually killed by what looks like to be Commander Ford, resulting in Doctor Crichton, the lead researcher, to attempt to shoot him, but is instead stopped by Brody.
Before anyone can react a scream elsewhere in the facility leads them to discover Dr. Sommers attacking a fellow researcher, drinking his blood ala Dracula-style. They pursue the possessed Dr. Sommers and despite minor injuries, they eventually manage to stun and secure her.


The crew concoct another plan to try and lure the evil being out, reasoning that it seems to attack when they are asleep and more easily taken over. The plan ends up not working, leaving the non corporeal being to wander the site. Another plan is decided based on more translations of the chest writings that indicate that the spirit needs air to survive and they decide to try and trap the evil spirit in the vacuum of the airlock.

Dr. Crichton, dealing with his own personal problems with his wife and their divorce, gives up on his marriage and decides to lay down and go to sleep, allowing the demon to try and possess him. The possessed Crichton runs from the crew, but with some small part of the researcher remaining aware, he grabs the ancient chest and forces himself into the airlock, closing it. With the absence of any oxygen inside, the demon finds itself drawn out of Crichton and back into the chest which magically closes, saving everyone, but with the unfortunate result of Dr. Crichton dying in the vacuum left behind.

Sandra Hess played Karen. She had many guest roles in police procedural dramas as well as a brief run in General Hospital. We've seen her before in the Sliders episode “Genesis” as Marta, and as Lisa Rockford in the Lois & Clark episode “Super Mann.” She was also Sonya Blade in Mortal Kombat: Annihilation and Shada in Beastmaster 3. She was also in Nick Fury: Agent of Shield as Viper/Andrea Von Strucker.


Kearny was played by Lewis Arquette. He is the father of Patricia, Rosanna, Alexis and David. He’s done a ton of TV guest spot work, including The Waltons and Rocky Road, as well as animation voices for Camp Candy (a John Candy vehicle) and Japanese animated projects like Akira and Sherlock Hound. We've seen him before as Father Muldooney in the Quantum Leap episode “The Right Hand Of God.”

Peggy O’Neil played Dr. Kaufman. She was in the Seaquest episode “When We Dead Awaken” as Anita. She’s done a ton of anime voice work.