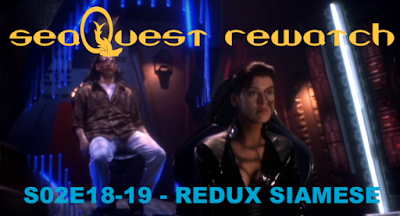 In this weeks episode of The SeaQuest Rewatch, Cory and Tom are breaking out and sneaking in as they discuss season 2 episodes 18 & 19, "Dagger Redux" and "The Siamese Dream."

As O’Neill questions his life choices, leading him to wonder if he should retire from service, Mariah, the Dagger that led the revolt at the Gelf Colony gets broken out of prison by a man who has vowed revenge on the UEO and wants her help to destroy the SeaQuest.
The breakout however causes problems for the SeaQuest due to the fact that the escape involved an advanced robot made to resemble Ford, leading them to begin an investigation.


O’Neill, now resigned from the SeaQuest, is spending his time trying to paint pretty girls at the pool and scenery at the park when he is approached by a very flirty Mariah and not recognizing her, flirts back, until she tases him and takes him captive.

Back on the SeaQuest, Doctor Smith is upset that the captain didn’t refer O’Neill to her so she could try and help him through his malaise, however her annoyance is interrupted when she suddenly has a psychic vision of O’Neill and a man that she can only identify as the marauder. Lucas fills in the blanks about a famous and talented hacker named the marauder who disappeared after a series of high profile jobs.

O’Neill wakes up on the Marauder’s ship, being piloted by Mariah, and after some heavy duty shocks to his system, he gives up the navigational stealth codes for the SeaQuest. Mariah uses The Marauders special trillium torpedos to attack the SeaQuest, causing heavy damage to the ship and to Captain Bridger who gets a concussion. Ford takes command and despite some insubordination from Brody, his gamble manages to flush out Mariah and her ship before she then launches the Marauder’s secret weapon, a squid that can feed on the SeaQuest’s bio genetic hull.  Ford manages to shake the squid off by literally hitting it with a rock and gives the order to fire on Mariah but she contacts them, showing them she has O’Neill. Ford consults the recovering captain who tells him they don’t negotiate with terrorists but to trust his instincts which lead him to letting the Marauder and Mariah go in exchange for O’Neill but with the promise that they will find them again.

Trillium (2 L’s) is a genus of about fifty flowering plant species in the family Melanthiaceae. Trillium species are native to temperate regions of North America and Asia, with the greatest diversity of species found in the southern Appalachian Mountains in the southeastern United States. Trilium (one L) is a “new recycled color” trademarked by the company Dekton, a manufacturer of “ultra compact” surfaces.
Luca Bercovici played The Marauder. He has had a good number of roles but nothing in particular that really sticks out. He has done a lot of work as a producer, including three episodes of 12 Monkeys (listen to the podcast 12 Monkeys Uncaged). He also played a pirate chieftain in Rockula, also starring Dean Cameron of 80’s movie fame (Ski School) and Toni Basil (Hey Mickey).


One of the UEO guards was played by Brett Rice. He will return as another character next season, and among his small handful of roles he did play Kenneth in an episode of Thunder in Paradise. He also played a small “dad” part in a TV movie called Shake, Rattle and Roll: An American Love Story.

Dean Cudworth is credited as Another Guard.

The Old Man was Richard Casey and has only 7 credits to his name, three of them being Thunder In Paradise and a movie called Frankenhooker.

When Piccolo and Dagwood both have the same disturbing dream, Dr. Smith recommends taking them to some old friends at a parapsychology institute to try and investigate the incident. Once there, Smith is greeted by an old friend, Laura, and an old flame, Clay, who has no qualms about reading people’s minds and to whom Piccolo immediately takes a strong dislike. They suspect that Piccolo has some psychic ability and recommend a study that will help him develop it. The procedure goes wrong whoever when Clay begins to project frightening images into Piccolo’s mind, leaving Dagwood to use his strength to open the machine.
Meanwhile back on the SeaQuest, the crew is working on switching out their syntium missiles when they receive word from Clay and Wendy that since Piccolo is so distrustful of Clay and uncomfortable in the facility, it would be better if they could come on board and conduct the tests there. Bridger agrees but is concerned about Clay, asking Lucas to discover everything he can about him and they soon discover that Clay is one of the world's most powerful psychics and even predicted world changing events, relishing in his ability and lording it over people with arrogance. He also appears to have not aged at all despite decades having passed between pictures they discover.


When Clay realizes that Smith is trying to figure out how Clay has changed, he attacks her psychically, knocking her out and then using his abilities to have the SeaQuest’s medical doctor to keep her incapacitated. He then takes control of Dagwood and Lucas in order to gain access to the syntium missiles which contain the liquid he needs to power his modified body and continue staying young as he believes himself to be the next great evolution for humankind.

Bridger and Ford work out Clay’s plan but then are locked out from stopping him as Dr. Smith psychically summons Piccolo and the two meet up with Bridger, explaining she needs Piccolo’s psychic ability to help defeat Clay.

Unfortunately Clay has succeeded in getting access to the missiles and removes the syntium from the warhead as the nitrogen detonator falls to the floor and begins leaking. As Smith tries to psychically communicate with Clay, pleading with him to stop, he orders Dagwood to break the control panel so no one can get in. Piccolo uses his newfound psychic ability to contact Dagwood and convinces him to stop, as Smith finally gets through to Clay and he allows Dagwood to open the doors. As they rush in to save Lucas and Dagwood, they notice that the syntium container has been dropped and has leaked, slowly moving towards the leaking nitrogen capsule and they rush out of the room, leaving behind Clay and Dagwood as the two chemicals meet and explode. Luckily, Dagwood is strong enough that he is able to resist the bomb for the most part but Clay is killed. When asked if there were any others out there like Clay, Laura responds that there are others but she doesn’t know who they are.

Syntium is an oil lubricant for cars, manufactured by the company Petronas.

Clay was played by Todd Allen. He also played Sheen McMasters in Wyatt Earp and had a bit part in Django Unchained as Dollar Bill.

Laura was played by Tamara Tunie. She is still a working actress appearing recently in Almost Family, which co-stars Timothy Hutton and Brittany Snow, the little girl who talked with Dagwood on the street when he was accused of murder. She was also in 223 episodes of Law and Order, 1221 episodes of As The World Turns, and appeared in 24 as Alberta Green.

Dr. Roberts was played by Robert “Bob” Small. He was a lead in the movie PulseBeat (rival health club owners enter an aerobics competition to see who’s superior). He’s had a few other roles in shows such as Miami Vice, more recently was in a few episodes of Ballers, as well as the movie Holy Man starring Eddie Murphy.

If you're a fan of 80's aerobics, here's the videos we discussed in the episode-