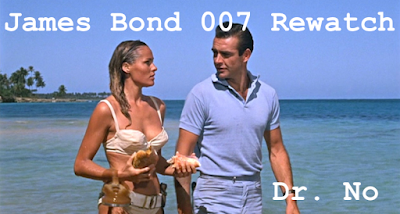 In this episode of the James Bond 007 Rewatch, Cory and Nathan face their first villain as they discuss "Dr. No."

The Music of Dr. No:

This was chosen to be the inaugural movie in the James Bond film franchise as the plot of the source novel was the most straightforward. It had only one major location (Jamaica) and only one big special effects set piece.

Harry Saltzman and Albert R. Broccoli, the original producers of the James Bond movies, cast Sir Sean Connery because they liked how he was a big, tough-looking man who nonetheless moved gracefully ("like a cat").

The budget was only one million pounds sterling, but when costs went over by one hundred thousand pounds sterling, United Artists wanted to pull the plug, fearing it would never make a profit.

The first scene Sir Sean Connery filmed as James Bond is the sequence in the Kingston Airport where he passes a female photographer and holds his hat up in front of his face. The filming date was January 16, 1962.

All of the sets and furniture were slightly smaller than they would be in reality, so that Bond would look larger.

Contrary to popular belief, Sir Sean Connery was not wearing a hairpiece in his first two outings as James Bond. Although he was already balding by the time Dr. No was in production, he still had a decent amount of hair and the filmmakers used varying techniques to make the most of what was left. By the time of Goldfinger (1964), Connery's hair was too thin and so various toupees were used for his last Bond outings.

Sir Sean Connery is morbidly afraid of spiders. The shot of the spider in his bed was done with a sheet of glass between him and the spider, which can be seen in one shot in the movie. When this didn't look realistic enough, additional close-up scenes were reshot with stuntman Bob Simmons. Simmons reported that the tarantula crawling over Bond was the scariest stunt he had ever performed. According to Steven Jay Rubin's 1981 book "The James Bond Films", this tarantula was named "Rosie".

Maurice Binder designed the gun barrel opening at the last minute, by pointing a pinhole camera through a real gun barrel. The actor in the sequence is not Sir Sean Connery, but stuntman Bob Simmons. Connery didn't film the sequence until Thunderball (1965).

It is a long standing misconception that John Barry wrote "The James Bond Theme". It actually originated from a song, "Good Sign, Bad Sign" composed by Monty Norman, from an aborted musical, "The House of Mr. Biswas". Barry arranged and orchestrated Norman's theme to produce the theme as it is known throughout the world.

The armorer who gives Bond his Walther PPK at the start of the movie is Major Boothroyd, who in the next movie, From Russia with Love (1963) was played by Desmond Llewelyn. Beginning with Goldfinger (1964), the "armorer" would forever be known as "Q" (for "Quartermaster").

Author Ian Fleming wanted his cousin Sir Christopher Lee to play the role of Dr. No. (Lee appeared as Francisco Scaramanga in the Bond movie The Man with the Golden Gun (1974), and would play the character that inspired Fleming to create Dr. No, Dr. Fu Manchu, in several movies.)

Bond send his regards "From Russia with Love"