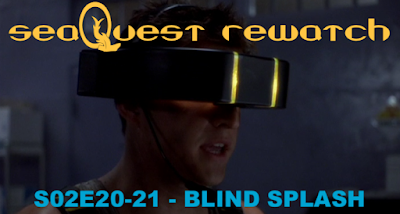 In this weeks episode of The SeaQuest Rewatch, Cory and Tom outrun the unseen to far away places as they discuss season 2 episodes 20 & 21, "Blindsided" and "Splashdown."

When Eddie, an old cell mate of Piccolo’s has a sudden problem with his gills, both he and Piccolo are sent off for a check-up to make sure everything is ok. On the way however, Eddie hijacks the plane they are on, wanting to have his freedom since he was sent back to prison for a crime in which a military police officer died. The plane crashes in the jungles belonging to The South American Confederation, a country that is in the UEO but is suspected of not being on the up and up about their scientific and weapons research. While the two try to get their bearings, Eddie lets Piccolo know he was incarcerated because he accepted a plea deal in order to cover up the real person behind the crime, an admiral’s son, and once said son was out of trouble, Eddie was given the shaft and sent to prison for much longer than he was supposed to be.
As Piccolo listens, an invisible force suddenly sweeps in and grabs Eddie, carting him off. Piccolo tried to follow but his weapons have no effect on the invisible being save rendering it temporarily visible for a moment before disappearing as the confederation shows up  and arrests Piccolo for being behind enemy lines.


Bridger and company watch a staged recording of Piccolo admitting to spying on Colon under Bridger’s orders, and discuss how to solve the situation with the Secretary General. In the end, they decide to send in the best of SeaQuest to break Piccolo out. Ford, Brody, Henderson and Ortiz come upon the invisible being and despite all of them firing on it full force at the same time, it barely makes a scratch on the creature and it runs off. The following break in goes well but once inside they discover Piccolo has managed to escape from his cell and within seconds alarms go off and the crew is discovered and imprisoned, leading Colon to threaten Bridger and the UEO.

Meanwhile, Piccolo, trying to find a way out overhears Colon and his men discussing Eddie who somehow survived his encounter with what they call The Prototype, a creature they created but lost control of. Colon orders his men to study Eddie and experiment on him to see if they can replicate the gills procedure for themselves.

Piccolo discovers inert beings that look similar to the invisible being and hacks a computer to get in touch with Lucas for his expert help. Elsewhere, Ford and company are surprised when something begins attacking the guards and then rips the door from their cell, as the invisible being appears and reveals that he is being controlled by Piccolo who has learned how to control the suits via a VR remote control. The crew wants to escape back to their ship but Piccolo says he needs to find Eddie, and with their help, they rescue him, taking down Colon in the process. Piccolo then asks Secretary General McGath to take another look at Eddie’s case, implying that something was not right with his sentence and what happened and he agrees to do what he can.

Colon was played by Juan Fernandez. He’s had many supporting roles, most notable of which are Crocodile Dundee II (Miguel), The Collector (main cast), and La Soga in which he plays a general named Colon.
There are no IMDb credits given for the general or doctor in this episode.

Eddie’s cellmate was played by Hank Stone. We’ve seen before as Cop #1 in The Flash ‘90 episode “Fast Forward.” He has also appeared in an episode of the Martin Kove series Hard Time On Planet Earth as well as 1995’s The Walking Dead. Most recently he played Jack Frost in Santa Girl (starring Barry Bostwick as Santa).

When the crew receives a message from their old friend Scott Keller who took off for deep space with alien refugee disguised as human Tobias LaConte, they head for a rendezvous point to find him and are shocked when a giant spaceship appears and pulls the Seaquest up out of the waters and into the alien ship, only to then jump through a wormhole to then be deposited back under waters on an alien planet.
Tobias and two Hyperions meet them and explains that Scott was taken captive by the KrayTaks and Stormers during a civil war between them and the native population of Hyperions. The KrayTaks and Stormers had already attacked the planet by melting their polar ice caps to cause flooding worldwide, killing off the majority of the population and now are using technology to pull a comet off its course to come down and destroy the survivors. The SeaQuest successfully fights off and destroys a KrayTak attack vessel but receives an incoming message showing Scott being held as a prisoner before being executed before their eyes.


Lucas, channeling his inner Han Solo, says he has a bad feeling about this whole thing, that it seems too improvised, or not fitting together right, more alien than it appears and so Bridger orders Piccolo and Darwin to investigate the wreckage, finding the presumed dead man Scott Keller, who explains that everything they have been told has been a lie, that the KrayTaks are the very people that Bridger and crew have been helping, misled by a stormer posing as Tobias, the real one of which was unfortunately recently captured. Realizing they know the truth now, the imposter reveals his true form but is taken out quickly.

Bridger takes a group with him to rescue Tobias, finding him easily, and then setting charges to destroy the ship's reactor core, but their escape is blocked when the Kraytaks appear from one side and begin shooting and  the Stormers appear from the other side to attack as well.

Meanwhile back on the Seaquest, Ford orders Lucas, Darwin, and Dagwood to take the Stinger and escape while he arms all weapons and prepares to attack the alien ship but their vessel is suddenly heavily damaged by an attacking barrier mine, and sinks, destroyed.

Back in the alien vessel, the away team's escape shuttle is destroyed leaving Bridger no choice but to order the destruction of the alien ship lest they get away and go to Earth to conquer it next, and thus gives the final command of his life as Lucas and company watch in terror as the day is saved, but at great cost. Later, Lucas and Dagwood find themselves on a life raft, pondering what will be their next move.

Kristy Eisenberg played Ariel. She has three other credits on IMDb and she will reappear in the third season opener as well as another episode called “Reunion.”
Tom Nowicki played Mithor. He’s still a working actor, most recently appearing in The Glorias; a movie based on feminist Gloria Steinem’s autobiography. He actually works a lot, including a 1994 appearance on an episode of Thunder in Paradise. He also played a coach in Waterboy and Lincoln in the Thomas Jane’s The Punisher.


The young girl was played by Brittany Snow. She was the young girl Dagwood talked to when he was accused of murder.

Marisa Vitali was listed as another Hyperion but it’s unclear which character she was in the episode. She is the last one on the cast list so presumably she was more of an extra than a major player.

Getting into the final season of SeaQuest, we'll be discussing the premier episode “Brave New World."


We've also announced our next 2 rewatch series! We hope you'll join us for the single season of FIREFLY, followed by DAWSON'S CREEK!