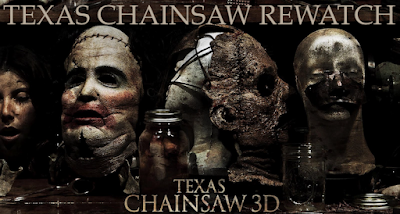 In this episode of The Texas Chainsaw Rewatch, Cory and Eoghan have things to do with their cuz as they discuss "Texas Chainsaw 3D."

In 2007, Platinum Dunes announced they were abandoning the series following The Texas Chainsaw Massacre: The Beginning (2006). In 2009, Twisted Pictures negotiated a multi-picture deal with Robert Kuhn and Kim Henkel, who own the rights to the series.

In May 2011, Lionsgate announced that it would be partnering with Nu Image to produce the new Texas Chainsaw Massacre, and that John Luessenhop would direct the film.

Originally, a plan for a new trilogy was pitched. The films would be released out of chronological order, with the second film coming out first and being set almost entirely in a hospital. The next film would be a prequel explaining the events that led up to the hospital scenario. The third film would complete the storyline. Fearing it was too ambitious and risky, the producers opted for a follow up to the original instead.

Sheriff Hooper is named after Tobe Hooper, the creator of The Texas Chain Saw Massacre (1974).

In an interview with Collider, Alexandra Daddario said she didn't want to say the line "Do your thing, cuz," because she felt it was too silly. Then the producer told her the entire movie is supposed to be silly, so she ended up saying it.

Following the formula previously established, we go from redo to prequel, let's find out where cuz got his money in Leatherface.

Posted by The Rewatch Podcast at 1:07 PM