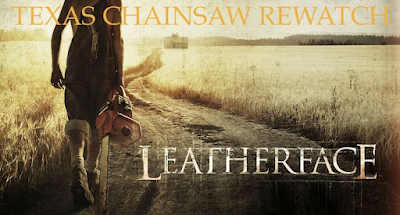 In this episode of The Texas Chainsaw Rewatch, Cory and Eoghan are running and hiding in plain sight as they discuss "Leatherface."

The first Texas Chainsaw Massacre film not to be filmed in the United States. Instead, the film was shot in Bulgaria for budgetary reasons.

This is Tobe Hooper's final film as a producer before his death, from natural causes, on August 26th, 2017.

Lili Taylor in this film plays Verna Carson, a character first seen in Texas Chainsaw 3D (2013). In that film, she was played by Marilyn Burns in a small role as the elderly Verna, who played the final girl Sally Hardesty in The Texas Chain Saw Massacre (1974).

Stephen Dorff plays Sheriff Hal Hartman in this film, who is the father of Burt Hartman from Texas Chainsaw 3D (2013).

Stephen Dorff and Lili Taylor previously acted together in I Shot Andy Warhol (1996) and Public Enemies (2009).

While it's not mentioned in the film itself or the credits, Ted's last name, as confirmed by the screenwriter, is Hardesty, making him the father of Sally and Franklin.

Due to Texas Chainsaw 3D (2013) being filmed in 2011, and this film being shot 2 years earlier in 2015, Lionsgate actually had lost the rights to the franchise by the time this came out. This was their final TCM film, despite having the rights to make upwards of 6 films.

After reshoots had been completed, the film premiered on DirecTV before having its limited theatrical run. The World Premiere was on 25 August 2017 at FrightFest in London.

Taking a step back and once again heading to another studio, we get a very late direct sequel to the original TCM with 2022's The Texas Chainsaw Massacre.

Posted by The Rewatch Podcast at 1:43 PM