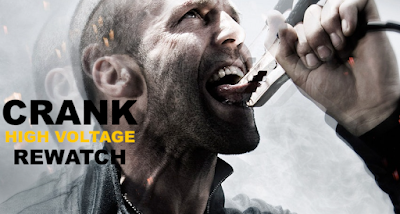 In this episode of The Crank Rewatch, Cory and Eoghan have a shockingly heart racing discussion about "Crank: High Voltage."

After the modest success of Crank at the box office, especially off the back of DVD sales, its directors Mark Neveldine and Brian Taylor were approached by Lionsgate Films to direct a sequel. Neveldine and Taylor refused, explaining that the idea "sounded ridiculous" and "kinda lame" as they had already "killed" its protagonist. They stayed on as writers, and decided to direct when they fell in love with the script.

Jason Statham was the one who really pushed for it. Producers suggest the script was never read by the studio and they just greenlit.

Specialty rigs were also developed for the film, one of which was a piece of speed rail bent 180 degrees and mounted with a total of eight cameras that lent a bullet-time look reminiscent of The Matrix.

Mike Patton (of Faith No More) composed the original score.

Keith Jardine: The Concerned Man who is seen very briefly asking Chelios if he's okay. He’s  a UFC mixed martial artist. Jardine is wearing a shirt that says "MEAN 1". This is appropriate as Jardine's in-ring nickname is "The Dean Of Mean".

Chester Bennington: The tattooed man Jason Statham rubs up against at the horse track is the lead singer for Linkin Park. He also appeared briefly in the original film as the guy in the hospital pharmacy who tells Chelios about the nasal spray.

Maynard James Keenan: The man with the control to the electric shock collar is the lead singer of prog-metal band Tool.

Danny Lohner: The man accompanying the owner of the shock collar that Chev Chelios steals is Danny Lohner, of Nine Inch Nails and various other industrial projects.

Heading into and across spooky season, we're delving into another infamous franchise and discussing everything Texas Chainsaw Massacre.