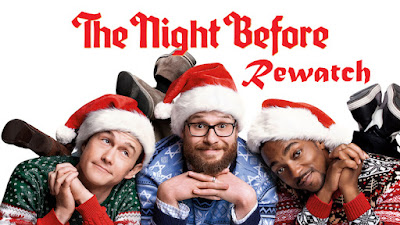 In this Christmas episode of The Rewatch Podcast, Cory and Eoghan have big plans for an all out party. Merry Christmas to all, and to all The Night Before.

This was Seth Rogen and Joseph Gordon-Levitt's second collaboration with director Jonathan Levine. The first was 50/50 (2011).

This was Seth Rogen and Lizzy Caplan's third collaboration. They worked together in Freaks and Geeks (1999) and The Interview (2014).

This is the second collaboration between Anthony Mackie and Michael Shannon, the first being 8 Mile (2002).

This was Joseph Gordon-Levitt and Michael Shannon's second collaboration. They previously worked together in Premium Rush (2012).

Director Jonathan Levine revealed on Collider that a lot of the film's comedy was improvised, and the dramatic moments were per the written script, which he admitted was more like an outline guide.

While the world (I assume) is queuing to see the James Cameron's epic Avatar 2, we're going to watch something else that he wrote, and Katryn Bigelow directed, Strange Days!

Posted by The Rewatch Podcast at 12:00 PM