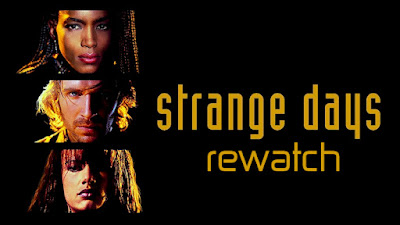 In this New Years episode of The Rewatch Podcast, Cory and Eoghan playback, hijack, and jack in as they discuss Strange Days.

Director Kathryn Bigelow found that no existing camera system could accomplish the shots necessary for the point-of-view sequences, so the research division of Lightstorm Entertainment (the company of writer/producer James Cameron, who was Bigelow's husband at the time) spent a full year designing and fabricating a special camera for the production. Weighing only 8 pounds, the 35mm camera literally fit in the palm of the hand and featured interchangeable lenses, remote follow focus, and video assist (necessary since the camera had no viewfinder). The camera was then mounted on a SteadiCam-style portable rig, which gave the camera stability and mobility similar to the human eye.

The opening sequence of the film was shot at four separate locations, as one contiguous location could not be found. The cuts between shots were disguised by rapidly panning the camera around. Due to the pace of the scene, the sound men could not effectively record any of the actual sound on the set. All of the sound and dialogue in the sequence had to be overdubbed during post production.

The character of LAPD Chief Strickland is likely inspired by real-life LAPD Chief Daryl Gates who became notorious for his mishandling of the Rodney King beating of 1991 and the Los Angeles Riots of 1992, which occurred when the officers who had beaten King - an event captured on video by a bystander - were acquitted by an all-white jury. Much of this film takes its themes from those two events.

The cartridges used for the "clips" are Sony MiniDiscs while "SQUID" decks are retrofitted Sony MiniDisc players, a new technology introduced to the public in 1994. Discs were engineered to be recordable and re-recordable but sales of the technology, which came with a high list price, were poor and the line was abandoned by the company.

In one scene (around 1 hour 43 mins) Angela Bassett yells at Ralph Fiennes, "This is your life, right here, right now". The dialogue was sampled by British DJ Fatboy Slim and used in the hit song, "Right Here, Right Now" (1999).

Judging by his birth and death year listed in the news report about his murder, Jeriko One is a member of the "27 Club", a collective of entertainers who have passed away at the age of 27. Other members of this club include Janis Joplin, Jimi Hendrix, and Jim Morrison. The latter is the frontman of The Doors, whose second album is entitled "Strange Days".

Watch this space while we get our 2023 organised!

Posted by The Rewatch Podcast at 1:03 PM