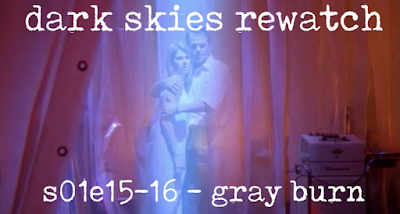 In this weeks episode of The Dark Skies Rewatch, Cory and Tom lure in their enemy and make a quick getaway as they discuss season 1 episodes 15 & 16, Shades of Gray and Burn, Baby, Burn.

A young Juliet chases a ball into the woods of Gorky Park, Moscow, where she encounters a Gray Alien that uses his telekinetic powers to pull the ball towards him.

At Majestic, John checks out a gun so he can do some weapons practice. Albano reprimands John and complains to Bach about them being there, leaving Bach to wonder why he does in fact let him live. John challenges Bach and plays his only bargaining chip, the decoder disc Juliet found in her husband’s diary. With Halligan's help, they realize they can summon an alien ship by using the decoder to create a new crop circle.

While making the crop circle, they find the farmer’s young daughter, named Monica, in the woods. John and Kim get her safely back to her home, while Monica mentions her mother recently left and became an angel.

Back at the crop circle, John requests the gold plate he found during his first crop circle mission, and Kim uses her newfound extra sensory perception to place it at the correct place within the circle. While they wait at night for a ship, Kim wonders why they’re working with Majestic, and John tells her his plan of working with Majestic in order to take it over from the inside.

The circle works and a Gray ship appears, with one of the aliens beaming down. Albano and company immediately capture the alien, but the ship shines a beam and flips their vehicle, allowing the Gray to run away. John shoots at it, getting a hit in before it escapes. Kim convinces Bach to let her and John find the Gray, using her abilities.

Meanwhile, Monica finds the injured Gray who communicates with her, telling her that he is an angel, and fooling the girl into wanting to help by saying he can take her to her mother if they find the gold plate. She finds the plate and begins carrying it back, but is interrupted by John and Kim who recapture the alien despite Monica’s cries to stop and attempt to burn down the barn.

Halligan begins working on the Gray, extracting the Ganglion and nursing the alien back to health, noticing a glow from the head, possibly a healing effect. Within minutes, Halligan notices that the incisions he made has healed, and Kim has a vision that shows the Grays playing with children, gaining their trust so they will willingly go with them when the Singularity happens. Kim see’s Monica in her vision, prompting John, and a visibly shaken Juliet, to head back to the farm. As they drive, John confronts Juliet about her reaction and she reveals her past of being taken by the Grays to play with other children.

Upon arriving at the farm, they discover that Monica is no longer in bed. They track her down in the field, running towards the crop circle where a Hive ship awaits. John and Juliet tackle her, saving her from beaming up. Monica pleads with them to let her go so she can be with her mother. Juliet explains that her mother is always with her, and Monica’s father apologizes for not being there for her.

Returning to Majestic, Kim reveals what she’s learned from the Gray that they had a society similar to humans, and lost to the Hive. They wonder why the alien is communicating with her, and John theorizes that it’s because they both went through the same ordeal. Kim senses however that there is something else the alien is hiding, and it reveals to Kim that she is pregnant.

History As We Know It:

Jamie Renee Smith played Monica. She’s had quite a few roles (about 60), and the majority of them one offs and lower cast list credits. She did star in Children of the Corn: The Gathering (straight to video in 1996), and was a supporting cast member of a one season show called Ask Harriet. She was also a lead in Magic in the Mirror, and Magic in the Mirror: Fowl Play (an Alice in Wonderland style adventure). 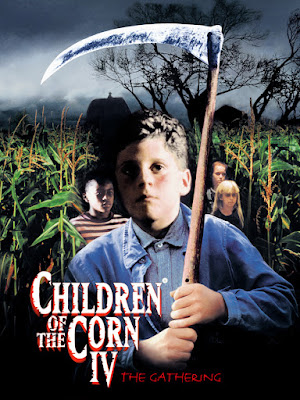 In Los Angeles, 1921, a young construction worker named Simon Rodia is attracted by a glowing red light, and discovers aliens working in an old building. He then sees a Hive ship overhead, and experiences a vision of a double helix. The man seems to become possessed and begins obsessively building something.

Ten months have passed in the present time, as Kim reflects on her pregnancy. She tells John she wants her baby to be born in California, an off the cuff comment that surprises even herself.

Halligan talks with Bach about Kim’s health status, and shows him a picture that she has been drawing all week, a sketch of the Watts Towers, built by Simon Rodia, that look similar to a DNA double helix. Bach pushes John to get Kim to California, where a specialist doctor named Merrick can oversee the birth. Merrick is described as the best of the best, and will be prepared to see any abnormalities that may show up during the long overdue delivery.

Meanwhile in Watts, California, a young African American man named Marquette Fry is pulled over on suspicion of drinking and driving. He’s arrested by officer Lee Minikus, resulting in members of the community pushing back against the police. Anger boils over on both sides, and within hours the entire community mobilizes and begins rioting in protest.

Steele, also in Watts, heads to the facility built by Simon Rodia, and tells Hive doctors that Kim has arrived.

Back at Majestic, the Gray, having lain dormant the last ten months, suddenly wakes, escapes its hyperbaric chamber, and starts to destroy the lab.

As Kim and Juliet talk, a light shines from outside the hospital window. Juliet is thrown across the room, and Kim is enveloped in the light and once again abducted.

John is adamant that they use the Roswell translation device to try and communicate with the Gray, leading Bach to send in Albano. The alien communicates his frustration, feeling that Kim betrayed him somehow. The Gray also shows Albano a picture of the double helix that Kim had been drawing.

John talks with a man named George, whose wife was also abducted by the Grays, and is in the hospital for their pregnancy as well. George recognizes Kim’s drawing as the Watts Towers, and offers to take John and Juliet there, given that he is known in that community. However, upon seeing John and Juliet, their car is attacked by rioters, leading them to escape on foot and take refuge with George’s brother-in-law.

Meanwhile, Steele approaches Kim, who appears unaware of where she is, and the doctors begin their procedures on her and the baby.

John and crew make it to the towers at night, and spot Steele. John tries to stop a man from burning down the building Kim is in, but they rip off his mask and find out he is white. Before he can be beaten, John wrestles himself free and runs into the burning building, fighting off the Hive agents, and eventually finding Kim. Her baby is gone and she seems unfazed, saying that “we” had to take him, indicating she’s again been taken over by the Hive, as she and Steele are beamed away.

Eventually, John manages to communicate with the Gray and they both mourn the loss of Kim.

History As We Know It:

Director Stephen L. Posey did a lot of one-off episode directing on series such as Babylon 5, Xena, Hercules, Space: Above and Beyond, Buffy, Star Trek: Deep Space Nine and many more. He’s mostly known for his work as a cinematographer, and amongst his many credits are some real standout horror classics, including Bloody Birthday, The Slumber Party Massacre, and Friday the 13th: A New Beginning.

The Watts Riots had been building up for years due to the treatment of African American citizens in the LA area and started after a policeman arrested a young man named Marquette Frye on suspicion of drunk driving. Frye’s mother came to the scene and scolded the boy for his actions but things escalated and resulted in the riots beginning. They lasted six days and caused more than 40 million dollars in property damage. Lee Minikus was the arresting officer and was represented in the episode.

Sabato Simon Rodia (Sam) was an Italian immigrant who created the Watts Towers because he wanted to create something “big” using junk and things that he happened to find. It is the world's largest single construction created by one individual, and was his obsession for 33 years, finishing them in 1954. He called it “Nuestro Pueblo” or “Our Town”.

They were made of steel covered with mortar and embellished by the decorative finishings of mosaic tiles, glass, clay, shells and rock. There is no welded inner armature. Rodia wired rebars together then wrapped this joint with wire mesh and hand packed it with mortar and his mosaic surface.

In 1959, the International Conference of Museum Curators resolved that “Rodia’s Towers are a unique combination of sculpture and architecture and the paramount work of folk art of the 20th century in the United States.” The Towers are listed on the National Register of Historic Places, are a National Historic Landmark, a State of California Historic Monument, a State of California Historic Park and, in March 1965, the Watts Towers were officially designated as Los Angeles Cultural Heritage Monument Number 15.

For more information on Dark Skies, please check out these great resources of information.

There is a full playlist of Dark Skies episodes. Account is active as of Dec 2022.

Posted by The Rewatch Podcast at 1:26 PM