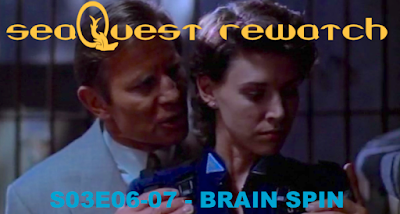 In this weeks episode of The SeaQuest Rewatch, Cory and Tom are a chip off the old prison block as they discuss season 3 episodes 6 & 7, "Brainlock" and "Spindrift."

As a vote is looming for a new UEO charter that would ensure the continuation of the organization, President Bourne of the Macronesian Alliance has gone on the attack to try and disband it.


While Brody and Fredricks escort the President’s ship, they come under attack from two UEO subs being controlled by old teammates of Fredricks. She breaks off from Brody and engages them, ultimately taking them down and completely out.

Fredricks defends her decision to engage and also attempts to explain why Brody did not follow her to engage but he chooses to rebuff her help and ends up insulting her in the process which results in Hudson putting Fredricks in charge of the mission, despite knowing Brody wasn’t at fault.

Meanwhile Fredricks begins to feel fear and contacts the doctor who gave her the implant who updates it for her, and unbeknownst to her, reprogramming it so she follows commands given to her from Larry Deon himself, the first of which is a plan to assassinate Secretary General McGath, hoping it will take down the UEO permanently.

Fredricks tries several times to fight back against the reprogramming but is not successful due to the doctor constantly monitoring and reinforcing his commands. At one point Fredricks threatens Brody’s life before giving him his new orders and when he brings the incident up to Hudson he relieves him of the security detail and sends him back to SeaQuest.

Meanwhile Ford and Henderson are dealing with their relationship issues which include not just the secrecy of it, but also her newfound interest in helping Piccolo learn how to read.

Later when Brody opens his new orders later he discovers a chip similar to the one implanted in Fredricks. With Lucas’s help they manage to override her programming, releasing her and allowing her to confront Deon without being under the influence of the chip. As they fight, she ends up falling over a railing, hanging on for her life while the fear once again overtakes her but Hudson shows up, knocking Deon out while helping Fredricks find her true courage.

Deon gives a statement implicating President Bourne but is shot by his former henchman Mason Freeman who was cheated out of money by him. Deon is sent to intensive care with surgery scheduled, his fate unknown while McGath gives Fredricks a medal of commendation for her actions in the crisis, after which she breaks down and finally, after two years allows her feelings to come forth and has a good cry.

The Doctor was played by Tom Nowicki who we last saw attempting to destroy the SeaQuest. He played Mithor, one of the bad guy leader aliens in the second season finale.


Noonan was played by Michael Deeg. He only has a handful of credits, including Beer League and Kabukiman. We last saw him as Trigg in the Little Shop Of Horrors episode of SeaQuest called “By Any Other Name.”

Nichols was played by Christopher Miles. He has only three credits, but we’ve seen him before in the SeaQuest episode “Sympathy for the Deep” as a manager.

Michelle T. Carter is back. We saw her in the Avatar episode of Seaquest titled “Alone.” She is known to us from Sliders as reporter Penny Jensen.

At 8:55 Captain Hudson tells Larry Deon that a pro athlete "belongs in Toronto". Michael Ironside is from Toronto.

As Henderson returns on a shuttle to the seaQuest, she answers a distress call from some children whose parents from the Spindrift coalition, a group of smugglers and merchants, had been injured on their ship after it had been attacked by Macronesian forces. Unfortunately the ship is in Macronesian territory and after Henderson rescues the children she is confronted by Macronesian soldiers and arrested on suspicion of espionage and kidnapping.


As Henderson is mistreated and jailed, Hudson receives orders from McGath to rendezvous with him so they can go see President Bourne and negotiate for Henderson’s release, rather than sending in the Seaquest to liberate her in order to avoid a declaration of war.

At the welcoming party for Macronesia’s various world wide heads of state, Bourne makes a deal with McGath to release the children and to find Henderson not guilty of kidnapping and espionage in exchange for a lifting of the embargo on metals that was imposed on Macronesia due to human rights violations.

The trial begins and all goes as was agreed to, however a twist is thrown in as even though Henderson is innocent of kidnapping and espionage, the judge declares she is not innocent of smuggling contraband, referring to the controlled pharmaceuticals the children’s parents were smuggling out of Macronesia when they were attacked, and she is sentenced to death.

Henderson, back in her cell, tries to connect with a young Macronesian teen, but it is to no avail as the boy has bought in fully to the propaganda that President Bourne has been spreading. Still the more the two interact, the more he begins to see Henderson as less of a faceless enemy and more of an actual person.

Despite McGath’s protests, Hudson decides to officially take leave of the service and rescue Henderson, joined by Brody, Piccolo, and O’Neil. Their attempt to make it past the Macronesian defense is thwarted however resulting in them going in disguise as members of the Spindrift crew, selling their wares. As they watch Henderson being brought out for her execution, Bourne recognizes the disguised SeaQuest officers and a commotion begins to break out as they pull their weapons and begin an assault on the guards, freeing Henderson and escaping from the room.

The group manages to make it back to the airlock to their shuttle when they are attacked by a large contingent of Macronesian soldiers. Just as one of the soldiers is about to fire a cannon at the crew, he is knocked out by the boy Henderson talked to in her cell. His victory and assistance is short lived as he is quickly shot by Bourne’s right hand man. As he aims a kill shot at Henderson, Brody jumps in the way to save her, and the crew escapes, dragging Brody’s unconscious form with them.

Safe back on SeaQuest, the doctors operate on Brody but it is to no avail as he speaks his last words to Henderson and succumbs to his injuries. Later in her quarters she asks Hudson what Brody’s last words meant to which he explains that “With your shield or on it” was something Spartan mothers said to their sons going off to war, meaning that you come back alive with your shield or honored as a fallen soldier carried on the shield to his home, adding that Brody honorably gave his life so that she could live hers.

Vanadium is a chemical element with the symbol V and atomic number 23. It is a hard, silvery-grey, malleable transition metal. The elemental metal is rarely found in nature, but once isolated artificially, the formation of an oxide layer somewhat stabilizes the free metal against further oxidation. It is mainly used to produce specialty steel alloys such as high-speed tool steels. The most important industrial vanadium compound, vanadium pentoxide, is used as a catalyst for the production of sulfuric acid. The vanadium redox battery for energy storage may be an important application in the future.


Karen E. Fraction is back as Dr. Perry. We saw in her in “Brave New World” and also as a reporter back in the Dagwood murder episode.

The Boy has no official character credit on IMDB but he's Trevor St. John who is currently starring in Roswell, New Mexico which is set to start airing its second season in just a few weeks. He has done a ton of TV movies (possibly from Lifetime) in the last two or three years. Previous major roles include 201 episodes on One Life To Live and playing Jan in the TV movie Beach Boys: An American Family.

The Chief Justice was played by Robert Catrini who was most recently in Birds of Prey. Before that he had a bit part as Kyle’s boss in The Room Actors: Where Are They Now? He’s made a name for himself as a guest actor on TV dramas over the last couple decades including Buffy the Vampire Slayer, NYPD Blue, 24 and True Blood. He even played a part in the movie After Different Strokes: When The Laughter Stopped. This Seaquest episode appears to be his first role.

Posted by The Rewatch Podcast at 3:24 PM