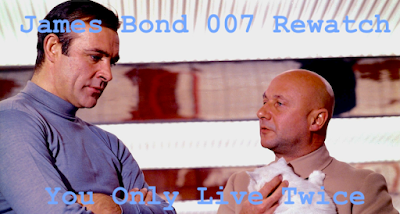 In this episode of the James Bond 007 Rewatch, Cory and Nathan find the man behind it all as they discuss "You Only Live Twice."


The Music of You Only Live Twice:

You Only Live Twice premiered at the Odeon Leicester Square in London. It was the first premiere of a James Bond film that Queen Elizabeth II attended. The film grossed $43 million in the United States and over $111 million worldwide.

Unlike most James Bond films featuring various locations around the world, almost the entire film is set in one country and several minutes are devoted to an elaborate Japanese wedding. This is in keeping with Fleming's original novel, which also devoted a number of pages to the discussion of Japanese culture. Toho Studios provided soundstages, personnel, and the female Japanese stars to the producers.

While scouting locations in Japan, the chief production team narrowly escaped death. On March 5, 1966, Producers Albert R. Broccoli and Harry Saltzman, Director Lewis Gilbert, Cinematographer Freddie Young, and Production Designer Ken Adam were booked to leave Japan on BOAC flight 911 departing Tokyo for Hong Kong and London. Two hours before their Boeing 707 flight departed, the team were invited to an unexpected ninja demonstration, and so missed their plane. Their flight took off as scheduled, and twenty-five minutes after take-off, the plane disintegrated over Mt. Fuji, killing all aboard.

When the time came to begin You Only Live Twice, the producers were faced with the problem of a disenchanted star. Sean Connery had stated that he was tired of playing James Bond and all of the associated commitments

Jan Werich was originally cast by producer Harry Saltzman to play Blofeld. Upon his arrival at the Pinewood set, both producer Albert R. Broccoli and director Lewis Gilbert felt that he was a poor choice. After several days the part was recast with Donald Pleasence.

The theme song, "You Only Live Twice", was composed by John Barry and lyricist Leslie Bricusse and sung by Nancy Sinatra after her father Frank Sinatra passed on the opportunity. British singer Julie Rogers recorded an alternative song for the titles, but this was not used.

The henchman that Bond fights in Osato's office was played by Samoan pro-wrestler "The High Chief" Peter Fanene Maivia, grandfather of "The Rock" Dwayne Johnson.

The volcano set cost almost as much as Dr. No’s entire budget.

Out of simple courtesy on Bond's part, this is the only movie in which he accepts a Martini that is stirred, not shaken. This is an intentional joke by the producers, not a mistake by either of the actors.

A change of Bond actors, and we'll discuss it in "On Her Majesty's Secret Service"


Send in your feedback to TheRewatchPodcast@gmail.com

Posted by The Rewatch Podcast at 4:53 PM