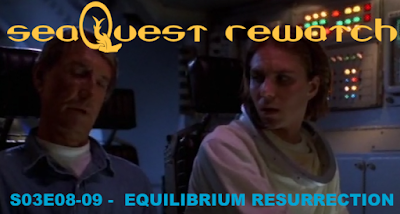 In this weeks episode of The SeaQuest Rewatch, Cory and Tom fix a global mistake as they discuss season 3 episodes 8 & 9, "Equilibrium" and "Resurrection."

The SeaQuest discovers a region of the sea that became infected with a bacteria that was created during one of the vessel’s past missions when Bridger was captain. Lucas easily comes up with a solution to the problem but things get complicated when Bridger shows up with his own small contingent of ships asking them to trust him and let the bacteria die out naturally rather than possibly compound the problem by introducing new bio agents into the ecosystem. McGath sides with Lucas and instructs Hudson to move ahead with his solution, while Bridger stands firm and warns them that he won’t let them go through with it.


Bridger’s ships create a blockade but the SeaQuest is easily able to disable all of them save for Bridger’s own ship. Bridger, knowing the SeaQuest like the back of his hand, manages to play a game of chicken with the vessel while subtly taking over one of the ship’s WSKRS to disable its propulsion systems.

The delay is only momentary and the SeaQuest disables Bridger’s ship and moves ahead to release Lucas’s enzyme into the bacteria infected waters. All seems well as the water toxicity levels begin to return to normal, however, the seaquest begins the experience hull breaches shortly thereafter, and upon further study they realize that the enzyme caused the bacteria to mutate further and it has begun to infect the ship’s bioskin. Furthermore the water leaking in begins to infect the crew members as well, resulting in an infection that threatens to consume the surrounding land and its people as well. Hudson makes the call that the needs of the many outweigh the needs of the few and tells McGath to ready a nuclear missile in order to eradicate the area and destroy the infection.

Meanwhile, Bridger has taken a vessel of his own to try and find some other solution to the new problem. Lucas rendezvous with him and Bridger shows him a strain of algae that is somehow resistant to the bacteria. They rush back to the Seaquest to prepare a new enzyme to rid the area of the bacteria, however McGath has prematurely launched the missile, and due to all of SeaQuest's pilots out of commission due to infection, Hudson takes a ship to try and intercept it, eventually managing to remove the warhead, and saving the crew.

While Ford and an infection-free Henderson admit their love for each other, Bridger tells Lucas that while the bacteria would have burnt itself up eventually, it turns out it would have taken longer than he initially thought and that Lucas’s research was correct and the proper course of action.

In this episode, Hudson mentions an outbreak and references the “Caracas Hantavirus.” Caracas is the capital of Venezuela. Hantavirus infects rodents but doesn’t cause disease, and can infect humans through contact with rodent urine, saliva and feces causing hantavirus hemorrhagic fever with renal syndrome (HFRS), or hantavirus pulmonary syndrome (HPS).
https://en.wikipedia.org/wiki/Orthohantavirus
https://en.wikipedia.org/wiki/Caracas

Bridger's shuttle is classified as a "DS9 shuttle", a reference to Star Trek: Deep Space Nine. "Equilibrium" was also the name of an episode in the third season of Deep Space Nine.

The Seaquest finds itself playing host to former eco-terrorist Max Scully, now fully pardoned from his crimes and currently in charge of an ecologically pure, self sustaining colony he created that could possibly be a template for all future colonies. While their shuttle back to the SeaQuest is attacked, it is quickly captured by SeaQuest herself with the culprit behind the attack revealed as Elaine Morse, Hudson's two time fiancee who has since quit the UEO and is now working freelance as a bounty Hunter with intentions of bringing in Scully to the Japanese government who did not pardon him for his crimes a decade ago. Hudson makes sure that Elaine is sent away and orders Lucas to spend some time on Scully’s colony to see if the former criminal is really worthy of his pardon or if he is still the fanatic he once was.


While the Seaquest is called away to investigate a radiation leak at a nuclear waste facility, Lucas learns all about the colony before seeing Scully being kidnapped by Elaine Morse. Lucas gets the jump on her and saves him, as Scully informs Hudson of Elaine’s actions, resulting in Hudson coming back to the colony in a shuttle to formally arrest her while the SeaQuest continues its investigation.

Elsewhere aboard the ship, newly commissioned officer Piccolo is obeying his order to clear out Brody’s quarters and personal effects, eventually learning Brody had a son that no one aboard knew about.

Scully orders his men to start taking over the SeaQuest remotely, using codes that Scully obtained earlier on his visit to the ship, and they divert all power to the lasers and begin firing at the nuclear waste facility. Unfortunately diverting all the power results in life support being cut down to the minimum causing all aboard to pass out from lack of oxygen, as well as causing the ship’s core to begin to overheat, which could cause the SeaQuest to blow itself up before finishing what Scully wants it to do, which is to destroy the nuclear waste facility and turn it into a nuclear bomb that will destroy all life on earth save for his colony. Through a ruse he manages to get Lucas to save the core from exploding with Dagwood’s assistance and then proceeds to resume firing at the facility.

Elsewhere, Elaine has convinced Hudson that something isn’t right with the radiation leak and Scully and they return to the colony. They’re immediately confronted by Scully who reveals his plan. As Scully monologues, Lucas tries to get a rise out of him, distracting him just enough that Elaine and Hudson begin taking out his men, joined by Lucas as Scully is arrested, as Lucas wonders if Scully’s legacy will be his crimes or his colony.

Jim O’Rear is an uncredited bridge crew member. Like most of the other uncredited bridge crew members he has many uncredited roles and bit parts. He is a director and writer, as well as an actor. He went on to write a large amount of horror movies that he directed and starred in, with titles such as Scream Farm and Night Blade. He’s also worked with some of the same people over and over again in similar type movies. He is also a frequent star of the series Thong Girl, playing Vish’ss, Igor and Georgie. 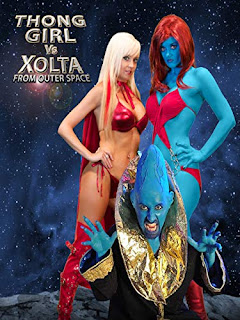 Posted by The Rewatch Podcast at 5:08 PM