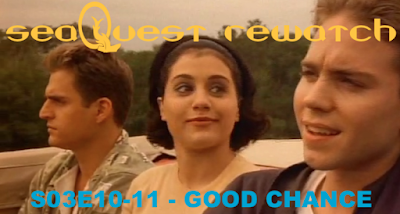 In this weeks episode of The SeaQuest Rewatch, Cory and Tom infiltrate the past as they discuss season 3 episodes 10 & 11, "Good Soldiers" and "Second Chance."

Bridger returns to the SeaQuest to take command in order to retrieve some sensitive information from an abandoned UEO lab that is now under Macronesian control. Bridger takes a shuttle with Lucas, Ford, and Dagwood into the base and as they begin searching, its revealed that Ford was stationed here as an ensign and witnessed the work that was being done here: work that was basically torturing GELFs in order to understand their physiology better and eventually create a more perfect soldier that could recover from any damage done to their body.


Meanwhile, the SeaQuest is doing its best to avoid detection by Macronesian forces but ends up having to use Darwin to destroy some of their sensor drones as well as inadvertently destroying a Macronesian scout ship which was sent to investigate the destroyed drones.
Back in the base, Dagwood has begun to experience visions of the horrors committed in the abuse and Bridger reveals he was a part of the project at one time. Dagwood begins lashing out at Lucas, remembering his Gelf friend Rachel who warned him of the dangers of the monotones. Dagwood’s pain does help him find the crystals but the group is discovered by Macronesian forces who immediately open fire. As they try to retreat, Dagwood refuses to go, wanting to remain behind and die as his fellow GELFs did, but after Ford decides to stay with Dagwood and refusing to let him die alone, he changes his mind and agrees to leave, reasoning that if they die here, no one will remember their story and with that they escape as the the charges they left behind go off, destroying the base.


Back on board the SeaQuest, Bridger gives Dagwood the info crystal leaving him with the decision on what to do with it. After watching the contents involving a GELF named Matthew who believes the doctor that experimented in him to be his friend, Dagwood destroys the crystal while Ford goes to the visit the doctor involved in the project to let him know that he regrets not stopping his experiments and will never be afraid of stepping up again.

James Mathers played Dr. Veracheck. He’s had various bit roles here and there, his first role being the lead in his own written project, Dr. Jekyll’s Dungeon of Death. He also appeared in a 2007 movie called SpaceDisco One.


Matthew was played by Steve Mastro Jr. Just five credits in IMDb, the most notable of which is his role in the movie Knots, in which he plays “party ass grabber.”

Roy Scheider: A Film Biography states that originally this episode did not include Bridger. That was a later addition.

As the Seaquest powers up their reactor core after some repairs, an anomaly causes a mini black hole to appear inside which ends up tossing the SeaQuest back into 1962 at the time of the Cuban Missile Crisis. The crew discovers that somehow instead of peace winning out during this time, an actual nuclear war somehow occured, destroying all life except for one navy officer, Commander Michael VanCamp, whom SeaQuest manages to rescue from his ship but soon succumbs to radiation poisoning and dies.


While Hudson and crew theorize about how things went wrong to cause the war to happen, Lucas and Henderson come up with a plan to recreate the portal and go back in time further to prevent the destruction of the world.
After making the time jump, Ford, Lucas, Henderson and Piccolo go ashore to try and find information about the US ship deployments in order to figure out which ship is going to start the war. They end up going to VanCamp's and using the keys Piccolo took from the future, they steal the family's clothes to fit in, but are seen by VanCamp's daughter Christine who they decide to take with them lest she tells someone about their arrival.


As Ford and company find a spot to make camp, some of Christine's friends arrive, having seen her with this new group, and begin a fight in an attempt to rescue her. Despite stunning the ruffians, more begin to appear and so the crew runs off but are quickly intercepted by the military, led by Commander VanCamp himself.
Meanwhile, Hudson and the crew back onboard the seaquest monitor the activities of the American and Russian subs. They try and use their lasers to seize up the engines of a Russian freighter, hoping it will leave but instead the attack only draws attention  to the freighter and a US sub begins to approach it.

Back at the navy base, Interrogation begins to determine who the SeaQuest crew actually is, with VanCamp not believing anything they are claiming, despite them showing that they have his daughter’s keys from the future and know about his son’s St Christopher prayer Medallion. It’s not until he receives a call from his wife telling him she just purchased a St. Christopher Medallion for their son that he begins to see the truth. Checking with his daughter, they now have an identical set of keys as well, one of which is Catherine’s in present day, and the ones that Piccolo took from the future. Those two things combined with VanCamp testing out the SeaQuest weapons results in him helping them get the information they need.

The seaquest meanwhile has been using its weapons to prevent the US sub’s weapons from reaching the Russians in order to try and avoid a war. Hudson uses the information from VanCamp to get the US sub to stand down, but the sub had launched a buoy that would be a signal to start dropping bombs. With the Russian sub in the way of the buoy, Darwin is sent to stop the buoy from transmitting the war signal, averting the war and saving VanCamp’s future as the SeaQuest heads back through the black hole anomaly and returns home.

VanCamp was played by Terrance Knox. We've seen before in the Lois & Clark episodes “Green, Green Glow of Home” and “Strange Visitor” as Jason Trask.  He’s had various supporting roles since then, but was a lead in Tour of Duty (a Vietnam war series) and Children of the Corn 2.


Christine was played by Brittany Murphy. She’s best known for Clueless, Happy Feet, Girl Interrupted and Neverwas. She was also the voice of LuAnne in King of the Hill. She had a band in the 90's called Blessed With Soul. She died quite suddenly and unexpectedly in 2009, due to pneumonia and anemia, however, her husband died five months later of the same symptoms. Her father is part of an investigation to find out the truth as he believes they were murdered, relating to her and her husband being witnesses in the case of a persecuted former Homeland Security employee named Julia Davis. Indeed ten years after her death, it was discovered she had 10 heavy metals in her body higher than the "high" levels as maintained by the World Health Organization.
Trask was played by Paul Vroom. He acts on and off in bit roles (purse thief, clerk, thug #1). We saw him previously on SeaQuest in the episode “The Sincerest Form of Flattery” as a Lieutenant. He also played Yuri in Thunder in Paradise.


Hank Stone played a marine sergeant. We saw in “Blindsided” as a cellmate. He also played Mongo in the unaired pilot of Bill and Ted's Excellent Adventure. It starred Matt Landers as Ted's father who was in The Flash ‘90 (as Harry Milgrim) and Quantum Leap (the date when Sam was a woman).

Posted by The Rewatch Podcast at 6:04 PM