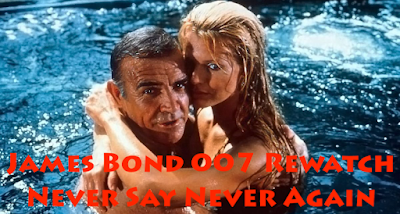 In this episode of the James Bond 007 Rewatch, Cory and Nathan go off-brand as they discuss "Never Say Never Again."

James Horner was both Kershner's and Schwartzman's first choice to compose the score after being impressed with his work on Star Trek II: The Wrath of Khan. Horner, who worked in London for most of the time, wound up unavailable according to Kershner, though Schwartzman later claimed Sean Connery vetoed the American. Frequent Bond composer John Barry was invited, but declined out of loyalty to Eon. The music for Never Say Never Again was written by Michel Legrand, who composed a score similar to his work as a jazz pianist. The score has been criticised as "anachronistic and misjudged", "bizarrely intermittent" and "the most disappointing feature of the film". Legrand also wrote the main theme "Never Say Never Again", which featured lyrics by Alan and Marilyn Bergman — who had also worked with Legrand in the Academy Award-winning song, "The Windmills of Your Mind"—and was performed by Lani Hall after Bonnie Tyler, who disliked the song, had reluctantly declined.
Phyllis Hyman also recorded a potential theme song, written by Stephen Forsyth and Jim Ryan, but the song—an unsolicited submission—was passed over given Legrand's contractual obligations with the music.

Never Say Never Again had its origins in the early 1960s, following the controversy over the 1961 Thunderball novel. Fleming had worked with independent producer Kevin McClory and scriptwriter Jack Whittingham on a script for a potential Bond film, to be called Longitude 78 West, which was subsequently abandoned because of the costs involved. Fleming, "always reluctant to let a good idea lie idle", turned this into the novel Thunderball, for which he did not credit either McClory or Whittingham; McClory then took Fleming to the High Court in London for breach of copyright and the matter was settled in 1963

After Eon Productions started producing the Bond films, it subsequently made a deal with McClory, who would produce Thunderball, and then not make any further version of the novel for a period of ten years following the release of the Eon-produced version in 1965.

In the mid-1970s McClory again started working on a project to bring a Thunderball adaptation to production and, with the working title Warhead, he brought writer Len Deighton together with Sean Connery to work on a script. The script ran into difficulties after accusations from Eon Productions that the project had gone beyond copyright restrictions, which confined McClory to a film based on the Thunderball novel only, and once again the project was deferred.

The film underwent one final change in title: after Connery had finished filming Diamonds Are Forever he had pledged that he would "never" play Bond again. Connery's wife, Micheline, suggested the title Never Say Never Again, referring to her husband's vow and the producers acknowledged her contribution by listing on the end credits "Title "Never Say Never Again" by: Micheline Connery". A final attempt by Fleming's trustees to block the film was made in the High Court in London in the spring of 1983, but this was thrown out by the court and Never Say Never Again was permitted to proceed.

Reportedly, Francis Ford Coppola made script contributions to this movie. Producer Jack Schwartzman was the husband of The Godfather (1972) star Talia Shire. This movie's credits state that Shire acted as a consultant to the producer. She is also Francis Ford Coppola's sister.

George Lazenby was considered by executive producer Kevin McClory to play Bond, but was dropped from consideration when Sir Sean Connery confirmed he wanted the role.

Sean Connery was 52 at the time of filming, so the writers decided to make James Bond a retired secret agent. However, he was three years younger than Roger Moore when he played the still-serving Bond in Octopussy (1983).

Sean Connery was given a lot of creative input into this movie, which was one of the reasons he decided to do it. One area he wanted to focus on was casting, as he felt the EON Productions Bond movies were lacking in prominent acting talent. Connery approved the casting of Klaus Maria Brandauer, Max von Sydow, Edward Fox, Kim Basinger, Barbara Carrera, and Alec McCowen.

At the end, Bond winks at the camera. The only other Bond movies in which 007 breaks the "fourth wall" are Casino Royale (1967), which was a deliberate spoof, and On Her Majesty's Secret Service (1969), where the character was perhaps talking to himself, in the opening sequence.

The closing credits include the line "Thanks A.K." That refers to Adnan Khashoggi, the Saudi arms dealer who allowed them to film aboard his 282-foot yacht, the "Nabila". He later sold the yacht to Donald Trump, who renamed it the "Trump Princess". It's currently owned by Prince Alwaleed bin Talal bin Abdulaziz of Saudi Arabia.

We're finishing the Roger Moore run as Bond, we'll be discussing "A View to a Kill."

Posted by The Rewatch Podcast at 6:58 PM