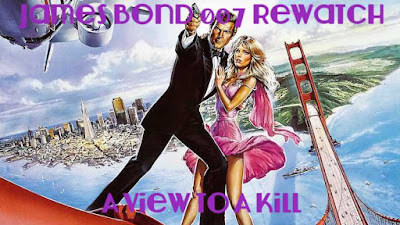 In this episode of the James Bond 007 Rewatch, Cory and Nathan watch a tech giant crumble as they discuss "A View to a Kill."


The Music of A View to a Kill:

The soundtrack was composed by John Barry and published by EMI/Capitol. The theme song, "A View to a Kill", was written by Barry and Duran Duran, and performed by the band. "May Day Jumps" is the only track that uses the "James Bond Theme".


Duran Duran was chosen to do the song after bassist John Taylor, a lifelong Bond fan, approached producer Cubby Broccoli at a party, and somewhat drunkenly asked "When are you going to get someone decent to do one of your theme songs?"

At the end of Octopussy during the "James Bond Will Return" sequence, it listed the next film as "From a View to a Kill", the name of the original short story; however, the title was later changed.


On 27 June 1984, several leftover canisters of petrol used during filming of Ridley Scott's Legend caused Pinewood Studios' 007 Stage to burn to the ground. The stage was rebuilt, and reopened in January 1985 (renamed as Albert R. Broccoli's 007 Stage) for filming of A View to a Kill.

One of the most common criticisms was that Roger Moore was 57 at the time of filming â€“ and had visibly aged in the two years that had passed since Octopussy. The Washington Post critic said "Moore isn't just long in the tooth”he's got tusks, and what looks like an eye job has given him the pie-eyed blankness of a zombie.

Sir Roger Moore said that he decided to end his run as James Bond, when he realized that Tanya Roberts' mother was younger than he was. However, Producer Albert R. Broccoli said he wanted a younger actor for the next movie, "The Living Daylights (1987)," and would not have kept Moore as Bond anyway. Broccoli felt that retaining Moore, who was fifty-seven, for this movie had been a mistake. Contrary to what some sources have said, Moore was never offered another Bond movie after this one.

Early publicity for the film in 1984 included an announcement that David Bowie would play Zorin. He later decided to turn down the role, saying, "I didn't want to spend five months watching my stunt double fall off cliffs." The role of Max Zorin was offered to Rutger Hauer and Sting, and finally to Christopher Walken.

The original script had Barbara Bach reprising her role as Major Anya Amasova from 1977s The Spy Who Loved Me. However Bach declined the role and so an entirely new character - Pola Ivanova - was created, played by Fiona Fullerton.

Dolph Lundgren has a brief appearance as one of General Gogol's KGB agents. Lundgren, who was dating Grace Jones at the time, was visiting her on set when one day an extra was missing so the director John Glen then asked him if he wanted to get a shot at it. Lundgren appears during the confrontation between Gogol and Zorin at the racetrack, standing several steps below Gogol.

When a company with a name similar to Zorin (the Zoran Corporation) was discovered in the United States, a disclaimer was added to the start of the film affirming that Zorin was not related to any real-life company.

This was Lois Maxwell's final appearance as Miss Moneypenny. Apparently, after she was told that she would be retiring from the role, she thought that she could become M as a promotion. However, at the time, Producer Albert R. Broccoli believed that audiences would not accept James Bond being given orders by a woman. M did become a woman when Dame Judi Dench took on the role in GoldenEye (1995).

The final scenes for Lois Maxwell and Sir Roger Moore each make a reference to their end with the franchise. Maxwell's last scene as Moneypenny shows her in tears, while Moore's last scene as Bond has him, quite literally, throwing in the towel.

Posted by The Rewatch Podcast at 5:36 PM