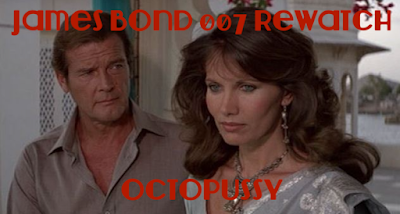 In this episode of the James Bond 007 Rewatch, Cory and Nathan aren't clowning around as they discuss "Octopussy."


The Music of Octopussy:

After being absent in For Your Eyes Only due to tax problems, John Barry returned to do his ninth Bond score. Barry made frequent references to the James Bond Theme to reinforce Octopussy as the official Bond film, given that motif could not be featured in Never Say Never Again, and opted to include only subtle references to the music of India, avoiding instruments such as the sitar for feeling that authentic music "didn't work dramatically". He also wrote the opening theme "All Time High" with lyricist Tim Rice. "All Time High", sung by Rita Coolidge, is one of seven musical themes in the James Bond series whose song titles do not refer to the film's title. "All Time High" spent four weeks at number one on the United States' Adult Contemporary singles chart and reached number 36 on the Billboard Hot 100

Thirteenth James Bond movie in the Eon Productions franchise, and the sixth to star Sir Roger Moore as Bond. With this movie, Moore equalled the number of Bond movies that Sir Sean Connery had made in the official franchise.

Following For Your Eyes Only, Roger Moore had expressed a desire to retire from the role of James Bond. His original contract had been for three films, which was fulfilled with The Spy Who Loved Me. Subsequent films were negotiated on a film-by-film basis. Given his reluctance to return for Octopussy, the producers engaged in a semi-public quest for the next Bond, with Timothy Dalton being suggested and tests being filmed with both Michael Billington and James Brolin. However, when the rival Bond production Never Say Never Again was announced, the producers re-contracted Moore in the belief that an established actor in the role would fare better against former Bond, Sean Connery.

The pre-title sequence has a scene where Bond flies a nimble aircraft through an open hangar. It was performed by Hollywood stunt pilot and aerial coordinator J.W. "Corkey" Fornof.

Last Bond movie to reveal the name of the next Bond movie during the end credits, namely "From A View To A Kill," which later dropped the "from" out of the title.

A video game called "James Bond as seen in Octopussy" was developed by Capcom and Parker Brothers for this movie in 1984. It was designed for the Atari 2600, Atari 5200, Commodore 64, and ColecoVision platforms, but was never released. If it had been, it would have been the first James Bond video game with an associated title with that of a Bond movie. This didn't happen until A View to a Kill (1985).

Rumors abound prior to this movie's release, that Sir Sean Connery was going to appear in this movie alongside Sir Roger Moore, possibly as the villain. There have been similar claims on and off ever since.

Octopussy is the first film to feature Robert Brown as M, following the death of Bernard Lee in 1981. Brown was recommended by Moore, who had known him since both worked in the series Ivanhoe.

Cameo
Ingrid Pitt: The former Hammer horror scream Queen, as the uncredited voice of a Galley Mistress.
Michael G. Wilson: A passenger on the riverboat and a Soviet Security Council Member.

Posted by The Rewatch Podcast at 5:10 PM