RW338 - James Bond Rewatch - For Your Eyes Only 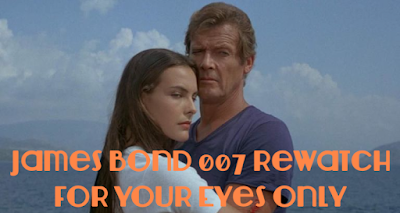 In this episode of the James Bond 007 Rewatch, Cory and Nathan walk a treacherous road as they discuss "For Your Eyes Only."


The Music of For Your Eyes Only:


According to the CD soundtrack sleeve notes, composer John Barry could not compose the score for this movie as he allegedly could not return to the U.K. for taxation purposes

The title song, written by Conti and Michael Leeson, was sung by Sheena Easton, who holds the distinction of being the first title song artist to appear on screen in a Bond film, as designer Maurice Binder liked Easton's appearance and decided to add her to the opening credits. The producers of the film wanted Blondie to perform the title song: the band wrote a song titled "For Your Eyes Only", but decided to decline the offer when they discovered the producers wanted a recording of Conti's song instead. Blondie's song can be found on their 1982 album, The Hunter.

After the science fiction-focused Moonraker, the producers wanted a return to the style of the early Bond films and the works of 007 creator Fleming. For Your Eyes Only followed a grittier, more realistic approach and a narrative theme of revenge and its consequences. Filming locations included Greece, Italy and England, while underwater footage was shot in The Bahamas.

For Your Eyes Only marked a change in the make up of the production crew: John Glen was promoted from his duties as a film editor to director, a position he would occupy for four subsequent films. The transition in directors resulted in a harder-edged directorial style, with less emphasis on gadgetry and large action sequences in huge arenas. Emphasis was placed on tension, plot and character in addition to a return to Bond's more serious roots.

This movie saved United Artists from financial ruin. At the time of this movie's release, the studio was still reeling from Michael Cimino's Heaven's Gate (1980), a notorious forty million dollar bomb, that was about to force United Artists to file for bankruptcy. When this movie took in a worldwide gross of one hundred ninety-five million dollars, the studio was saved, and afterwards turned its focus toward blockbusters and less on personal movies.

A line of dialogue had to be cut from the opening helicopter sequence for legal reasons. The bald man could not be called "Blofeld", as Kevin McClory had won a court case several years previous, and owned the rights to the use of "S.P.E.C.T.R.E.", and "Ernst Stavro Blofeld". Unofficially disposing of Blofeld so early in this movie was Albert R. Broccoli's way of telling McClory that the success of 007 did not depend on him, and he got rid of Blofeld (supposedly) once and for all.

Bernard Lee died of cancer on 16 January 1981, after filming began on For Your Eyes Only, but before he could film his scenes as M, the head of MI6, as he had done in the previous eleven films of the series. Out of respect, no new actor was hired to assume the role as Broccoli refused to have the character recast and, instead, the script was re-written so that the character is said to be on leave

Director John Glen stated that there had been some discussion of bringing back the Jaws character for a third time, but eventually, the idea was rejected, as they felt he did not fit the movie's more serious tone.

Topol suggested to Producer Albert R. Broccoli that he invite former co-Producer Harry Saltzman to the premiere, and he did, marking the first reunion between the two men since their break up after The Man with the Golden Gun.

To enter the identigraph booth, Q enters a five digit code. Those five digits were the first five notes to the chorus of "Nobody Does It Better", the theme to The Spy Who Loved Me (1977). James Bond responds by entering the final two notes.

We inch ever closer to the end of Moore's run when we discuss "Octopussy."

Posted by The Rewatch Podcast at 6:02 PM