RW335 - James Bond Rewatch - The Man with the Golden Gun 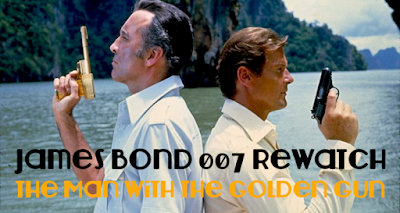 In this episode of the James Bond 007 Rewatch, Cory and Nathan go head to head as they discuss "The Man with the Golden Gun."

The Music of The Man with the Golden Gun:

Albert R. Broccoli and Harry Saltzman intended to follow You Only Live Twice with The Man with the Golden Gun, inviting Roger Moore to the Bond role. However, filming was planned in Cambodia, and the Samlaut Uprising made filming impractical, leading to the production being cancelled.

Broccoli and Saltzman then decided to start production on The Man with the Golden Gun after Live and Let Die. This was the final Bond film to be co-produced by Saltzman as his partnership with Broccoli was dissolved after the film's release. Saltzman sold his 50% stake in Eon Productions's parent company, Danjaq, LLC, to United Artists to alleviate his financial problems.

The novel is mostly set in Jamaica. After considering Beirut, where part of the film is set, Iran, where the location scouting was done but eventually discarded because of the Yom Kippur War, and the Hạ Long Bay in Vietnam, the production team chose Thailand as a primary location

While Live and Let Die had borrowed heavily from the blaxploitation genre, The Man with the Golden Gun borrowed from the martial arts genre that was popular in the 1970s through films such as Fist of Fury (1972) and Enter the Dragon (1973).

Originally, the role of Scaramanga was offered to Jack Palance, but he turned the opportunity down. Christopher Lee, who was eventually chosen to portray Scaramanga, was Ian Fleming's step-cousin and Fleming had suggested Lee for the role of Dr. No.

Two Swedish models were cast as the Bond girls, Britt Ekland and Maud Adams. Ekland had been interested in playing a Bond girl since she had seen Dr. No, and contacted the producers about the main role of Mary Goodnight.

Three Golden Gun props were made; a solid piece, one that could be fired with a cap and one that could be assembled and disassembled. On 10 October 2008, it was discovered that one of the golden guns used in the film, which is estimated to be worth around £80,000, was missing (suspected stolen) from Elstree Props.

The theme tune to The Man with the Golden Gun, released in 1974, was performed by Scottish singer Lulu and composed by John Barry. Tony Bramwell, who worked for Harry Saltzman's music publishing company Hilary Music, wanted Elton John or Cat Stevens to sing the title song. However, by this time the producers were taking turns producing the films; Albert Broccoli—whose turn it was to produce—rejected Bramwell's suggestions. The lyrics to the Lulu song were written by Don Black and have been described variously as "ludicrous", "inane" and "one long stream of smut", because of their sexual innuendo. Bramwell subsequently dismissed the Barry-Lulu tune as "mundane".

Alice Cooper wrote a song titled "Man with the Golden Gun" to be used by the producers of the film, but they opted for Lulu's song instead. Cooper released his song in his album Muscle of Love.

Barry had only three weeks to score The Man with the Golden Gun and the theme tune and score are generally considered by critics to be among the weakest of Barry's contributions to the series, an opinion shared by Barry himself.

We ask the burning question, who is "The Spy Who Loved Me"?

Posted by The Rewatch Podcast at 11:35 PM