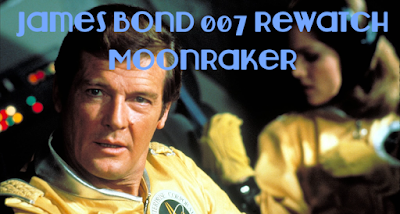 In this episode of the James Bond 007 Rewatch, Cory and Nathan jump the sci-fi trend as they discuss "Moonraker."


The Music of Moonraker:

Moonraker was the third of three Bond films for which the theme song was performed by Shirley Bassey (following Goldfinger and Diamonds Are Forever). Frank Sinatra was originally considered for the vocals, and Kate Bush was asked, but she declined. Johnny Mathis was approached and offered the opportunity. However, Mathis—despite having started recording with Barry—was unable to complete the project, leaving producers to offer the song to Bassey just weeks before the premiere date in England. Bassey made the recordings with very short notice and as a result, she never regarded the song 'as her own' as she had never had the chance to perform it in full or promote it first

Moonraker was noted for its high production cost of $34 million, more than twice as much as The Spy Who Loved Me (1977), and it received mixed reviews. However, the film's visuals were praised, with Derek Meddings being nominated for the Academy Award for Best Visual Effects, and it eventually became the highest-grossing film of the series at the time with $210,300,000 worldwide, a record that stood until 1995's GoldenEye.

The end credits for the previous Bond film, The Spy Who Loved Me, said, "James Bond will return in For Your Eyes Only"; however, the producers chose the novel Moonraker as the basis for the next film, following the box office success of the 1977 space-themed film Star Wars. For Your Eyes Only was subsequently delayed and ended up following Moonraker in 1981.

The screenplay of Moonraker differed so much from Ian Fleming's novel that Eon Productions authorised the film's screenwriter, Christopher Wood to write a novelisation, his second. It was named James Bond and Moonraker to avoid confusion with Fleming's original novel Moonraker. It was published in 1979, with the film's release.

Production began on 14 August 1978. The main shooting was switched from the usual 007 Stage at the Pinewood Studios to France, due to high taxation in England at the time. Only the cable car interiors and space battle exteriors were filmed at Pinewood. The massive sets designed by Ken Adam were the largest ever constructed in France and required more than 222,000 man-hours to construct.

Much of the film was shot in the cities of London, Paris, Venice, Palmdale, California, Port St. Lucie, Florida, and Rio de Janeiro. The production team decided on Rio de Janeiro relatively early on, a city that Cubby Broccoli had visited on holiday, and a team was sent there in early 1978 to capture initial footage from the Carnival, which featured in the film.

The Jaws character, played by Richard Kiel, makes a return, although in Moonraker the role is played more for comedic effect than in The Spy Who Loved Me. Jaws was intended to be a villain against Bond to the bitter end, but director Lewis Gilbert stated on the DVD documentary that he received so much fan mail from small children saying "Why can't Jaws be a goodie not a baddie", that as a result he was persuaded to gradually transform Jaws into Bond's ally by the end of the film.

Bernard Lee's final appearance as M. The actor died when For Your Eyes Only (1981) was in pre-production.

It must be top secret because it's "For Your Eyes Only"

Posted by The Rewatch Podcast at 5:50 PM