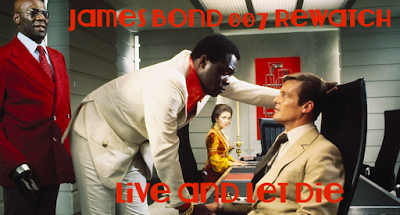 In this episode of the James Bond 007 Rewatch, Cory and Nathan see a long road in the cards as they discuss "Live and Let Die."

The Music of Live and Let Die:

While filming Diamonds Are Forever, Live and Let Die was chosen as the next Ian Fleming novel to be adapted because screenwriter Tom Mankiewicz thought it would be daring to use black villains, as the Black Panthers and other racial movements were active at this time.

Guy Hamilton was again chosen to direct, and since he was a jazz fan, Mankiewicz suggested he film in New Orleans. Hamilton did not want to use Mardi Gras since Thunderball featured Junkanoo, a similar festivity, so after more discussions with the writer and location scouting with helicopters, he decided to use two well-known features of the city, the jazz funerals and the canals
Broccoli and Saltzman tried to convince Sean Connery to return as James Bond, but he declined. At the same time United Artists approached actors Adam West and Burt Reynolds. Reynolds told the studios that Bond should be played by a Briton and turned the offer down.

Among the actors to test for the part of Bond were Julian Glover, John Gavin, Jeremy Brett, Simon Oates, John Ronane, and William Gaunt. The main frontrunner for the role was Michael Billington. United Artists was still pushing to cast an American to play Bond, but producer Albert R. Broccoli insisted that the part should be played by a British actor and put forward Roger Moore
Roger Moore was 45 when he made his debut as 007, making him the oldest actor to portray the iconic character. The youngest was George Lazenby, who was 29 in On Her Majesty's Secret Service (1969).

The producers made a conscious decision to make Roger Moore's Bond significantly different from Sean Connery's. In this film, Bond never orders a vodka martini, but drinks bourbon whiskey, "neat" (no ice) instead. The mission briefing occurs in his flat, not the office. Bond does not wear a hat. He smokes cigars instead of cigarettes.

Mankiewicz had thought of turning Solitaire into a black woman, with Diana Ross as his primary choice. However, Broccoli and Saltzman decided to stick to Fleming's description of a white woman and, after thinking of Catherine Deneuve, Jane Seymour, who was in the TV series The Onedin Line, was cast for the role.

Yaphet Kotto was cast while doing another movie for United Artists, Across 110th Street. Kotto reported one of the things he liked in the role was Kananga's interest in the occult. According to Roger Moore, Yaphet Kotto was difficult to work with, but Kotto denies this. Kotto maintains that though he may have been quiet, he was courteous to everyone in the movie.

John Barry, who had worked on the previous five themes and orchestrated the "James Bond Theme" was unavailable during production. Broccoli and Saltzman instead asked Paul McCartney to write the theme song. Saltzman, mindful of his decision not to produce "A Hard Day's Night" was especially eager to work with McCartney. Since McCartney's salary was high and another composer could not be hired with the remainder of the music budget, George Martin, who had been McCartney's producer while with The Beatles, was chosen to write the score for the film

"Live and Let Die", written by McCartney along with his wife Linda and performed by their group Wings, was the first true rock and roll song used to open a Bond film, and became a major success in the United Kingdom (where it reached number nine in the charts) and the US (where it reached number 2, for three weeks). It was nominated for an Academy Award, but lost

Desmond Llewelyn didn't appear in this movie as Q, because Llewellyn was appearing on the television show Follyfoot (1971).

Bond finds himself fighting an assassin, know as "The Man with the Golden Gun."

Posted by The Rewatch Podcast at 10:09 PM