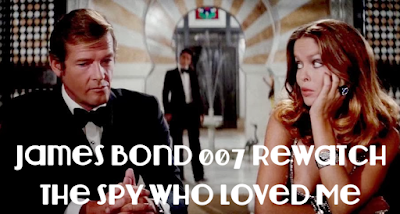 In this episode of the James Bond 007 Rewatch, Cory and Nathan find themselves in deep water as they discuss "The Spy Who Loved Me."


The Music of The Spy Who Loved Me:

The Spy Who Loved Me in many ways was a pivotal film for the Bond franchise, and was plagued since its conception by many problems. The first was the departure of Bond producer Harry Saltzman, who was forced to sell his half of the Bond film franchise in 1975 for £20 million. Saltzman had branched out into several other ventures of dubious promise and consequently was struggling through personal financial reversals unrelated to Bond. This was exacerbated by the twin personal tragedies of his wife's terminal cancer and many of the symptoms of clinical depression in himself

Another troubling aspect of the production was the difficulty in obtaining a director. The producers approached Steven Spielberg, who was in post-production for Jaws, but ultimately decided against him. The first director attached to the film was Guy Hamilton, who directed the previous three Bond films as well as Goldfinger, but he left after being offered the opportunity to direct the 1978 film Superman, although Richard Donner took over the project. Eon Productions later turned to Lewis Gilbert, who had directed the earlier Bond film You Only Live Twice.

The eyesight of Cinematographer Claude Renoir was failing at the time of this movie, and he could not see to the end of the massive supertanker set. As a result, he could not supervise the lighting. Ken Adam turned to his friend Stanley Kubrick, who, under the condition of complete secrecy, supervised the lighting. He suggested the use of floodlights.

Kubrick's stepdaughter (Katharina Kubrick) designed the dentures that Richard Kiel (Jaws) wore in this movie and Moonraker (1979). The metal teeth are on display at the Spy Museum in Washington, D.C..

The crew was upset because of the horrible food in Egypt, so Producer Albert R. Broccoli had a refrigerated truck with food brought from England. However, someone forgot to turn on the freezer, so all the food was inedible upon arrival. Broccoli jumped into action, taking a Jeep and some crew into town to grab items like tomatoes and pots and pans. Pasta was flown in from Cairo. Well-known as an amateur chef at home, Broccoli cooked up a feast for the cast and crew, served by him and Sir Roger Moore.

The initial villain of the film was Ernst Stavro Blofeld; however Kevin McClory, who owned the film rights to Thunderball obtained an injunction barring Eon Productions from using the character of Blofeld, or his international criminal organisation, SPECTRE. The villain was later changed from Blofeld to Stromberg.

Tom Mankiewicz claims that Catherine Deneuve wanted to play the female lead and was willing to cut her normal rate from $400,000 per picture to $250,000, but Broccoli would not pay above $80,000.

The theme song "Nobody Does It Better" was composed by Marvin Hamlisch, written by Carole Bayer Sager, and performed by Carly Simon. It was the first theme song in the series to be titled differently from the name of the film, although the title is in the lyrics. It was nominated for the Best Song Oscar but lost to "You Light Up My Life".

The soundtrack to the film was composed by Marvin Hamlisch, who filled in for veteran John Barry, who was unavailable to work in the United Kingdom because of tax reasons. The soundtrack, in comparison to other Bond films of the time, is more disco-oriented and included a new disco rendition of the "James Bond Theme" titled "Bond 77"

The Lotus Esprit, also known as Wet Nellie, capable of transforming from car to submarine in the film, was purchased for £616,000 at a London auction in October 2013 by Elon Musk, who plans to rebuild the vehicle and attempt to make the fictional dual-purpose car be an actual dual-purpose car (underwater and on land).


Bond in space? That's right, next week we rewatch "Moonraker."

Posted by The Rewatch Podcast at 7:09 PM