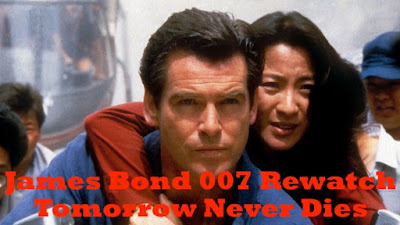 In this episode of the James Bond 007 Rewatch, Cory and Nathan hit the headlines as they discuss "Tomorrow Never Dies."


The Music of Tomorrow Never Dies:

At first, the theme song was to be written by Arnold himself, with the help of lyricist Don Black and singer-songwriter David McAlmont, who recorded the demo. However, MGM wanted a more popular artist, and invited various singers to write songs before one was picked through a competitive process. There were around twelve submissions, including songs from Swan Lee, Pulp, Saint Etienne, Marc Almond, and Sheryl Crow. Crow's song was chosen for the main titles.

Prolific composer John Barry was in talks to return to the James Bond films for the first time in a decade but could not reach an agreement over his fee and because the producing team insisted that he not have anything to do with the title song, which had already been assigned to Sheryl Crow. Barbara Broccoli subsequently chose David Arnold to score Tomorrow Never Dies on a recommendation from Barry. David Arnold was equally unhappy about having a song imposed on him. Arnold's solution was to write a new song for the end credits, "Surrender", performed by k.d. lang, which thematically crops up throughout the score.

Following the success of GoldenEye in reviving the Bond series, there was pressure to recreate that success in the film's follow-up production. This pressure came from MGM which, along with its new owner, billionaire Kirk Kerkorian, wanted the film's release to coincide with their public stock offering.

This was the first Bond film to be made after the death of Albert R. Broccoli, who had been involved with the series' production since its beginning; the film is dedicated to his memory.

The producers were unable to persuade Martin Campbell, the director of GoldenEye, to return; his agent said that "Martin just didn't want to do two Bond films in a row." Instead, Roger Spottiswoode was chosen in September 1996. Spottiswoode said he had previously offered to direct a Bond film while Timothy Dalton was still in the leading role.

The title was inspired by the Beatles' song "Tomorrow Never Knows". The eventual title came about by accident: one of the potential titles was Tomorrow Never Lies (referring to the Tomorrow newspaper in the plot) and this was faxed to MGM. But through an error this became Tomorrow Never Dies, a title which MGM found so attractive that they insisted on using it. The title was the first not to have any relation to Fleming's life or work.

Teri Hatcher was three months pregnant when shooting started, although her publicist stated the pregnancy did not affect the production schedule. Hatcher later regretted playing Paris Carver, saying "It's such an artificial kind of character to be playing that you don't get any special satisfaction from it."

The role of Elliot Carver was initially offered to Anthony Hopkins, but he declined in favor of The Mask of Zorro.

Natasha Henstridge was rumoured as cast in the lead Bond Girl role, but eventually, Yeoh was confirmed in that role. Brosnan was impressed, describing her as a "wonderful actress" who was "serious and committed about her work". She reportedly wanted to perform her own stunts, but was prevented because director Spottiswoode ruled it too dangerous and prohibited by insurance restrictions.

Spottiswoode tried to innovate in the action scenes. Since the director felt that after the tank chase in GoldenEye he could not use a bigger vehicle, a scene with Bond and Wai Lin on a BMW motorcycle was created. Another innovation was the remote-controlled car, which had no visible driver, an effect achieved by adapting a BMW 750i to put the steering wheel on the back seat.

The film was also adapted into a third-person shooter PlayStation video game, Tomorrow Never Dies. The game was developed by Black Ops and published by Electronic Arts on 16 November 1999. Game Revolution described it as "really just an empty and shallow game", and IGN said it was "mediocre".

For the fight scene in the bicycle shop, the producers had to call in Jackie Chan's stunt team, because none of the stuntmen wanted to do the scene with Michelle Yeoh, due to her full contact stunt fighting style, which she perfected while she was a member of the Jackie Chan stunt team.

Can we find friend or foe in "The World is Not Enough"?

Posted by The Rewatch Podcast at 4:21 PM