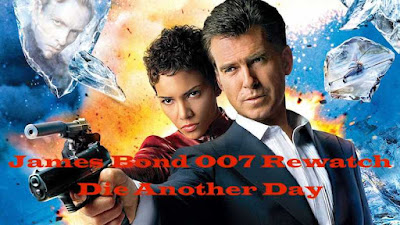 In this episode of the James Bond 007 Rewatch, Cory and Nathan bring out all the guns as they discuss "Die Another Day."


The Music of Die Another Day:

The title song for Die Another Day was co-written and co-produced by Mirwais Ahmadzai and performed by Madonna, who also had a cameo in the film as Verity, a fencing instructor. Critics' opinions of the song were sharply divided—it was nominated for a Golden Globe for Best Original Song and the 2004 Grammy Award for Best Dance Recording, but also for a Golden Raspberry Award for Worst Original Song of 2002 (while Madonna herself won the Golden Raspberry Award for Worst Supporting Actress for her cameo).

In a poll for the Channel 4 programme "James Bond's Greatest Hits", the song was voted 9th out of 22, and also came in as an "overwhelming number one" favourite among those under the age of 24.

The soundtrack was composed by David Arnold and released on Warner Bros. Records. He again made use of electronic rhythm elements in his score, and included two of the new themes created for The World Is Not Enough.

Die Another Day marked the James Bond franchise's 40th anniversary; consequently, the film includes references to each of the preceding films. It was decided to delay production of this movie in order to have a 2002 release date, to coincide with the anniversary and the 50th anniversary of the writing of the first Bond novel (Casino Royale).

Gadgets and other props from every previous Bond film and stored in Eon Productions' archives appear in Q's warehouse in the London Underground. Examples include the jetpack in Thunderball and Rosa Klebb's poison-tipped shoe in From Russia with Love. Q mentions that the watch he issues Bond is "your 20th, I believe", a reference to Die Another Day being the 20th Eon-produced Bond film.

For the first time, the famous gun barrel sequence now includes a bullet zooming by after Bond fires. This idea was suggested by director Lee Tamahori.

Wai Lin, played by Michelle Yeoh in Tomorrow Never Dies (1997), was originally supposed to make her return, aiding James Bond in Hong Kong, but no arrangement could be worked out with her, and she was replaced by Chinese Intelligence Agent Chang.

Speculation arose in 2003 of a spin-off film concentrating on Jinx. It was originally reported that MGM was keen to set up a film series that would be a "winter olympics" alternative to the main series. In the late 1990s, MGM had originally considered developing a spin-off film based on Michelle Yeoh's character, Wai Lin, in 1997's Tomorrow Never Dies.

The book that 007 picks up from the Cuban sleeper, along with a revolver, is "A Field Guide to Birds of the West Indies", written by James Bond. Ian Fleming, an avid birdwatcher, named Bond after the author.

Producers Michael G. Wilson and Barbara Broccoli, and screenwriters Neal Purvis and Robert Wade have admitted that they completely misjudged what the fans wanted from the franchise, and accept the blame for the outlandish tone of this movie.

After the release of this movie, Pierce Brosnan was approached by a man in a Dublin bar who asked to shake his hand. Brosnan complied and then cracked up when the man quipped, "That's the closest my hand will ever get to Halle Berry's arse."

Cory and Nathan will be rewatching The Shining


Head over to our TeePublic store today and buy some merch! Every item sold sees a small return to us to cover our hosting costs and we appreciate every purchase.