RW359 - James Bond Rewatch - The World is Not Enough 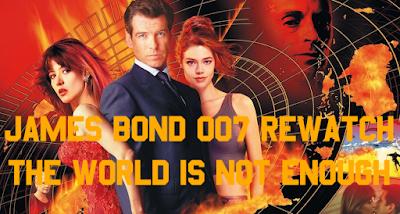 In this episode of the James Bond 007 Rewatch, Cory and Nathan flip the script as they discuss "The World is Not Enough."


The Music of The World is Not Enough:

The soundtrack to The World Is Not Enough is the second Bond soundtrack to be composed by David Arnold. Arnold broke tradition by not ending the film with a reprise of the opening theme or, as with the previous three films, a new song. Originally, Arnold intended to use the song "Only Myself to Blame" at the end of the film; however, Apted discarded this and the song was replaced by a remix of the "James Bond Theme". "Only Myself to Blame" was written by Arnold and Don Black and sung by Scott Walker.

In November 1997, a month prior to the release of Tomorrow Never Dies, Barbara Broccoli watched a news report on Nightline detailing how the world's major oil companies were vying for control of the untapped oil reserves in the Caspian Sea in the wake of the Soviet Union's collapse, and suggested that controlling the only pipeline from the Caspian to the West would be an appropriate motivation for a potential Bond villain.

Joe Dante, and later Peter Jackson, were initially offered the opportunity to direct the film. Barbara Broccoli enjoyed Jackson's Heavenly Creatures, and a screening of The Frighteners was arranged for her. She disliked the latter film, however, and showed no further interest in Jackson.

Roger Spottiswoode was asked to direct, but he turned it down, feeling tired after the chaotic production of Tomorrow Never Dies (1997).

Hoping to find a director capable of eliciting strong performances from women, the producers eventually hired Michael Apted, as his work with Sissy Spacek in Coal Miner's Daughter, Sigourney Weaver in Gorillas in the Mist and Jodie Foster in Nell has earned all three actresses Oscar nominations (with Spacek winning).

The pre-title sequence begins in Bilbao, Spain, featuring the Guggenheim Museum. After the opening scene, the film moves to London, showcasing the SIS Building and the Millennium Dome on the Thames. The sequence lasts for about 14 minutes, the longest pre-title sequence in the Bond series to date.

The scene in which James Bond (Pierce Brosnan) grabs the cables on the Millennium Dome required extraordinarily difficult stunt work. Director Michael Apted intentionally left a shot of one of the stuntmen missing a cable he was attempting to grab in the final cut. Apted included the miscue in order to highlight how difficult the scene had been to film, and as an honor to the stunt performers who worked on the movie.

When the real MI6 learned that this movie would shoot a scene around their Headquarters, they moved to prohibit it, citing a security risk. However, Foreign Secretary Robin Cook, at the urging of Member of Parliament Janet Anderson, moved to overrule them and allow the shoot, stating, "After all Bond has done for Britain, it was the least we could do for Bond."

Denise Richards was attracted to the role of Dr. Christmas Jones, as she found the part to be "brainy", "athletic", and had "depth of character", a change in direction from previous Bond Girls. Audiences did not agree, and often consider Christmas to be the worst Bond Girl ever. This was the first Bond movie to win a Razzie (in the category of Worst Supporting Actress), for the same reason.

Desmond Llewelyn (Q) died in a car accident soon after this movie was released. Llewellyn said just before his death that he was planning to appear in the next Bond movie. The video release was dedicated to Llewelyn, and featured a tribute montage of his appearances in seventeen Bond movies over thirty-six years.


Head over to our TeePublic store today and buy some merch! Every item sold sees a small return to us to cover our hosting costs and we appreciate every purchase.

Posted by The Rewatch Podcast at 4:58 PM