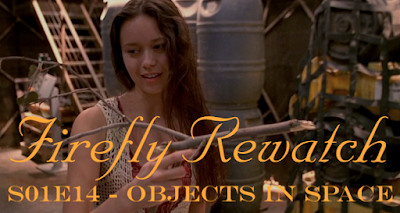 In this weeks episode of The Firefly Rewatch, Cory and Tom become one with the podcast as they discuss episode 14, "Objects in Space."

As River walks through Serenity, she begins picking up people’s inner thoughts, at times in direct contrast to what they are actually saying out loud at that moment. As she makes her way to the cargo hold she picks up a twig from the floor which is covered in leaves, but is suddenly woken by Simon and the crew who are shocked to see her holding a loaded gun. Mal manages to get the gun away safely as River runs off saying it’s crowded.

The crew has a sit down discussion about the problems associated with River but Mal ultimately decides to let it rest till he’s had some time to think about it and they all retire to their quarters for the night, not realizing River had been listening in the whole time.

With the crew down, a bounty hunter named Early manages to break into Serenity, quickly overcoming Mal when he is discovered and locking him and everyone else inside their quarters. Early finds Kaylee working on the engine and under threat of rape, has her submit to being tied up, lest he return and make good on his threat. He manages to also get the jump on Book, knocking him out, before finding Simon and coercing him to search the ship for River.

After finding no trace of River, Early yells a demand out loud that he will kill Simon unless River gives herself up right away. River responds as a disembodied voice, explaining that since the crew didn’t want her there, she melted away and merged with the ship, a revelation that shakes Early. River communicates with Mal and Kaylee to help set off her plan, while telling Zoe to not go out with guns blazing.

The bounty hunter eventually realizes that River actually has just managed to make her way to his ship and is using his communications system to speak to them all. However River tells Early that she is as dangerous as he is and will go with him, so that her shipmates can move on with their lives without having to worry about her issues. As Early turns to leave, Simon takes the moment to attack him but is shot in the leg as a result.

Early starts to leave the ship but is ambushed by Mal outside who knocks him away. As the crew later recovers, chatting about the experience, Serenity flies off in the distance, revealing Early, still alive but floating through space.

It is interesting to note that Nathan Fillion is a descendant of Confederate Lieutenant General Jubal Anderson Early, which may be where the name came from.

Jubal Early was played by Richard Brooks. He’s had a number of roles in shows and movies produced by OWN, UMC and BET, such as The Haves and Have Nots, The Rich and the Ruthless and Being Mary Jane. He also starred in Law and Order as ADA Paul Robinette for 69 episodes, and had a minor role in Teen Wolf as Lemonade.

Dead or Alive is the script for an episode that was never made. It was incorporated into other episodes, including “Jaynestown”, “Shindig”, “Ariel” and “The Message.”

Cory and Tom will be discussing Serenity.