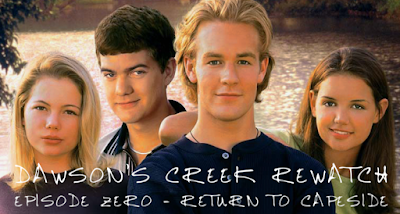 In this weeks episode of The Rewatch Podcast, Cory and Tom introduce you to the new rewatch plans and discuss the main cast of Dawson's Creek.

Dawson Leery - James Van Der Beek: Dawson Leery is an iconic role for Van Der Beek, and the character was also an uncredited cameo in Scary Movie. Van Der Beek credits North Carolina shoots for keeping them honest. Aside from Dawson, his biggest roles are, arguably, Mox in Varsity Blues, Sean in The Rules of Attraction and Diplo in What Would Diplo Do? (A mockumentary style series about a DJ). He also appeared as himself in Jay and Silent Bob Strike Back and Reboot, as well as an exaggerated version of himself in Don’t Tell the B In Apartment 23, starring Kristen Ritter.

He headlined the 1 season show Friends With Better Lives; a comedy centered around six 30-something friends who each think the other has it better. Most recently, he played Prince Humperdink in the Pandemic Princess Bride shorts. Just this year he was in a movie called Bad Hair as a supporting character (the story of a young African American woman trying to make it in the entertainment business and is told to get a weave that later comes to life). He also plays the voice of Boris in Disney’s Vampirina, and had a run as a lead in CSI: Cyber.

Joey Potter - Katie Holmes: She auditioned for Buffy, but was considered too young. Some of her bigger roles are in Jack and Jill with Adam Sandler, Disturbing Behavior with James Marsden and Batman Begins with Christian Bale. She and Joshua Jackson had a Dawson’s cameo in Muppets From Space. She had a run of hit movies like Teaching Mrs. Tingle, Wonder Boys, Phone Booth and Pieces of April. Later, she also appeared in Don’t Be Afraid of the Dark, Mad Money and Miss Meadows; an Elementary School Teacher turned vigilante.

She was in season 3 of Ray Donovan (a fixer for rich people) and appeared in The Kennedys After Camelot (story after the assassination).  Most recently she starred in The Secret: Dare To Dream with Jerry O’Connell. She is also known as the ex-Mrs. Tom Cruise.

Pacey Witter - Joshua Jackson: In his past he starred in The Affair (TV series), the Mighty Ducks series of movies, Cruel Intentions and One Week; a motorcycle ride about a guy trying to find meaning in his life. He starred in the short Pacey-Con for Funny or Die:

He was also in Fringe as a main cast member. Most recently he’s been in a mini series called Little Fires Everywhere, based on the book which follows the intertwined fates of the picture-perfect Richardson family and the enigmatic mother and daughter who upend their lives (co stars Reese Witherspoon, Kerry Washington and Lexi Underwood).

Jen Lindley - Michelle Williams: She was recently in Venom as Anne Weying and will return in the sequel. She also was recently in a mini series about Bob Fosse and Gwen Verdon, famous choreographer and Broadway dancer, respectively. She’s consistently worked over  the years, including Manchester By The Sea, Brokeback Mountain, Shutter Island, The Greatest Showman and she played Marilyn Monroe in My Week With Marilyn.

Mitch Leery - John Wesley Shipp: Of course, we saw him in The Flash ‘90 as Barry Allen, the Flash himself, and had guest starring roles in the new CW The Flash as well. He had a good run in One Life To Live, Santa Barbara, Guiding Light, All My Children and featured in the not so great Never-ending Story Part 2. Most recently he is in Climbing Life (A married couple adopts two young children who witnessed their own parents murder. To help the children accept the loss, the couple must first deal with their own past demons) and Ruby Herring Mysteries as John Herring. Night Sweats is another one in which he plays the head of a pharmaceutical company (A skateboarder investigating the mysterious death of his roommate is led into the inner workings of a self-help company, and the pharmaceutical lab behind it). He also played Sheriff Burns in a western series called Powder Burns.

Gail Leery - Mary-Margaret Humes: Miss Florida 1975 and third runner up for Miss USA, she was discovered by advertising her photo, name and phone number on a billboard visible from the 20th Century Fox studios lot. The billboard was seen by Mel Brooks, who phoned and asked her to read for a part in History of the World Part 1. Another solid supporting actress on many shows including Dukes of Hazzard, Knight Rider, The Fall Guy, Eerie Indiana, Matlock, Blossom and Motocrossed. Most recently she has done a string of Hallmark films.

Evelyn ‘Grams’ Ryan - Mary Beth Peil: She was most recently in Katy Keene, a spin off from Riverdale. She did make a guest appearance in Fringe with Joshua Jackson. She was also in The Odd Couple 2, The Good Wife and Mirrors.

Bessie Potter - Nina Repeta: Aside from Dawson’s, she hasn't had a lot of credits as a main character. The film Bloodmoon lists here as one of the main cast, with Gary Daniels, action powerhouse (Martial arts action film finds a retired detective returning to action to stop a martial arts master with steel fingers who is killing champions from all sports.) She was in Spongebob’s Movie as Woman with Stroller and Divine Secrets of the Ya-Ya Sisterhood as Lady at Gas Station. In her Instagram (@9ninarepeta) bio, she describes herself as “Bohemian Art Mom, Devoted Wife of AquaMan, Jazz/Blues Singer, AKA "Bessie" from Dawson's Creek, Mother to Banks-the kid artist who makes Sknab*z.”

The premier addition to the Essential Playlist has to be "I Don't Want to Wait" by Paula Cole, from her album This Fire.
We also added "Hand in My Pocket" by Alanis Morrisette, since the song is great! Click through using the links below.

For more information on Dawson's Creek, please check out these great resources of information. We thank the individuals who moderate these sites and appreciate their hard work.
What Song
IMDb
Wikipedia
Insider
Huffpost
The Hollywood Reporter

Head ove
Hr to our TeePublic store today and buy some merch! Every item sold sees a small return to us to cover our hosting costs.

Posted by The Rewatch Podcast at 3:10 PM