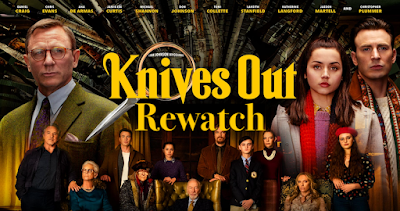 In this episode of The Rewatch Podcast, Cory and Nathan are not willing to eliminate any suspects as they discuss "Knives Out."

Knives Out grossed $165.3 million in the United States and Canada, and $143.9 million in other territories, for a worldwide total of $309.2 million.

After making the 2005 film Brick, writer and director Rian Johnson came up with the basic concept for Knives Out. In June 2010, he expressed interest in making an Agatha Christie-inspired murder mystery film. He told The Independent that he wanted to make the film after finishing Looper (2012). However, Johnson's next film project became Star Wars: The Last Jedi (2017). Johnson spent seven months writing the script after finishing his press tour for Star Wars: The Last Jedi.

In developing the film, Johnson cited several classic mystery thrillers and mystery comedies as influences, including The Last of Sheila, Murder on the Orient Express, Something's Afoot, Murder by Death, Death on the Nile, The Private Eyes, The Mirror Crack'd, Evil Under the Sun, Deathtrap, Clue, and Gosford Park. The 1972 version of Sleuth, a favorite "whodunit adjacent" of Johnson's, was also an inspiration, particularly for the setting and set design

The title was taken from the 2001 Radiohead song "Knives Out.â€ The name Harlan Thrombey is taken from a 1981 Choose Your Own Adventure whodunit, Who Killed Harlowe Thrombey?

Despite playing his mother in the film, K Callan is six years younger than Christopher Plummer.

Harlan dies on his 85th birthday. This is a reference to Agatha Christie who died at the age of 85. This film is a tribute to Christie's writing style and stories.

The police detective heard on the television series Marta's sister is watching is voiced by Joseph Gordon-Levitt, billed in the film's credits as playing Detective Hardrock. Gordon-Levitt has appeared in five of the films Rian Johnson has directed.

When Ransom tells his family at the will reading to "eat shit," he was originally supposed to tell them "fuck you." Rian Johnson decided to remove most of the "F" bombs in the script to secure a PG-13 rating and keep it more like the mystery films he used to watch with his family growing up. Chris Evans was the one who suggested substituting "eat shit."

Rian Johnson contemplated cutting Blanc's doughnut speech, but Craig convinced him that it was good. Watching the actor deliver it sold him on keeping the entire thing.

While filming the big reveal at the end of the film, Rian Johnson was surprised to discover that Daniel Craig had completely memorized the last 30 pages of the script, most of which are a monologue delivered by his character. Johnson ended up altering the way he shot the scenes, favoring long takes instead of shorter cuts, because he found that Craig's performance became better and better the longer each take became.

Several characters refer to a fictional Hallmark movie starring Danica McKellar titled "Deadly by Surprise." Though McKellar was not asked if her name could be used, she was delighted that it was included, and she shared her love for this film on Instagram. She later sent director Rian Johnson a knife with the words "Deadly by Surprise" engraved on it.

When Benoit Blanc is first seen by the audience, he is sitting in the study listening to Lieutenant Elliot question the Thrombey family members, playing the same note on the piano at seemingly random intervals. This was not random at all; after Blanc hits the piano key Lieutenant Elliot always asks the same question; "What time did you arrive at the house?" The piano key was Blanc's signal to Elliot to ask the question.

Before the release of Knives Out, Johnson said he would like to create sequels with Benoit Blanc investigating further mysteries, and already had an idea for a new film. In January 2020, Johnson confirmed that he was writing a sequel, intended to focus on Blanc investigating a new mystery. Craig is expected to reprise his role, and acknowledged interest in the project. On February 6, 2020, Lionsgate announced that a sequel had been greenlit.

M. Emmet Walsh replaced Ricky Jay, who died during production on November 24, 2018. A black & white photo of Jay is visible for a few seconds just before Walsh first appears on camera, at (55:06).

Another of Rian Johnson's cousins, Mark Johnson, did the title credits and based the font on an Agatha Christie series of paperbacks. Zack Johnson is another cousin, and he painted the cast paintings for the end credits.

Keeping with this years "spy" them, we're going to discuss Jamie Lee Curtis again, along with Arnold Schwarzenegger in the James Cameron directed "True Lies".

Posted by The Rewatch Podcast at 3:19 PM