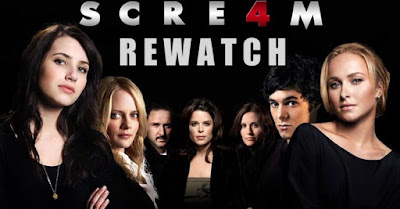 In this episode of The Rewatch Podcast, Cory and Nathan find the ties that bind as they discuss "Scream 4."

Scream 4 was Kevin Williamson's first time in 14 years being involved in the franchise as screenwriter. Scheduling conflicts with Dawson's Creek, The Faculty, Halloween H20: 20 Years Later and gearing up to direct Teaching Mrs. Tingle prevented him from writing Scream 3.

Screenwriter Kevin Williamson had repeated clashes with the Weinsteins (Bob and Harvey Weinstein). Scream 3 writer Ehren Kruger was brought in during production to do rewrites. Additional rewrites were made by Paul Harris Boardman. It was reported that the actors were not given the 140-page script past page 75 in order to protect the identity of the Ghostface killer.

The film also extensively used computer-generated imagery for the first time in the franchise. For example, instead of using a "collapsing knife", the knife's blade was added during post-production with CGI effects. Anderson's death scene in which he is stabbed in the forehead and walks a few feet while talking before finally falling to his death, was not in the script but was inspired by a "real-life medical emergency" Craven had seen in a documentary about a person being stabbed through their head and walked into an emergency room. He thought it was "extraordinary if somebody was stabbed in the head and still be alive for a while". Craven also did not tell the studio that he was taking this approach for the death scene, jokingly saying he hoped he would not be fired the next day.

With four installments, this marks the Scream franchise as being one of the only horror franchises to have both its main characters as well as its director (Wes Craven) return for all of its sequels.

Courteney Cox and David Arquette, who were married in 1999 after meeting during the making of Scream, had filed for separation in October of 2010. Although there was slight tension on the set, they were said to have remained professional and respectful of each other. They later divorced in May of 2012.

The footage from Stab includes the credit "A Robert Rodriguez Film." Rodriguez really did direct the footage, and also made Grindhouse, co-starring Scream's Rose McGowan and this film's Marley Shelton.

A bust of Henry Winkler can be seen briefly in the hallway of Woodsboro High.

This is the only one of the 4 scream movies where the police don't arrest a suspect.

In keeping with the tradition set in the previous films (as well as keeping with the film's theme of remakes), the rules for this movie are - Don't f*** with the original. You have to be gay in order to survive. Police officers will always die in horror movies (except for Bruce Willis), especially if they are near retirement, better looking than the other person, or have a newborn baby on the way. The original ending is the false ending in a remake. The killer is always right behind you.

This was the last film directed by Wes Craven before he died from brain cancer on August 30, 2015, at the age of seventy-six.

Murder-Mystery takes a different route in "Knives Out."

Posted by The Rewatch Podcast at 4:19 PM