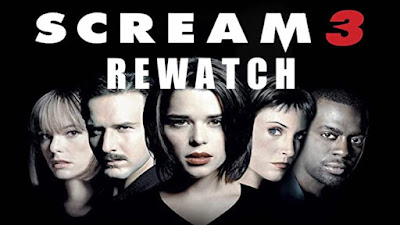 In this episode of The Rewatch Podcast, Cory and Nathan have their own private screening of "Scream 3."

Scream 3 was released just over two years after Scream 2, greenlit with a budget of $40 million, a significant increase over the budgets of Scream at $15 million and Scream 2 at $24 million. Williamson's involvement had been contracted while selling his Scream script, to which he had attached two five-page outlines for potential sequels, which would become Scream 2 and Scream 3, hoping to entice buyers with the prospect of purchasing a franchise rather than a single script. Craven too had been contracted for two potential sequels following a successful test screening of Scream and he returned to direct the third installment.

Bob and Harvey Weinstein approached Williamson in early 1999 to pursue a full script for a third installment to the Scream franchise. However, following his successes with the Scream series and other projects such as I Know What You Did Last Summer, Williamson had become involved in multiple projects including the development of the short-lived TV series Wasteland and directing his self-penned film Teaching Mrs. Tingle (1999) which Williamson had written prior to Scream and which had languished in development hell.

Unable to develop a full script for the production, Williamson instead wrote a 20-30 page draft outline for the film that involved the return of Ghostface to the fictional town of Woodsboro where the "Stab" series, a fictional series of films within a film that exist within the Scream universe and are based on the events of Scream, would be filmed. The Weinsteins hired Arlington Road scribe Ehren Kruger to replace Williamson and helm writing duties, developing a script based on Williamson's notes.

Shortly before production began on the film, two teenagers staged a deadly attack on their school, killing several students in what became known as the Columbine High School massacre. In the aftermath of the incident, many parties began looking for reasoning behind their actions and there came an increased scrutiny on the role of the media in society, including video games and film, and the influence it could have on an audience. With production of Scream 3 not yet underway, there were considerations about whether the film should be made at that time, aware of the potential for negative attention but the studio decided to press forward, albeit with changes.

In a 2009 interview, Matthew Lillard, who played Stu Macher in Scream, said that he had been contracted to reprise his role in Scream 3 as the primary antagonist, having survived his apparent death, orchestrating new Ghostface attacks from prison on high school students and ultimately targeting Sidney. Following the Columbine High School massacre shortly before production began, the script was scrapped and re-written without his character and this plot to avoid development of a film which associated violence and murder with a high school setting.

The studio remained much more apprehensive concerning violence and gore in Scream 3 than with previous installments, pressing for a greater emphasis on the series' satirical humor while scaling back on the violence. At one point in the production, the studio went as far as demanding that the film feature no blood or on-screen violence at all, a drastic departure for the series, but Craven directly intervened.

Roger L. Jackson again returned to voice the antagonist Ghostface and Jamie Kennedy reprised his role as Randy Meeks in spite of the character's death in Scream 2. Negative feedback following the death of Randy had the production consider methods to have had his character survive to appear in Scream 3 including having the character's family hide him away for safety while recuperating from his injuries, but it was deemed too unbelievable and the idea was replaced with the character appearing in a minor role via a pre-recorded video message.

Neve Campbell was concurrently shooting Drowning Mona (2000) and Party of Five (1994) during the production of this film. Because her "Drowning Mona" character had long, streaked hair, Campbell had to wear a wig to play Sidney Prescott, which required two hours of application time each morning.

Neve Campbell's contract allowed her to be on the set for just twenty days, which is why Sidney has less screen time than in the other films. As a result of her role being reduced, more emphasis was put on the supporting characters.

We're heading back to Woodsboro for "Scream 4"

Posted by The Rewatch Podcast at 6:07 PM