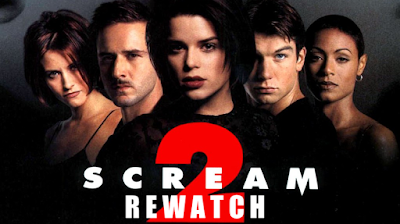 In this episode of The Rewatch Podcast, Cory and Nathan further their horror movie education as they discuss "Scream 2."

While writing the script for Scream, Williamson also developed two five-page treatments for potential sequels. Following the release of Scream, Williamson would confirm that he had considered a sequel concept where the character of Sidney Prescott would now be attending college and a copycat Ghostface killer would start a new series of murders. Dimension Films agreed to pursue the sequel in March 1997, by which point Williamson already had forty-two pages of the plot developed

By July 1997, filming began on Scream 2 but after Williamson transferred his script to the production it was leaked onto the Internet in full, revealing the identity of the killers and a large amount of the involved plot. This resulted in the production continuing to film with only a partial script while Williamson conducted extensive rewrites, changing much of the film's finale, the identities of the film's killers and drastically altering the roles of other characters such as Randy Meeks and Joel.

To avoid another such incident and prevent sensitive plot details being revealed through other means, the actors were not given the last pages of the script until weeks before shooting and the pages that revealed the killer's identity were only provided on the day the scene was shot to the actors involved. The short production schedule on Scream 2 and his work on other projects meant that Williamson's final script used for the film was detailed in some areas but lacking in others, with Wes Craven forced to write and develop certain scenes as they were being filmed.

Neve Campbell had been contracted to reprise her role as heroine Sidney Prescott in a potential sequel before filming had even begun on Scream, her character being the only one from the original film guaranteed to survive and lead a new film. Once production of a sequel was seen as inevitable, following the success of Scream, Dimension Films added sequel options for the actors whose character had survived the previous film; Courteney Cox as ambitious news reporter Gale Weathers, David Arquette as retired deputy sheriff Dewey Riley, Jamie Kennedy as film-geek Randy Meeks and Liev Schreiber as Cotton Weary, the man exonerated for the murder of Sidney's mother. Roger L. Jackson also returned to voice the character of Ghostface.

The rules for a horror movie sequel as stated by Randy (Jamie Kennedy) are: 1. The death total is always greater. 2. The murder scenes are always much more elaborate, with more blood and gore. The third rule to surviving a sequel was cut from the movie, but appears in its trailer, "And number three, never, ever under any circumstance, assume that the killer is dead."

Paulette Patterson, who plays the usher who hands masks to Maureen (Jada Pinkett Smith) and Phil (Omar Epps), won her role in a contest sponsored by MTV.

Neve Campbell would shoot Party of Five (1994) on Mondays and Tuesdays during the day, and spent Wednesday, Thursday, Friday, Saturday, and Sunday on this movie, most of which were night shoots. On Sundays, she would work all night until 6 a.m., go home for fifteen minutes to shower off all the fake blood and immediately go to the Party of Five (1994) set to shoot all day, all without sleeping.

David Warner (Gus) was personally chosen by Wes Craven for a cameo, because Craven had been impressed with Warner's acting ever since he saw him in The Omen (1976). Warner had also auditioned for the main part of Freddy Krueger in A Nightmare on Elm Street (1984).

Scream goes Hollywood, and we'll be there to discuss "Scream 3."