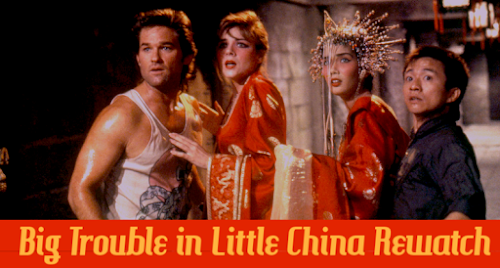 In this episode of The Rewatch Podcast, Cory and Nathan have a lot of questions as they discuss "Big Trouble in Little China."

The first version of the screenplay was written by first-time screenwriters Gary Goldman and David Z. Weinstein. Goldman had been inspired by a new wave of martial arts films that had "all sorts of weird actions and special effects, shot against this background of Oriental mysticism and modern sensibilities". They had written a Western originally set in the 1880s with Jack Burton as a cowboy who rides into town

The studio brought in screenwriter W. D. Richter, a veteran script doctor (and director of The Adventures of Buckaroo Banzai) to extensively rewrite the script, as he felt that the Wild West and fantasy elements did not work together. The screenwriter modernized everything. Almost everything in the original script was discarded except for Lo Pan's story. Richter realized that "what it needed wasn't a rewrite but a complete overhaul. It was a dreadful screenplay. This happens often when scripts are bought and there's no intention that the original writers will stay on". Richter used Rosemary's Baby as his template, presenting "the foreground story in a familiar context“ rather than San Francisco at the turn-of-the-century, which distances the audience immediately“ and just have one simple remove, the world underground, you have a much better chance of making direct contact with the audience". He wrote his own draft in 10 weeks.

The studio felt Kurt Russell was an up-and-coming star. Russell was initially not interested because he felt there were "a number of different ways to approach Jack, but I didn't know if there was a way that would be interesting enough for this movie". After talking to Carpenter and reading the script a couple of more times, he gained insight into the character and liked the notion of playing "a hero who has so many faults. Jack is and isn't the hero. He falls on his ass as much as he comes through. This guy is a real blowhard. He's a lot of hot air, very self-assured, a screw-up". Furthermore, the actor felt that "at heart he thinks he's Indiana Jones but the circumstances are always too much for him".

John Carpenter had seen Dennis Dun in Year of the Dragon and liked his work in that film. He met the actor twice before casting him in the role of Wang Chi only a few days before principal photography. The martial arts sequences were not hard for Dun who had "dabbled" in training as a kid and done Chinese opera as an adult. He was drawn to the portrayal of Asian characters in the movie as he said, "I'm seeing Chinese actors getting to do stuff that American movies usually don't let them do. I've never seen this type of role for an Asian in an American film". Jackie Chan was at one point considered for the role of Wang Chi but decided after the box office disasters of The Big Brawl and The Protector he should put more time and effort into his career in Hong Kong's film industry with Police Story instead.

The studio pressured Carpenter to cast a rock star in the role of Gracie Law, Jack Burton's love interest, but Carpenter wanted Kim Cattrall. The studio was not keen on the idea because at the time Cattrall was primarily known for raunchy comedies like Porky's and Police Academy. She was drawn to the film because of the way her character was portrayed. "I'm not screaming for help the whole time. I think the humor comes out of the situations and my relationship with Jack Burton. I'm the brains and he's the brawn

Kurt Russell confessed on the DVD commentary that he was afraid of starring in the movie because he had made a string of movies that flopped at the box office. When he asked John Carpenter about it, he told Kurt that it didn't matter to him - he just wanted to make the movie with him.

John Carpenter envisioned the film as an inverse of traditional scenarios in action films with a Caucasian protagonist helped by a minority sidekick. Jack Burton, despite his bravado, is constantly portrayed as rather bumbling; in one fight sequence he even knocks himself unconscious before the fight begins. Wang Chi, on the other hand, is constantly portrayed as highly skilled and competent.

John Carpenter and Kurt Russell explain on the audio commentary that the test screening was so overwhelmingly positive, that both of them expected it to be a big hit. However, 20th Century Fox put little into promoting the movie, and it ended up being a box-office bomb. In addition, the film was released in the midst of the hype for Aliens (1986), which was released sixteen days afterwards. However, it went on to be a huge cult hit through home video. Carpenter and Russell explained that the reason the studio did little to promote the film, was because they simply didn't know how to promote it.

A tie-in video game of the same name was published in 1986 by Electric Dreams Software for the ZX Spectrum, Commodore 64 and Amstrad CPC. Critical reception was mixed.

On February 27, 2014, BOOM! Studios announced they were working on a comic book series. The comic book is written by Eric Powell and John Carpenter with artwork by Brian Churilla. The series began in June 2014. BOOM! released a crossover comics miniseries between Jack and Snake Plissken titled Big Trouble in Little China / Escape from New York in October 2016.

In August 2016, Upper Deck released Big Trouble in Little China Legendary deck-building card game. It is a semi-cooperative game for 2-5 players using the deck-building mechanic in which players purchase cards from a central pool to work together against the "villain" deck. The cards features original artwork based on characters from the movie. It comes with 400 cards and a special playmat.

As we head towards October, it's time to "Scream"

Posted by The Rewatch Podcast at 5:46 PM