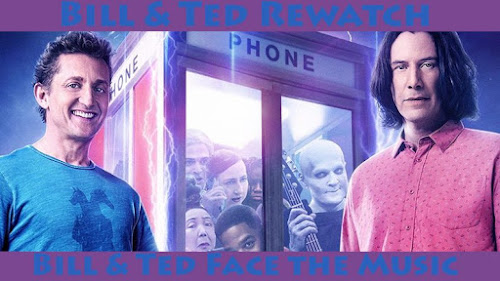 In this episode of The Rewatch Podcast, Cory and Nathan get infinite inspiration as they discuss "Bill & Ted Face the Music."

During filming in a neighborhood in Louisiana, the cast and crew were often greeted by local residents. One day, Keanu Reeves noticed a sign on a lawn that read "You're breathtaking". He stopped, got out of the car, went to the sign and autographed it. After finding out to whom the sign belonged, he went to the family and posed for a photo with them.

Alt. Rock band Weezer released an original song Beginning of the End (Wyld Stallions Edit) as the first single for the film's soundtrack on August 14, 2020. Weezer's first gig was a closing act for the Alt Rock band Dogstar in 1992, which Keanu Reeves was a member of at the time.

Samara Weaving won the role of Thea in this movie after Keanu Reeves found out that she was the niece of Hugo Weaving. Keanu had worked with Hugo on The Matrix (1999) trilogy.

In May 2020, Alex Winter launched a social media appeal for members of the public to submit 30-second video clips of themselves rocking out to a music clip from the film, with some of the clips being selected and used in the finished film.

In this film, Kelly is Rufus' daughter. The late George Carlin played Rufus in the first two Bill & Ted films and his real-life daughter's name is Kelly. The "Kelly" role is named as a way to recognize and honor Carlin.

To prepare for his role as Bill, Alex Winter took acting lessons again as he was busy with his filmmaking career.

It took over a dozen years for this movie to materialize, despite having had a script ready since at least the late 2000s. There were also certain technical problems in its development, as there were problems in searching for a distributor and certain script revisions. The film was eventually approved in 2018, and filming began on July 1st, 2019.

In Death's apartment in Hell on the shelf is the game Battleship. Bill and Ted played a number of games to get Death to help them and one of them was Battleship in Bill and Ted Bogus Journey (1991) .

The 2nd trailer has revealed that Ted's younger brother Deacon Logan is married to Missy, who was first married to Bill's dad and then Ted's dad in the previous two films. Meaning, she went from being Ted's step-mom, to his sister-in-law.

As we head towards October, it's time to "Scream"

Posted by The Rewatch Podcast at 2:28 PM