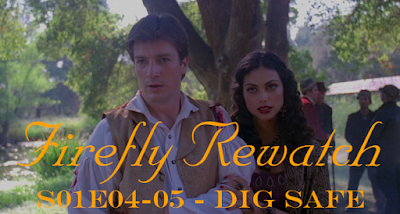 In this weeks episode of The Firefly Rewatch, Cory and Tom are unlucky in love and business as they discuss episodes 4 & 5, "Shindig" and "Safe."


The Serenity crew finds themself heading back to Persephone in search of work, leaving Inara time to schedule a few days with a client named Atherton. While Zoe and Wash enjoy a little personal “couple“ time together, Kaylee finds herself enamored with a fluffy dress, before rushing off after an insult from Mal.


Badger shows up and gives the details of a new job to Mal and Jayne which involve a man named Warwick Harrow who refuses to deal with Badger while Inara prepares for her meeting with Atherton at a high class party later that night, at which he asks her to stay with him forever as his own personal companion, a request that she begins to consider.

Mal ends up buying the fluffy dress for Kaylee as a part of a cover so they can attend that same party and find Warwick Harrow and hopefully get hired by him. While this all starts to work out, Mal sees the way Atherton treats Inara as property and after talking with her as they dance together, he punches Atherton, unwilling to put up with his condescending attitude anymore. However, Mal learns quickly that that very action is an invitation to a duel, in this case, a sword fight to the death.

While the rest of Serenity’s crew begin a plan to extricate their captain, Badger shows up with his men to make sure they don’t leave, explaining that to do so would sully his own name and reputation. While he keeps the crew there, River appears suddenly and starts to talk to Badger using his accent and speaks of a shared homeworld before leaving to return to her room.

Back off the ship, Mal has been put up in quarters to ensure he doesn’t try and run off from the duel, and Inara attempts to teach him some sword fighting skills as he asks her not to leave while at the same time insulting her profession.

The next morning the duel begins and while Mal thinks he has the upper hand, it’s clear Atherton was toying with him  and begins to injure him in several areas. As Atherton prepares to deliver the final blow, Inara begs him to not do it and promises she will stay with him if he relents. Mal uses the distraction to hit Atherton with his broken sword, subduing the man and holding him at bay with his own sword. Atherton insults Inara and threatens to put her out of work to which she replies that he has now earned a mark against him which will cause all companions to not accept his offers from now on.

As Mal and Inara walk off, Warwick, impressed with Mal’s dedication, decides to hire him to move his cargo off world. They return to the ship, dismissing Badger and his crew, while Kaylee retires to her room, gazing lovingly at her fluffy dress. The next morning as Mal recovers, he and Inara share a drink while looking over their cargo, a giant herd of livestock.

According to costume designer, Shawna Topcic, Zoe doesn’t remove her necklace because it represents her marriage bond to Wash.

Have you noticed the “Blue Sun” logo scattered in the background? According to the fan wiki, the Blue Sun Corporation is the richest and most politically connected corporation in the system.


The game that Jayne, Book and Simon play is called “Tall Card,” created by the writer of this episode, Jane Espenson. The rules of the game were explained to the actors and later appeared on the Firefly website. A version of the game was created by Toy Vault and can be purchased on Amazon or Ebay.

The chandelier at the ball has a huge gold ring around it. It’s actually The One Ring from Lord of the Rings, complete with Elvish script.

"Captain Tightpants" is an inside joke referring to an incident that occurred while shooting the original pilot episode "Serenity." When Kaylee gets shot and Mal bends over to help her, the back of his pants split.

As the crew begin to wander through the streets of Persephone, a ship with an oval front section followed by two square sections lands in the background. This ship is the Starlight Intruder from the Star Wars graphic novel series Dark Empire.

The Badger role was supposed to be played by series creator, Joss Whedon.

The final scene revealing the cargo as cattle was created digitally because, among other reasons, cattle do not walk on grating, of which the cargo bay floor is made.

Edward Atterton played Atherton Wing. He did a small handful of roles after Firefly, including a couple episodes of Alias, and a show called Three, about some criminals who are forced to work together. He was also a supporting actor in The Man In The Iron Mask.

Warwick was played by Larry Drake. He was in Darkman and Darkman 2 as Durant, the original Karate Kid as Yahoo 1, and a horror film called Dr. Giggles. His biggest TV role is probably playing Benny Stulwicz in LA Law, but he has also made a name for himself doing voices for various animation projects, such as Batman Beyond, Justice League, Scooby Doo and Johnny Bravo to name a few.

Murphy was played by Larry Pennell. We’ve seen him before in the Quantum Leap episode “Goodbye Norma Jean” (the Marilyn Monroe episode) as Clark Gable, playing him again later in a TV movie (also about Marilyn).

The younger suitor was Michael McMillian. Has recently made a name for himself in My Crazy Ex-Girlfriend and True Blood. He also had some other supporting roles in various shows, and a lead role in the Amanda Byrnes sitcom What I Like About You.

Roy Werner played a gentleman. Aside from a number of bit parts, he had a role in I Can Still Tell Your Wife Bill.com; it’s a movie, but the website is a collection of pictures and statements that are supposedly used by the jilted character who was a mistress attempting to blackmail Bill.

Simon reminisces about his and River’s past when they were children while at long last, Serenity lands at her destination, where Mal and Jayne along with Book begin negotiating for payment for their livestock cargo while Simon, River, Inara and Kaylee head into town.


River ends up wandering off, participating in a lively ceremony and dance, easily picking up the complex moves. Simon recalls again his past when he tried to warn his parents that something was wrong with River at the institute when he received letters from her that contained bizarre phrases and simple misspellings, but to no avail as they saw no issues.

Meanwhile Mal’s bargaining goes sideways as the local authorities show up and a shootout begins between them and Mal’s customers. The shootout ends quickly, with Mal retrieving their money, but unfortunately Book was shot, leaving them to rush him back to the ship, and sending Wash to retrieve Simon.

His search is in vain however as Wash reports that the town has knowledge of hill people who live on the outskirts and often kidnap people they find useful, mostly tradesmen like the doctor and concludes he was likely taken. Knowing every second counts with Book’s fatal wound, he chooses to take off to find medical help elsewhere rather than waste time trying to search for Simon and River.

Meanwhile, Simon thinks back to the time he tried to find someone to help him find River and ended up being arrested for it, only to be bailed out by his father who chastised him and warned him he would not do so again. Simon and River are then taken to the hill people’s town where there is plenty for a doctor to do. River makes a mental connection with a young mute girl which causes the locals to accuse her of being a witch. Further ire is aroused when River reads the mind of the local leader and implies that he killed the previous man in charge, leading him to order her burnt at the stake to purge the evil from her.

Back on Serenity, Mal has little choice but to ask The Alliance for medical help. They are at first unwilling but upon seeing Book’s ID card they immediately rush him into surgery, healing his wound, and then allowing them to leave. Mal asks why that is and Book says he may tell him the reason someday.

As River is being readied for the fire, Simon attacks several men and then climbs up to the stake with her, telling the men to light it, intending to die with his sister. Luckily, Serenity appears in the night sky above them with Jayne training a laser scope on the townspeople as Mal and Zoe waltz into the area, brandishing their guns. They receive Simon and River and return to the ship. Simon asks Mal why he came back, who answers simply he is part of his crew, as they all sit down for a well earned meal.

There is a Chinese proverb that says, "A badly painted tiger looks like a dog; a badly carved swan looks like a duck." The meaning of this proverb is that it's better not to do certain things than to do them badly.
The final meal for the episode was steak, courtesy of their cargo.

Isabella Hoffman played Simon's mother, Regan. Of her 90 credits, the majority are one and done appearances in sitcoms or dramas. She did have recurring roles in the later seasons of JAG and Providence (a doctor with a ghost friend), and a leading role in Beggars and Choosers (a network executives comedy). Her biggest role was Kate in the Judd Hirsch vehicle Dear John. She was also in The Flash and Legends of Tomorrow as Professor Stein's wife, Clarissa.

Andy Rolfes played older Grange. He had a bunch of one hit roles, but we've seen him before in the Sliders episode “Exodus Part 2” as a sergeant.

Doralee was played by Erica Tazel. Her biggest role was in Justified, where she was a main cast member. She’s also done a bunch of one off parts in shows like God Friended Me, Legends of Tomorrow, The Orville, NCIS and The Office.

Young Simon was played by little known actor Zac Efron, who has apparently starred in movies such as The Greatest Showman, High School Musical, Hairspray, Extremely Wicked (Ted Bundy story), Baywatch, Neighbors, and so many more. Most recently he voiced Fred Jones in Scoob.

Cory and Tom will be discussing episodes 6&7, "Our Mrs. Reynolds" & "Jaynetown."

Posted by The Rewatch Podcast at 6:30 PM