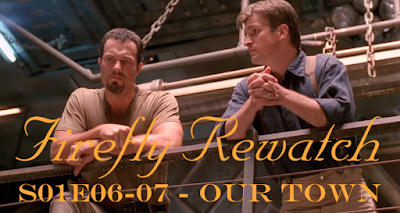 In this weeks episode of The Firefly Rewatch, Cory and Tom are loved and worshiped as they discuss episodes 6 & 7, "Our Mrs. Reynolds" and "Jaynestown."

The Serenity crew end up taking down a group of bandits on the planet of Triumph, saving the local townspeople and resulting in a celebration lasting well into the night with a drunken Mal and Jayne being given gifts, a wreath for Mal and a rainstick for Jayne. The next morning Serenity takes off for their next destination of Beaumond but are stunned to see they have a new passenger stowing away on board, a girl named Saffron who introduces herself as Mal’s wife.

Book consults an encyclopedia and informs the crew that Mal actually did marry the girl during the celebration by accepting her wreath and then drinking from her cup of wine. After some joking by the crew, Mal gets flustered and ends up hurting Saffron’s feelings and she runs off. After a pep talk from Mal, Saffron goes to cook a meal for her new husband, showing herself to be more of a subservient type of wife.

Mal visits Inara to get away from his wife and the two verbally spar before he leaves and is confronted by Jayne who wishes to trade his favorite gun, Vera, in exchange for Saffron to which Mal refuses, stating again that she is not property to be sold or traded.

Later than night, Saffron begins to seduce Mal in his quarters to which he resists but ultimately allows himself to be kissed which causes him to pass out due to a narcoleptic drug on her lips. Saffron then goes to Wash and tries to again use her powers of seduction but to no avail, leaving her to physically injure him in order to sabotage their piloting controls before fusing the cockpit door shut.

While trying to escape, Saffron runs into Inara and immediately tries to seduce her but she sees through her ruse and the two fight. Saffron manages to get away and escapes to a shuttle while Inara rushes to Mal, fearing he is dead but upon finding him alive, albeit unconscious, she kisses him, resulting in her succumbing to the narcotic lipstick residue as well.

Upon waking, they discover that Saffron had locked the controls on a specific heading, a carrion house net where ships are disabled, and then fixed up for their own use or sold for parts, with the crew inside them being killed. While Wash and Kaylee try to repair the ship, Jayne uses Vera to shoot out one of the control nodules on the net, shorting it out before also firing a shot into the main control room, killing the engineers who had been long time partners with Saffron.

With Serenity repaired, Mal finds Saffron on a snowy planet and confronts her, holding her captive as they banter back and forth, eventually ending with Mal not killing her but knocking her unconscious, leaving with his stolen shuttle. Back on board, Mal asks Inara about how she ended up unconscious, not believing her story that she fell. Mal incorrectly assumes that it happened because Inara kissed Saffron, leaving her surprised and glad that her kiss with him wasn’t discovered.

Vondie Curtis-Hall has directed on several TV series, including ER, The Shield, Boston Legal and Gossip Girl. He’s mostly known as an actor in small parts, with his more noticeable roles being the basketball game vendor in Coming to America and Miller in Die Hard 2.

Christina Hendricks played Saffron. She is, of course, best known for playing Joan on Mad Men. She was a lead actor in the shows Good Girl and Beggars and Choosers (network exec comedy) and Kevin Hill (lawyer raising a new inherited kid drama). She played Lois Lane in All Star Superman, as well. Most recently she played Officer Jaffe in Scoob and Gabby Gabby in Toy Story 4. She’s also a supporting voice actor in an animated series called Solar Opposites, which stars Thomas Middleditch, Sean Gianbrone and Tom Kenny.

River did have a speaking part in this episode, but it was cut because she would obviously be able to sense the subterfuge going on.


Serenity touches down in the town of Canton to procure some merchandise for a job, with Jayne having many misgivings about going in due to some trouble he had there years ago.
As Mal, Jayne, Kaylee, Wash, and Simon tour the town with Simon posing as the well to do boss of them all, looking to purchase their precious mined ceramic clay, they come across a statue of Jayne and quickly learn that the townspeople, known as mudders due to their job of mining the mud for the special clay, regard Jayne as a folk hero, even composing songs about him.

Jayne explains that years ago after he tried stealing money from the magistrate, Higgins, he was forced to toss everything he could from his ship in order to escape, which included the money. When the money landed in the middle of the mudders’ camp, they took him to be a sort of Robin Hood figure and began their hero worship.

When the mudders discover Jayne has returned, a celebration is started at the pub while a man contacts Mal and informs him that his contact who had the merchandise was found out and killed. Mal convinces the mudders to hold a special day to celebrate Jayne’s return so that they can use the distraction to get the cargo loaded up while Kaylee and Simon get drunk as the doctor starts to reveal some feelings for Kaylee.

Meanwhile, Inara has business with Magistrate Higgans who has hired her to help his son Fess finally become a man and lose his virginity. Higgans tries to rush her into it but she escorts him out, explaining that she will handle things the way they are supposed to be done according to Companion training. Once Inara and Fess have time together, she puts him at ease and helps him realize that to truly become a man he needs to be his own person and not let his father rule over him.

Back on Serenity, River has started to write in Book’s bible in an attempt to “fix it” because of the things that don’t make sense. Book explains it’s not about making sense but having faith.

Word gets back to Higgins that Jayne has returned resulting in him freeing a prisoner named Stitch Hessian who has been in a hot box prison ever since Jayne betrayed him and kicked him out of his ship along with the money so many years ago. Now armed and angry, he heads off to find Jayne.

The next morning, Simon and Kaylee awaken in each other’s arms but once Mal shows up, Simon gets flustered and inadvertently offends Kaylee, leading her to go off with Mal, leaving Simon at the pub. Stitch shows up and beats up Simon as he interrogates him on Jayne’s whereabouts. When he hears the mudders shouting for Jayne, he drags Simon to the celebration.

Jayne, still reveling in his newfound fame, gives a speech that impresses even Serenity’s crew but is interrupted when stitch shows up, threatening to kill Simon. As Simon gets help from Kaylee, Stitch gives a speech about what really happened the day the money fell, and raises his gun to shoot Jayne but a young mudder who Jayne had connected with leaps in front of him, taking a fatal bullet. Jayne is enraged and throws a knife at Stitch and the two begin fighting with Jayne eventually beating him to submission. Distraught over the boy’s sacrifice, Jayne tells the mudders that aren’t any heroes, just people like him. Another young boy returns Jayne’s knife to him, and Jayne, realizing they still see him as a hero, pushes down his statue and leaves.

As Mal and crew begin to take off, Wash discovers they have been landlocked by magistrate Higgins. Inara comes to see what the problem is when suddenly the landlocked is released, as Fess has finally decided to stand up to his father and release the ship as a thank you to Inara for teaching him a valuable lesson.

As Jayne says he doesn’t understand why the boy made the sacrifice to save him, Mal explains that the statue isn’t about him, the person, it’s about what the townspeople need, an idea, or something to believe in.

Higgens was played by Gregory Itzin. We’ve seen him before in the Voyagers! episodes “Bully and Billy” and “Pursuit” playing a German revolutionary named Ernst and a newspaper writer named Davis. He was also in Quantum Leap playing Sam Phillips in the episode “Memphis Melody.” He’s a true “that guy“ appearing in so many guest spots over the years, as well as a run in 24 as the president. He’s also had recurring roles in Big Love, the Mentalist and Covert Affairs.

The Foreman was played by Jordan Lund. We’ve seen him playing Noble John Spanier in The Flash ‘90 episode “Watching The Detectives” (a female investigator finds out Barry’s identity and he is blackmailed by the Mayor). He’s had bit parts in Fletch Lives, Adventures of Ford Fairlane and various Star Trek shows, among others.


The Well Dressed Man was Bob McCracken, who we’ve seen in the Lois and Clark episode “I’m Looking Through You” as the Invisible Man.

Adam Baldwin admitted to swiping the Jayne statue's head as a souvenir after filming the episode. Later on, additional shots were needed for the episode (scene where the crew first sees the statue) and the crack where the head was broken off and then reattached is visible.

Posted by The Rewatch Podcast at 11:00 AM