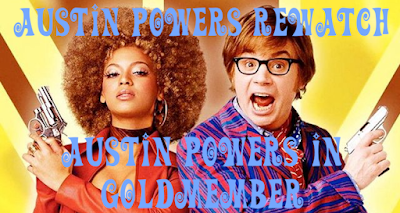 In this episode of the Austin Powers Rewatch, Cory and Nathan get things happening as they discuss "Austin Powers in Goldmember."

The title of the film, Goldmember, led to legal action being taken by MGM, the distributors of the James Bond film franchise, that briefly led to the film's title being removed from promotional material and trailers. The dispute was quickly resolved and the film title remained unchanged on the provision that the film would include trailers in its cinema releases for the then-upcoming James Bond film, Die Another Day, and The Lord of the Rings: The Two Towers.

Mike Myers has said that his glasses in all three movies are meant to look like those worn by Sir Michael Caine in The Ipcress File (1965), so Caine took the original glasses (model "Teviot 74" by U.K. Optical) to the set, and wore them as Nigel.

Seth Green claims that the ending sequence showing Scott Evil dancing around his father's lair was unscripted. While fooling around between takes, his hi-jinks were caught on film, and director Jay Roach decided to include it in the movie.

Katie Couric took great pride by previewing her cameo role in the movie as a prison guard. On Today, Couric showed a clip of the film featuring her and explained how visual effects were used to put a unibrow on her face.

Heather Graham reprised her role as Felicity Shagwell in a scene that was ultimately cut. Will Ferrell reprised his role of Mustafa in another deleted scene, in which he has to answer a question after being asked four times.

The e-mail that Austin receives while explaining "the internet" to Foxxy reads: "Dear Mr. Powers, a new ATM card will be sent to you by FedEx, because your account was compromised by an unknown hacker, who obtained your PIN while you were purchasing an mp3 player on eBay, your bank".

Signs found in the background of Dr. Evil's sub: All Henchmen Must Clock In With Their Own Timecard, 42 Days Since Last Accident/Liquidation, Hang In There!

It's time for another Random Rutger Rewatch! This time, we're checking out "The Osterman Weekend."

Posted by The Rewatch Podcast at 5:06 PM