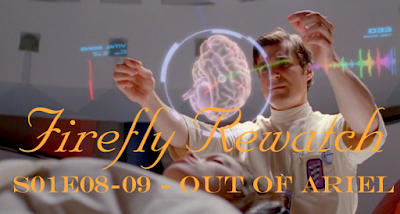 In this weeks episode of The Firefly Rewatch, Cory and Tom drift into a heist as they discuss episodes 8 & 9, "Out of gas" and "Ariel."

Episode Title: Out of Gas


After a failing catalyzer cripples Serenity’s engines, cutting off life support, and causing a fireball to fly through the ship injuring Zoe, Mal orders Wash to leave her in the infirmary and attempts to send a buoy out to find help, which he does reluctantly. However with few options remaining, Mal is forced to order the crew away in the shuttles in hopes of finding help while he stays behind in case someone does answer the buoy.

As Mal waits in the cockpit, going in and out of sleep, a ship does eventually answer and claims to have a replacement part but is wary of Mal, asking him to have no weapons when they come aboard. Unfortunately for Mal, his rescuers do come aboard with weapons, holding him at gunpoint while they search the ship to see if Mal’s story was true. Upon confirming, the leader of the rescue ship shoots Mal, saying he’s taking his ship in exchange for the catalyzer. Mal grabs a nearby gun and orders the would-be rescuers off the ship to which they quickly oblige.

Mal grabs the replacement part and begins a slow, injured walk to the engine room, all the while reminiscing about when he first got Serenity and showed it to Zoe. Zoe fails to see the potential in the ship but ultimately follows her captain, as Mal flash forwards ahead to when they meet their possible pilot, Wash, whom Zoe takes an immediate dislike to. Mal explains they need a pilot considering they have a genius engineer signed on named Bester.

However, in another remembered memory, when Mal visits Bester later to find out why the ship isn’t ready to go, he finds his engineer in flagrante delictico with a young woman. Bester tries to explain that a certain part of the engine is just broken but the young woman, Kaylee, quickly interjects saying the part isn’t actually needed and manages to jury rig a fix that gets the engines running, leaving Mal to offer her Bester’s job.

Mal next recalls when he met Inara who claims that he will rent her the shuttle for a fraction of the price because of the respectability she can bring to his ship, and gives him two requirements: never come in without being invited and to not call her a whore ever again. Mal flashes ahead next to the town when he and Zoe are being held at gunpoint by a group of men, including a man named Jayne. As they try to talk their way out of being shot, it’s revealed Jayne is not earning a good commission and his style of living is rather low. When Mal offers better pay and living quarters, Jayne turns on his gang and shoots them, accepting the offer.

Back in the present, Mal makes it to the engine room and eventually manages to get the replacement part in, and makes his way to the bridge to recall the shuttles, but collapses due to a prolonged absence of oxygen and the shot blast he took to the guy. He awakens to find himself surrounded by the crew, who returned on Zoe’s orders, not wanting to abandon Mal. The crew leaves him to rest as Book assures Mal that they will still be there when he awakens.

Mal flashes back to one final memory where a salesman is selling him on a beauty of a ship that will last him years, when he turns suddenly and sees the ship that actually captures his heart, Serenity, awaiting his purchase.

The director of this episode, David Solomon, got his start as an editors assistant on My Favorite Year in 1982 and Risky Business in 1983. He went on to be an editor on shows such as Bay City Blues, Hill Street Blues, Miami Vice, Perry Mason, and then Matlock where he also got his first directing credit. Firefly is his second directing credit, but he gained more on Buffy, Kevin Hill, Burn Notice, Chuck, Dollhouse, Fringe, Once Upon a Time, Extant, Grimm, Zoo, Agents of SHIELD and Star Trek Discovery, to name a few.

Bester was played by Dax Griffin. Recently he played young Hank in Antman and Ant Man and the Wasp. He starred in The Bold and the Beautiful for 54 episodes and Sunset Beach for 326 episodes, as well as doing a bunch of guest roles.


Zoe was knocked unconscious briefly in this episode. Gina Torres had just married Lawrence Fishburn and the couple went on their honeymoon, which meant she wasn’t available for the first 4 days of shooting. The couple later separated and their divorce was finalised in May of 2018.


Alan Tudyk took the big red "recall" button from the Serenity set and presented it to Joss Whedon, telling him that if Whedon managed to get the series renewed, he could press it to call the cast back


With Shepard Book dropped off for some meditation at an abbey, the crew heads to a core planet called Ariel in order for Inara to undergo her annual medical exam. Mal orders everyone else to remain on board Serenity due to the high number of Alliance officers on world. During the casual talk in which Jayne insults Simon yet again, River ends up attacking him  and slashing his chest. Mal tells Simon he needs to keep River under control but then asks sympathetically if River is getting worse, to which he says yes.


Simon comes up with a plan for the crew to make a lot of money: help smuggle him and River into the leading medical facility there so he can use their equipment to scan River and he will instruct them on how to obtain valuable medicine from the hospital storage.

Simon trains the crew on specific medical terms so they can pass easily through the hospital while Kaylee and Wash hit up a junkyard to find parts to craft their own medical vehicle rather than steal one and risk getting caught for that. Finally, Simon and River are put to sleep, pretending to be dead.

The plan goes well without a hitch and they all get inside easily, with Mal and Zoe heading off to procure the meds while Jayne stays with Simon and River as they start to wake up. Jayne however makes a small detour and contacts the police, informing them he has arrived with the two fugitives and confirming his reward.

Mal and Zoe end up being confronted by a doctor who questions their credentials, but Zoe takes him out by using a defibrillator and they continue on to the med supply storage area. Meanwhile, on their way to the scanning room, River indicates a patient who is going to die and Simon ends up intervening, saving the man’s life and scolding the young intern who was administering the wrong drug. As they scan River’s brain, Simon learns that they had cut into her amygdala, taking away her ability to control her emotions.

Jayne tells them that the plan has changed and begins to head out but are soon confronted by federal marshals and arrested, including Jayne who was double crossed by the feds. As Mal and Zoe attempt to find out why Simon and the others missed their rendezvous for escape, Jayne manages to start a fight in which Simon joins in, overcoming their guards.
Elsewhere the two mysterious blue gloves men show up and begin using a blue rod which makes people bleed, causing death to anyone who came into contact with River and Simon. Mal and Zoe show up in the nick of time to get them out and back onto Serenity with Inara docking her shuttle as well, as they take off and escape. Simon praises Jayne for his bravery in helping them escape.

As they get away, Mal hits Jayne with a wrench and locks him in the airlock and opens it, intending to let him die when they leave the atmosphere for space, due to suspecting his traitorous deal with the feds. Jayne denies it but ultimately realizes the captain is serious and admits his wrongdoing, telling him to make up a story so they don’t know what he did. Mal tells Jayne if he is ever going to stab him in the back again, do it to his face, as he closes the airlock but leaves Jayne inside for the time being.

The director of this episode, Allan Kroeker, has a TV directing career going back to 1979. He’s worked on shows such as The New Twilight Zone, Friday the 13th: The Series, Poltergeist: The Legacy, Star Trek: Deep Space Nine, Voyager & Enterprise, Earth: Final Conflict, Charmed, Supernatural, Dollhouse and Defiance.

The futuristic body carriers used to transport Simon and River are actually automotive rooftop cargo boxes made by Thule (the Evolution series), they were in production at the time of filming.

In the scene where Wash and Kaylee are in the junkyard, there is a sign in the background for "Flynn's" in the same style and font as in the movie Tron.

When River wakes in the morgue, there is a Star Trek: The Next Generation LCARS style display panel behind her.

Blake Robbins played the officer. He wrote, directed and starred in The Sublime and the Beautiful, a film about a teacher raising a family with his wife when tragedy strikes, and starring his real life family. He has also had recurring characters on The Office (Tom Halpert) and Oz (Officer Brass).

The obnoxious doctor was played by Tom Virtue. We’ve seen him in the Lois and Clark episode “Top Copy” as the Doctor. He also played Major Derlin in the NPR production of Return of the Jedi, and has had bit parts in American Horror Story, The Green Book and Timeless.

Posted by The Rewatch Podcast at 5:24 PM