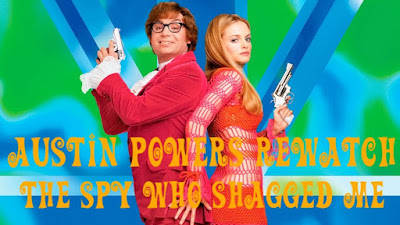 In this episode of the Austin Powers Rewatch, Cory and Nathan have their mojo working overtime as they discuss "Austin Powers: The Spy Who Shagged Me."

An early trailer for this film was unusual in that it referred to another film scheduled for release in the summer of 1999. It included the voice-over "If you only see one movie this summer, see Star Wars: Episode I - The Phantom Menace (1999). But if you see two movies, see Austin Powers: The Spy Who Shagged Me (1999)."


Theme Song - Dr. Evil by They Might Be Giants

The movie's soundtrack contains the 1999 hit "Beautiful Stranger" by Madonna. The song won a Grammy Award in 2000. Mike Myers appears as Austin Powers in the video, directed by Brett Ratner. Another single "Word Up!" by Mel B, was released on June 28, 1999. It peaked at number 13 on the UK Singles Chart.

There were two variations of the posters; one of them asterisked out the middle of the offending word. Other posters had named the film as Austin Powers 2. According to the Collins English Dictionary, the use of the word "shag" in the film's title helped to increase the word's acceptability, reducing its shock value and giving it a more jocular, relaxed connotation.

Although the word "shag" is less offensive in the U.S. than most other countries, not all translated the title into something less raunchy. The Norwegian title of the movie is "Spionen som spermet meg", which is a slightly dirtier way of saying "The spy who ejaculated on me". Singapore considered a title change to The Spy Who Shioked Me (shiok means "to feel good")

Catherine Zeta-Jones was considered for the role of Felicity Shagwell.

Rob Lowe's impression of Robert Wagner was developed several years before its appearance in the film. Lowe dated one of Wagner's daughters.

During the Elvis Costello scene, Austin remarks to Felicity, "You're quite good on your feet." Her response, "I'm even better off my feet," was originally intended to end "on my back" but was deemed inappropriate.

Dr. Evil's base in the moon is divided in two units: Moon Unit Alpha and Moon Unit Zappa, the latter being the name of Frank Zappa's daughter.

Austin finds his way into the 21st Century with "Austin Powers in Goldmember."

Posted by The Rewatch Podcast at 4:33 PM