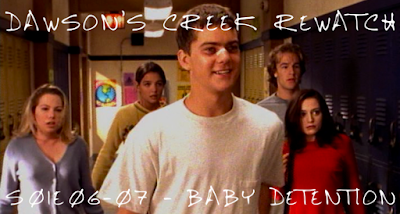 In this weeks episode of The Dawson's Creek Rewatch, Cory and Tom deliver a day of punishment as they discuss season 1 episodes 6 & 7, "Baby" and "Detention."

While Dawson attempts to hold his and Joey’s usual movie night with Jen tagging along, the evening doesn’t quite go well as Joey is uncomfortable with Jen around, and Jen won’t stay if Joey leaves due to her grandmother’s rules, leaving the young lad alone as both girls exit.

Meanwhile Pacey is fed up with always being in Tamara's house and is trying to convince Tamara that they need to go “out” for a real date, even suggesting they go to a neighboring town where people wouldn’t know them. Her reluctance leads to Pacey venting with Dawson in the school restroom where, unbeknownst to them, a fellow classmate hidden in the stalls overhears everything and begins spreading the rumor around the school. This leads to not just a lot of sneers and laughs about Pacey, but also within Ms. Jacob’s own classroom where several students make snarky comments to the teacher.

Joey returns home to find Bessie in the truck, helplessly trying to unstick their truck from the muddy ground as she tells her sister that the baby is finally coming. With Bodie off for a visit to a restaurant elsewhere and their own home out of commission, Joey rows Bessie to Dawson’s house to use their phone. The phone is of little help as the nearest ambulance is too far away, so Joey swallows her pride and goes next door to ask Grams, a former nurse, to please help. Grams comes over but when things start to turn a little south, Jen questions her, which causes Grams to take her aside and ask her to have faith in her. Dawson and Joey have a heart to heart about how Joey was there when her mother needed her, and now Bessie is the one that needs her as well. Bessie asks for medicine but of course they have nothing, leaving Grams to ask Bessie and Jen to join her in prayer as they enter the final stages of the birth, as the baby arrives in the form of a brand new son. Grams asks Jen if she’s managed to come around on God yet, and Jen says, not god, but maybe a little bit on man, as they all gather around the newborn child.

Elsewhere, Tamara talks about breaking up as Pacey tries to explain what happened but she is having none of it. Later, Pacey’s brother Doug gives Pacey a hard time about the rumors, to which he responds with his usual snarky insulting remarks, before Doug reveals that an emergency school board meeting has been called to deal with the situation. When Pacey arrives at the meeting and approaches Tamara, her lawyer intervenes and makes it known that any communication has to go through her now. The superintendent of schools begins questioning Ms. Jacobs, but Pacey intervenes, claiming that he made the entire thing up, claiming usual teenager antics, and his explanation is accepted. Pacey goes to talk to Tamara later that evening and she tells him that she is appreciative but is leaving town and the two parts, content with the memories they managed to share together.

Christopher Berry was one of the boys, Eric, in class. He’s a working actor, having appeared in movies on Amazon Prime, such as Hometown Christmas, and American Hero with Stephen Dorff. He was also in 5 episodes of the TV series The Purge and a couple handfuls of Resurrection episodes. He had small parts in Three Billboards Outside Ebbing Missouri and Spiderman Homecoming, and a Nic Cage movie called The Runner. His latest projects are The Hunt with Hilary Swank, Betty Gilpan and Ethan Suplee (a group of people wake up in a forest and are hunted).

The lawyer was played by Dorothy Recasner Brown. She was most recently in 4 episodes of the Swamp Thing reboot. Before that she had a short 5 episode stint on One Tree Hill. She had a few other roles in various movies and TV movies but they were all generic titles like “woman in store”, “judge” or “investigator.”

Traci Thunderbird Dinwiddle is listed as Sam The Waitress but I have no idea who she was in the episode.

Dawson and Joey, in the midst of another movie, have a discussion about how both guys and girls can sometimes pursue relationships based on superficial attributes with Dawson claiming that girls are attracted to romance but Joey coming right back with a stinger, asking why Jen hasn’t wanted to sleep with him yet.

This all leads to Dawson being more upset when he sees Pacey chatting with Jen and learning that he told her about Dawson’s childhood nickname Oompa Loompa. Added to the fact that Joey mentioned Pacey has bigger biceps than him, and that Pacey starts to call him by his nickname, leads Dawson to chuck a basketball at the back of his head. Unfortunately Pacey turns and takes the hit right on his nose, breaking it, as the coach orders Dawson to Saturday detention while the cheerleaders fawn over the injured young man.

Elsewhere in the school, a girl named Abby shows up late to class as Joey is giving a speech about a shogun and his harem which causes several of her jock classmates to giggle and arrogantly ask suggestive questions. Joey ignores them for the most part, putting them down with a cutting remark but it all comes to a head at lunchtime when the aforementioned jocks cut in front of her in line. After they spout off more arrogant platitudes, Joey ends up giving both of them a good punch, knocking them down but earning her detention as well.

Meanwhile, Jen, listening to a teacher explain why physicians should not be assisting people with suicides, ends up challenging the teacher, letting a curse slip out, resulting in said teacher ordering her to detention.

Saturday arrives and Dawson finds himself, Joey, Jen, Abby and Pacey in the library under the watch of Mrs. Tringle. As Mrs. Tringle goes off to do her work, Pacey refuses to tell them why he received detention. The five teens start talking about why they’re there, except for Pacey but eventually end up making catty argumentative remarks to each other. After accepting their fate for the next eight hours, they lament about how their situation is similar to the movie The Breakfast Club. For lack of anything better to do, Abby suggests they play truth or dare which leads to Pacey kissing Jen, which angers Dawson, but then also ends up with Joey kissing Dawson.

For a change of pace the kids sneak past Tringle in order to photocopy their rear ends and play a guessing game of which picture belongs to whom. Next they head to the gym where Pacey and Dawson continue their earlier game of basketball, with the bet that if Dawson wins, Pacey will tell them why he is in detention. Abby reveals that she noticed the passion in Joey and Dawson’s kiss and states that she knows that Joey is in love. Jen and Joey, who have been trading barbs, stop and Joey says that she wants to hate her but Jen really has done nothing to deserve it. Abby suddenly ends up yelling to them that they are late getting back to the library, leading to Dawson making a final basket and winning, and the group runs back but are caught by Ms Tringle and she assigns them to alphabetize the card catalog for the remainder of their time.

Dawson ends up revealing why he hates his nickname, and his frustrations about wanting to have sex with Jen, while Jen tells Dawson why she wants to take things slow. Pacey explains how he really feels about his screwed up self and Joey reveals that she can’t say what she really wants to say to Dawson for fear of messing up their friendship, as Mrs. Tringle releases them from detention.

Mike White was early in his career when he wrote this episode, and wrote several more episodes for Dawson’s Creek. Just before landing this job, he had written the script for Dead Man on Campus. He has written scripts for other films, such as Orange County, School of Rock, Nacho Libre, The Emoji Movie and Pitch Perfect 3, as well as shows like Freaks and Geeks, Pasadena and the series adaptation for School of Rock. He often acts as producer in things he writes (including Dawson’s Creek) and does cameos and/or supporting parts; you may recognise him as Ned Scheedly in School of Rock or “Victim in Bathroom” in Zombieland.

Allan Arkush got his start as a director in the early 70s, making low budget titles such as Hollywood Boulevard, Deathsport and Rock n’ Roll High School. He also did several music videos for The Ramones, Dokken and Bette Middler, before heading into television. He went on to direct for shows such as The New Twilight Zone, St. Elsewhere, Moonlighting, Ally McBeal, Crossing Jordan, Heroes, Franklin & Bash, CSI Cyber and A Series of Unfortunate Events, just to name a few. He also directed Caddyshack II, and the TV movie Shake, Rattle & Rock! with Renne Zellwegger.

Mrs. Tringle was played by Helen Baldwin. She’s had a small handful of minor roles, and directed two shorts called Songbird (a street musician finds a magical camera that opens a door to his dark side), and Saint Dee Dee ( a day in the life of a hospice worker ending in an epiphany).

Abby Morgan was played by Monica Keena. She starred most recently in The Ghost and the Whale (a bipolar man loses wife at sea, blames a whale, brothers want answers and revenge). She was also in Aftermath (nuclear war survivors), and 40 Days and Nights (sea levels rise to disaster proportions). She had a minor role in a Lifetime movie called All She Wants For Christmas and another movie called Loaded (a rich kid’s life spirals into an out of control world of drug sex and violence). She was in Judd Apatow’s Undeclared as a lead.

For more information on Dawson's Creek, please check out these great resources of information. We thank the individuals who moderate these sites and appreciate their hard work.
What Song
IMDb
Wikipedia
The Atlantic

Head over to our TeePublic store today and buy some merch! Every item sold sees a small return to us to cover our hosting costs.

Posted by The Rewatch Podcast at 1:32 PM