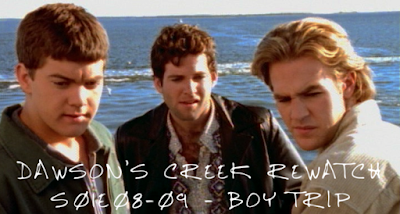 In this weeks episode of The Dawson's Creek Rewatch, Cory and Tom play good guy and bad guy as they discuss season 1 episodes 8 & 9, "Boyfriend" and "Roadtrip."

When Jen’s ex boyfriend, Billy, from New York City comes visiting, Dawson finds himself stuck between a rock and a hard place due to the fact that Jen doesn’t seem completely done with her past love. Dawson finds himself playing host to Billy since he has no place else to stay and things go about as well as can be expected as Billy tries to goad Dawson into asking about the details of Jen’s past relationship.

Mitch and Gail are slowly working through their marriage issues, but Mitch finds it hard not to take jabs at her due to the amount of hurt he still feels. Dawson later talks with his dad and learns that every relationship comes with its issues and problems, and that it’s not unique to Dawson’s current situation.

Meanwhile, Joey is trying to get through her days with little to no sleep due to the newborn baby. When Pacey invites her to crash a beach party, Bessie lets her leave the restaurant and the two head off. Dawson arrives at the party, Jen-Less due to her meeting with Billy, and with Pacey off trying to score with any available girl, Joey and Dawson agree to get a quick drink and then head back to his place for movies. Jen however, shows up after having said goodbye to Billy, leaving him with a quick short kiss, and her and Dawson take a walk to talk about what has been going on between them.  Unfortunately Billy shows up and claims that Jen’s goodbye kiss wasn’t really to say goodbye and he and Dawson argue before Jen walks away from them both.

Joey, upset by being ditched, ends up drinking a bit too much with a guy named Tyler. Pacey comes to her rescue when Tyler tries to push more alcohol on her and then takes a swipe at Pacey but he ducks and manages to land a punch that knocks the drunken Tyler out.

Dawson and Pacey get the drunken Joey back to her place with Dawson tucking her in while Pacey recites the plot of the movie The English Patient to the newborn baby which puts the child to sleep. As the two friends row home, Dawson tells Pacey that Joey kissed him before she passed out which pushes Pacey to chide his friend for not realizing that Joey is in love with him. Dawson responds that it’s just friendship and not love, which he truly found in Jen.

Dawson arrives home to find Billy admitting defeat and leaving to head back to the city. Dawson goes to find Jen on the docks and the two begin talking but she reveals to him that she ended things with not just Billy, but with Dawson too, that she needs time to figure out herself before she can really be happy in any relationship. Dawson tries to plead his case but ends up walking away, leaving her with a few choice words about needing something who is capable of a loving, committed relationship, someone who isn’t her.

Billy was played by Eion Bailey. His latest project is Deliver By Christmas, a holiday movie from Hallmark that came out just this past month and boasts a promo picture that shows Eion looking like Bradley Cooper. He did other Hallmark movies, including Switched for Christmas in 2017, and Candles on Bay Street in 2007. He was also in Once Upon A Time as August W. Booth for a run of 21 episodes spread out over 6 seasons, and made appearances in Stalker, Covert Affairs, ER, Band of Brothers and Ray Donovan. He had bit parts in Almost Famous and Fight Club, and was a lead in The Canyon (couple surviving while lost in the Grand Canyon), Language of the Enemy (a man visiting Jerusalem gets pulled into a world of violent intrigue after meeting a mysterious woman). He also starred opposite Antonio Banderas in And Starring Pancho Villa as Himself. 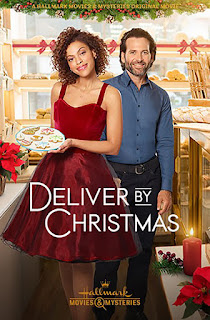 Billy returns to Capeside after hearing about Jen’s dumping of him and uses Dawson’s ladder to climb into Jen’s bedroom window where he is discovered by Grams and given two minutes to leave before she calls the cops. Jen gives him the cold shoulder again, leaving him to find Dawson at the school and convince him to go to a club with him, a way to nurse their wounds after having been dumped by the same girl.

Meanwhile Joey gets a ride to school from a jock named Warren and though he hits on her arrogantly, nothing else transpires between them. Later Jen approaches Joey and tells her that Warren is spreading rumors that the two slept together. When Joey tries to confront Warren, he twists the conversation so it looks like Joey is trying to get him to commit, leaving Jen to come up with a revenge plan.

At the club, Dawson, Billy, and Pacey (who tags along) are talking and surveying the women in the club, with Billy attempting to goad Dawson into hitting on women. Dawson picks out a girl with a Film Threat t-shirt named Nina and while at first she rebuffs him, he keeps talking with her and the two discover they have some things in common.

Meanwhile, Joey and Jen’s revenge makes use of rumor monger Abby, spreading around the lie that Warren actually got Joey pregnant and won’t take responsibility. This has the side effect of Joey being instructed by Mrs Tringle to take the parenting classes and Warren getting lectured about contraceptives. Abby reveals that apparently Warren couldn’t actually impregnante Joey because according to his ex girlfriend he has problems achieving liftoff when it comes to sex. Joey threatens to confirm his failure to launch and Warren relents to telling the truth, asking Joey on a real date but she refuses.

Dawson leaves the club with Nina after Billy interrupts them and he explains to her that he is still heartbroken about a girl and wouldn’t feel right going back to her place, even if it is just to hang out and watch movies. She understands and leaves him with a kiss, telling him to call if the girl doesn’t come to her senses.

Billy comes out and tries to goad Dawson on further but he has none of it, explaining that he doesn’t want to be like Billy and do the things he does to women. Billy takes offense and leaves him and Pacey to find their own way back home to Capeside. Upon returning home, Dawson finds Joey waiting to hang out and talk but Dawson is too exhausted. He does reveal that after days of not being able to stop thinking about Jen, there was a time tonight where he didn’t think of her and it was like seeing the world anew as he drifts off to sleep, promising they can talk later, leaving Joey to say she can wait.

J.M. Rodriguez was one of the rednecks. He’s had a few bit parts, but he'll return in a later season as a Prison Guard.

Warren was played by Eric Balfour. His first role was Eric in Kids Incorporated. He had bit parts in Trojan War and Can’t Hardly Wait. He's been in The West Wing, NYPD Blue, Buffy, and The OC among many other shows. His bigger series as a supporting actor were Significant Others, Six Feet Under, Veritas: The Quest, Hawaii, 24 and a show called Haven (5 seasons, cop goes to town to help with a murder and learns about her past there as well as supernatural events). Most recently he has had a recurring role in the new Charmed series.

Nina was played by Melissa McBride. She's most well known as Carol in The Walking Dead. She was also one of the main supporting cast in The Happy's (a girl catches guy cheating, marries him anyway, deals with life) and The Resurrection of William Zero (a guy loses memory, learns his identity from twin brother). She will also return in a later season as Melanie.

For more information on Dawson's Creek, please check out these great resources of information. We thank the individuals who moderate these sites and appreciate their hard work.
What Song
IMDb
Wikipedia
The Atlantic

Head over to our TeePublic store today and buy some merch! Every item sold sees a small return to us to cover our hosting costs.

Posted by The Rewatch Podcast at 1:22 PM