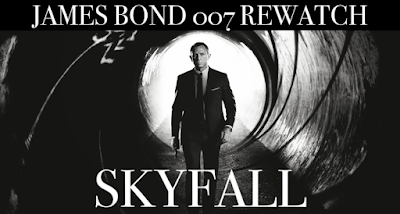 In this episode of the James Bond 007 Rewatch, Cory and Nathan take the high ground as they discuss "Skyfall."

The Music of Skyfall:

In early 2011, Sony Pictures President of Music Lia Vollack suggested to the James Bond film producers at Eon Productions that they ask Adele to record a theme song for their next Bond film, later revealed to be titled Skyfall.

The theme song, and the identity of its singer, was kept secret, but rumours of Adele's involvement still emerged. Adele first mentioned recording a "special project" in September 2011 in an interview on The Jonathan Ross Show, leading to speculation in the media that she was recording a Bond theme. In an interview with NRJ in April 2012, the singer stated that she intended to release a new single by the end of the year; however, it would not be preceding a new album. The song's title was originally rumoured to be "Let the Sky Fall". In September 2012, OneRepublic vocalist Ryan Tedder posted a message on Twitter claiming he had heard the title track and that it was "the best James Bond theme in his lifetime". Adele's publicist, Paul Moss, mentioned the song on his Twitter feed; both later deleted their messages. The artwork for the song was leaked online, but Adele's involvement in the project was not officially confirmed until 1 October.

Adele, who had just released her second album, 21, admitted that initially she was a "little hesitant" about agreeing to write a Bond theme song. On meeting with the Skyfall film crew, the singer had told Skyfall director Sam Mendes that she felt as though she was not the person they were looking for because "my songs are personal, I write from the heart". Mendes simply replied "just write a personal song", telling her to use Carly Simon's "Nobody Does It Better" from The Spy Who Loved Me as an inspiration. Adele left the meeting with the script of Skyfall and upon reading it, decided that it was a "no-brainer", as she "fell in love" with the film's plot. Producer Paul Epworth, who had worked with Adele on 21, was brought in to help her write the song. Adele stated that she enjoyed working to a brief and set of guidelines, even though it was something she had never done before.

"Skyfall" was written by Adele and producer Paul Epworth and features orchestration by J. A. C. Redford. The film company Eon Productions invited the singer to work on the theme song in early 2011, a task that Adele accepted after reading the film's script. While composing the song, Adele and Epworth aimed to capture the mood and style of the other Bond themes, including dark and moody lyrics descriptive of the film's plot.

"Skyfall" was released at 0:07 BST on 5 October 2012 as part of the Global James Bond Day, celebrating the 50th anniversary of the release of Dr. No, the first James Bond film. "Skyfall" received universal acclaim from music critics and was a major commercial success. It reached number one in 11 countries and top five in various regions. It peaked at number two on the UK Singles Chart and number eight on the US Billboard Hot 100. With sales of 7.2 million copies worldwide, "Skyfall" is one of the best selling digital singles of all time.

The song was not included on the soundtrack album, marking the second time in the Bond series that the theme song was split from the soundtrack album, following "You Know My Name" from Casino Royale in 2006. Wilson and Broccoli still asked composer Thomas Newman to include a reference to "Skyfall" in the film's score "so that it didn't appear as a kind of 'one off' at the top of the movie". Newman opted to include an interpolation in the track "Komodo Dragon", used in a scene where Bond enters a casino in Macau. According to Newman, the scene had "a real moment of 'Bond' swagger", and the music fit the scene accordingly. Epworth was visited by Newman for advice, and Redford, who was already doing the score's orchestration, was requested to arrange "Komodo Dragon"; Newman was unable to do the arrangement because he felt that his task "was already so huge and daunting".

Production of Skyfall was suspended throughout 2010 because of MGM's financial troubles. Preproduction resumed following MGM's exit from bankruptcy on 21 December 2010, and in January 2011, the film was officially given a release date of 9 November 2012. Subsequently, MGM and Sony Pictures announced that the UK release date would be brought forward to 26 October 2012, two weeks ahead of the US release date.

Mendes first signed on to direct the project shortly after Quantum of Solace was released, and remained as a consultant during the uncertainty surrounding MGM's financial situation. Mendes had previously worked with Craig on Road to Perdition. He was at first hesitant, as the job had little appeal to him, but he did not reject the offer immediately because of Craig's involvement and enthusiasm.

In fifty years of James Bond movies, this is only the second one in which Bond suffers a gunshot wound. (He was also shot in Thunderball (1965) during the Junkanoo chase.)

The first time a character is audibly heard saying the "f" word in a James Bond movie. In The Living Daylights (1987), Bond (Timothy Dalton) clearly said "For fu-k's sake!", but it couldn't be heard due to plane engine noise. This movie is the first Bond movie to use an audible variation of the "f" word, said by M (Dame Judi Dench) at Skyfall Lodge.

Dame Judi Dench has more screen time in this movie alone than Desmond Llewelyn had in his seventeen movies as Q, making her portrayal of M the most recurrent character in the franchise, after Bond (as measured by screen time).

Final of twenty-three James Bond movies for trumpet player Derek Watkins, who had worked in the music department as a trumpeter on every James Bond movie since he was 17 years old, when he worked on Dr. No (1962). Watkins died in 2013, four months after the release of this movie.

After receiving a personal invitation from Her Majesty Queen Elizabeth II , Daniel Craig appeared as James Bond in promotion of this movie at the Opening Ceremony of the 2012 Olympic Games in London in the games' introductory video originally titled, "The Arrival", but later known as "Happy and Glorious". The Daniel Craig and Queen Elizabeth II pretend entertainment segment featured Craig as James Bond who meets with the Queen to escort her safely to the stadium. They are seen going to a helicopter, which flies along the Thames River to the cauldron, whereby stunt doubles then "skyfall" jumped out of the helicopters down to the awaiting ceremony to familiar James Bond music. The segment has been said to be the Queen's first acting role.

We face an old foe in "Spectre."

Posted by The Rewatch Podcast at 1:32 PM