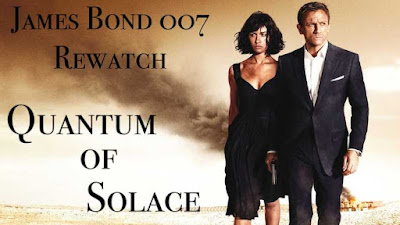 In this episode of the James Bond 007 Rewatch, Cory and Nathan keep a close eye on their environment as they discuss "Quantum of Solace."

The Music of Quantum of Solace:

Jack White of The White Stripes and Alicia Keys collaborated on "Another Way to Die," the first Bond music duet. They had wanted to work together for two years beforehand. The song was recorded in Nashville, Tennessee; White played the drums while Keys performed on the piano. The Memphis Horns also contributed to the track. White's favourite Bond theme is John Barry's instrumental piece for On Her Majesty's Secret Service, and he watched various opening credit sequences from the series for inspiration while mixing the track.

Sir Paul McCartney turned down the offer to write a new James Bond song for this movie, and recommended singer-songwriter Amy Winehouse for the job. Winehouse recorded a demo with music producer Mark Ronson. The demo was not used for reasons linked to Winehouse's inability to record music at a time due to her well publicized personal situation.

David Arnold, who composed the scores for the previous four Bond films, returned for Quantum of Solace. He said that Forster likes to work very closely with his composers and that, in comparison to the accelerated schedule he was tied to on Casino Royale, the intention was to spend a long time scoring the film to "really work it out." He also said he would be "taking a different approach" with the score. Arnold composed the music based on impressions from reading the script, and Forster edited those into the film. As with Casino Royale, Arnold kept use of the "James Bond Theme" to a minimum. Arnold collaborated with Kieran Hebden for "Crawl, End Crawl," a remix of the score played during the end credits.

In July 2006, as Casino Royale entered post-production, Eon Productions announced that the next film would be based on an original idea by producer Michael G. Wilson. It was decided beforehand the film would be a direct sequel, to exploit Bond's emotions following Vesper's death in the previous film.

Roger Michell, who directed Craig in Enduring Love and The Mother, was in negotiations to direct, but opted out because there was no script. Marc Forster was surprised that he was approached for the job, stating he was not a big Bond film fan, and that he would not have accepted had he not seen Casino Royale which he felt had humanised Bond.

Marc Forster on the political landscape of the film:

Because Bond plays it real, I thought the political circumstances should be real too, even though Bond shouldn't be a political film. I thought the more political I make it, the more real it feels, not just with Bolivia and what's happening in Haiti, but with all these corporations like Shell and Chevron saying they're green because it's so fashionable to be green. During the Cold War, everything was very clear, the good guys and the bad guys. Today there's much overlapping of good and bad. It isn't as morally distinct, because we all have both elements in us.

Haggis, Forster and Wilson rewrote the story. Haggis said he completed his script two hours before the 2007â€“2008 Writers Guild of America strike officially began. Forster noted a running theme in his films was emotionally repressed protagonists, and the theme of the picture would be Bond learning to trust after feeling betrayed by Vesper.

As the first direct sequel, Daniel Craig commented: "We felt we needed to tie up the loose ends from Casino Royale (2006), and make sure people realize we are back making Bond movies. For me, it's about creating something that is going to stand alone, but if you put the two films together, you're going to have an incredible experience, because you will see one continuous story."

With an estimated $225 million budget, to date, this is the most expensive James Bond movie ever made.

Daniel Craig was injured at least three times during the making of this movie. The most prominent ones included an injury to his face, which required four stitches, another to his shoulder, which required six surgical screws to be inserted in an operation, and his arm in a sling, and then his hand was injured when one of his fingertips was sliced off. He laughed these off, noting they did not delay filming, and joked his finger wound would enable him to have a criminal career. He also had minor plastic surgery on his face.

A free-fall scene with James Bond (Daniel Craig) and Camille (Olga Kurylenko) was shot in the Bodyflight Wind Tunnel in Bedford, with seventeen small digital cameras. It was going to be shot in the conventional way (with a large fan blowing in the cast members' faces), but Craig disliked the idea of a fan in his face, and stunt coordinator Gary Powell suggested filming in a wind tunnel. For safety, Daniel Craig and Olga Kurylenko shot for only thirty seconds periodically, and wore wind-resistant contact lenses that enabled them to open their eyes as they fell.

This movie marks the first time since You Only Live Twice (1967) that Bond does not introduce himself with the catchphrase "Bond, James Bond." The line was shot for several different scenes, but was completely cut out, as director Marc Forster and the producers found it unnecessary. (From Russia with Love (1963), and Thunderball (1965) also do not use the line) The other staple Bond line stating a "vodka martini, shaken not stirred" does not appear in this movie either.

Things get personal with Bond in "Skyfall."

Posted by The Rewatch Podcast at 1:06 PM