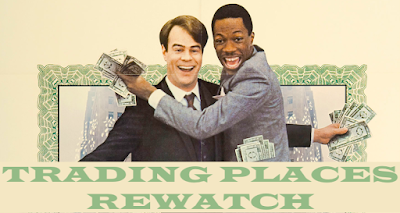 In this episode of The Rewatch Podcast, Cory and Nathan are celebrating Christmas and New Year unofficially as they discuss "Trading Places."

Trading Places was considered a box-office success on its release, earning over $90.4 million to become the fourth-highest-grossing film of 1983 in North America. It also received generally positive reviews. Reviewers were consistent in their praise for the central cast, and they appreciated the film's revival of the screwball comedy genre prevalent in the 1930s and 1940s. Criticism focused on the film lacking the same moral message of the genre while promoting the accumulation of wealth. It received multiple award nominations including an Academy Award for Bernstein's score and won two BAFTA awards for Elliott and Curtis. The film launched or revitalized the careers of its main cast, who each appeared in several other films throughout the 1980s. In particular, Murphy became one of the highest-paid and most sought after comedians in Hollywood.

In the years since its release, the film has been reassessed in positive and negative terms. It has been praised as one of the greatest comedy films and Christmas films ever made, but retrospective assessments have criticized its use of racial jokes and language. In 2010, the film was referenced in Congressional testimony concerning the reform of the commodities trading market designed to prevent the insider trading demonstrated in Trading Places. In 1988, Bellamy and Ameche reprised their characters for Murphy's comedy film Coming to America.

In the early 1980s, writer Timothy Harris often played tennis against two wealthy but frugal brothers who were regularly engaged in a competitive rivalry and betting. Following one session, Harris returned home exasperated with the pair's conflict and concluded that they were "awful" people. The situation gave him the idea of two brothers betting over nature versus nurture in terms of human ability. Harris shared the idea with his writing partner Herschel Weingrod, who liked the concept. Harris also drew inspiration for the story from his own living situation; he lived in a rundown area near Fairfax Avenue in Los Angeles. He described the area in grim terms as crime-ridden, where everyone either had had a gun pointed at them or had been raped.

Trading Places was developed with the intent to cast comedy duo Richard Pryor and Gene Wilder as Billy Ray Valentine and Louis Winthorpe III respectively. The pair were in high demand following the success of their comedy film Stir Crazy (1980). When Pryor was severely injured after setting fire to himself while freebasing cocaine, the decision was made to cast someone else. Paramount Pictures suggested Eddie Murphy. The studio was initially unhappy with Murphy's performance in his first film, the as-yet-unreleased action-comedy 48 Hrs. (1983)—a film also conceived as a Pryor project. However, that film was well received by preview test audiences, leading the studio to reverse its opinion. Landis was unaware of Murphy, who had been gaining fame as a performer on Saturday Night Live. After watching Murphy's audition tapes, Landis was impressed enough to travel to New York City to meet with him. Murphy said that he was paid $350,000 for the role; it was reported that the figure was as high as $1 million.

Landis wanted Dan Aykroyd to serve as Murphy's co-star. He had worked previously with Aykroyd on the musical comedy film The Blues Brothers (1980); the experience had been positive. Landis said, "he could easily play [Winthorpe] ... you tell him what you want, and he delivers. And I thought he'd be wonderful." Paramount Pictures was less enamored with Aykroyd; executives believed that he performed better as part of a duo, as he had working with John Belushi. They felt that Aykroyd working alone would be akin to Bud Abbott, half of Abbott and Costello, working without Lou Costello and Aykroyd's recent films had fared poorly at the box office. Aykroyd agreed to take a pay cut for the role.

The studio also objected to the casting of Jamie Lee Curtis. At the time she was seen as a "scream queen", primarily associated with low-quality B movies. Landis had worked previously with Curtis on the horror documentary Coming Soon, for which she had served as the host. She wanted to move away from horror films as she was conscious that the association would limit her future career prospects. She had turned down a role in the horror film Psycho II (1983) because of this. Her mother, Janet Leigh, had famously starred in Psycho (1960). Curtis had performed recently in the slasher film Halloween II (1981) as a favor to director John Carpenter and producer Debra Hill; she was paid $1 million for that role, but received only $70,000 for Trading Places. When asked if she had researched her role as a prostitute, Curtis jokingly remarked: "I'd love to say I went out and turned a couple of tricks on 42nd Street, but I didn't." Curtis had long hair when she was cast; costume designer Deborah Nadoolman Landis suggested cutting her hair shorter for the film.

Was filmed immediately after the "Twilight Zone: The Movie (1983) "accident, when Vic Morrow and two child actors were killed when a helicopter crashed during production. John Landis was later tried and acquitted of manslaughter, the first time in history that a Hollywood director was charged for a death which had occurred on-set.

'Tis the season to holiday with Arnold Schwarzenegger, starting Christmas day and our Jingle All the Way Rewatch!

Posted by The Rewatch Podcast at 12:59 PM