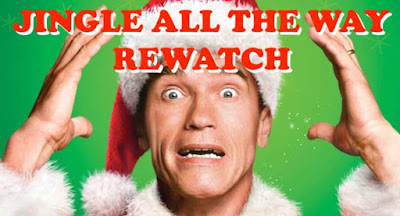 In this episode of The Rewatch Podcast, Cory and Nathan are on the hunt for the perfect Christmas as they discuss "Jingle All the Way."

The film draws inspiration from the high demand for Christmas toys such as the Cabbage Patch Kids and Mighty Morphin Power Rangers in the late 1980s and early 1990s, which often led to intense searching and occasional violence among shoppers over finding the toys. Randy Kornfield wrote the film's original screenplay after witnessing his in-laws go to a Santa Monica toy store at dawn in order to get his son a Power Ranger.

Arnold Schwarzenegger was quickly cast. He became available in February 1996 after Fox's remake of Planet of the Apes was held up again. Schwarzenegger was paid a reported $20 million for the role. He enjoyed the film, having experienced last-minute Christmas shopping himself, and was attracted to playing an "ordinary" character in a family film.

Columbus initially wanted Joe Pesci to play Myron. Comedian Sinbad was chosen instead, partly due to his similar height and size to Schwarzenegger. Sinbad was suggested for the part by Schwarzenegger's agent, but the producers felt he was unsuited to the role of a villain as it could harm his clean, family-oriented comedy act and reputation, although Sinbad felt the character would generate the audience's sympathy rather than hate.

Danny Woodburn plays Santa's Elf in this film. Woodburn also played an elf on an episode of Seinfeld (1989), as well as a two-part episode of Baywatch (1989).

Tim Allen was considered for the role of Howard Langston.

Verne Troyer has an uncredited role as the shortest Santa that gets punched while on Arnold Schwarzenegger in the warehouse.

On review aggregator website Rotten Tomatoes, the film holds an approval rating of 15% based on 46 reviews and an average rating of 3.9/10. The site's critical consensus reads, "Arnold Schwarzenegger tries his best, but Jingle All the Way suffers from an uneven tone, shifting wildly from a would-be satire on materialism to an antic, slapstick yuk-fest."

In 1998, Murray Hill Publishing sued 20th Century Fox for $150,000, claiming that the idea for the film was stolen from a screenplay they had purchased from high school teacher Brian Webster entitled Could This Be Christmas? They said the script had 36 similarities with Jingle All the Way, including the plot, dialogue and character names. Murray Hill President Bob Laurel bought the script from Webster in 1993, and sent it to Fox and other studios in 1994 but received no response and claimed the idea was copied by Kornfield, who was Fox's script reader. In 2001, Fox were found guilty of stealing the idea and ordered to pay $19 million ($15 million in damages and $4 million in legal costs) to Murray Hill, with Webster to receive a portion. Laurel died a few months after the verdict, before receiving any of the money. On appeal, the damages figure was lowered to $1.5 million, before the verdict itself was quashed in 2004 after a judge decided the idea was not stolen, as Fox had bought Kornfield's screenplay before he or anybody else at Fox had read Could This Be Christmas?

Over 18 years after the release of the original film, a stand-alone sequel, Jingle All the Way 2, was released straight-to-DVD in December 2014. Directed by Alex Zamm and produced by WWE Studios and 20th Century Fox, the film has a similar plot to the original, but is otherwise not connected and has none of the original cast or characters. The lead roles were instead played by Larry the Cable Guy and Santino Marella.

Now to bring in the new year with Arnold Schwarzenegger! Join us next time as we discuss "End of Days."

Posted by The Rewatch Podcast at 12:15 PM