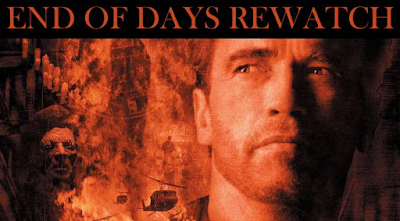 In this episode of The Rewatch Podcast, Cory and Nathan party like it's 1999 as they discuss "End of Days."

There are several ads in the background in different scenes that read "NY2K are you ready?". Y2K was shorthand for "Year 2000" and there was a widespread fear that computer operating systems would crash because only the last two digits of the year were used to indicate dates, and it was feared computers would read the "00" as 1900 causing mayhem. There were even email suggestions going around that in the year 1999 people should change the year of their VCR's to 1976 because the days of the week (starting March 1) would be the same for both years. The fear of a Y2K meltdown was exaggerated, as timely programming fixes were able to prevent a major catastrophe.

Directors Sam Raimi and Guillermo del Toro were offered End of Days, but turned it down due to other projects. Marcus Nispel was going to direct the film, but he left because of budget and script problems and was replaced by Peter Hyams.

Marcus Nispel quit the project not because of creative differences but because of embarrassment when a 64-page manifesto of his on-set demands was leaked to the press.

The role of Jericho Cane was written for Tom Cruise, but he chose to work on Magnolia and Arnold Schwarzenegger was then cast. Liv Tyler was the first choice for the role of Christine York, but she declined over contractual issues. Kate Winslet was then set to play the character, but she dropped out and Robin Tunney replaced her.

Arnold Schwarzenegger's first film since Batman & Robin (1997). The reason for the gap was because of his heart surgery after playing Mr Freeze; the studios were anxious about whether or not they could insure him, and despite attempts to convince them he was in perfect health, he couldn't get any work until End of Days (1999). Even then, he was amazed when insurance people and executives from Universal came to the set just to watch him, to see if he was still up to the action scenes. They asked Schwarzenegger if he enjoyed this kind of punishment, but he said he was used to it. After the first week of shooting, the insurance guys backed off and not long after, the film offers started rolling in again.

According to Hyams, “Jim Cameron was the kind of godfather of me doing that film, because of his relationship with Schwarzenegger. He told me I was doing it! ... End Of Days was going to be Marcus Nispel, but it wasn't working somehow, but they had Arnold and a start date, and Jim came to me and told me I had to do it. This was the first picture Arnold had made for a couple of years. I think he had a heart thing. So this was Arnold coming back. And he wanted to try to make something good, and to take some chances. I applauded that. And we had very, very good actors around him, like Gabriel Byrne and Kevin Pollak and Rod Steiger. It was a very enjoyable experience. Half way through shooting I told Arnold I thought he should die in this movie. Of course Universal blanched at the idea, so I shot the ending both ways, and everybody agreed that the dying ending was the better one.”

An alternate ending had Jericho die, and Christine tearfully embraces his body and thanks him for saving her life. Suddenly, God removes the sword from Jericho's body and heals his wounds, bringing him back to life. Christine is surprised and glad Jericho is back, and they embrace before leaving the church together.

Years later, Miriam Margolyes revealed on a talk show she did not enjoy her first and only working experience with Arnold, citing the odd reason that in their scene together "He farted in my face!"

Gabriel Byrne plays both good and evil in the same year, Satan in this film and a Catholic priest in Stigmata (1999).

One of three movies revolving on Satanic appearances to get a release in 1999 (also interpreted as 666 with the numbers put upside down), with the other films being The Ninth Gate (1999) and Stigmata (1999).

Udo Kier claimed in an interview that he was considered for the role of Satan in the film but the producers didn't want the hero and villain to both have German/Austrian accents, and he was eventually cast in a secondary role.

End of Days was the last movie to be pressed in the laserdisc format in the United States.

Our first rewatch of 2021 takes us to director Wes Anderson! The rewatch starts with "Bottle Rocket," we hope you'll join us.

Posted by The Rewatch Podcast at 10:03 PM